2007-09 Recession Data and the Rich, Millionaires take their blows

So, I put this in political forum because this is and will be a huge a political issue in the campaign(s) ( as it already has been made so).

Call it Class Warfare, a leveling out of whos got what and why they should or should not be pay more or less, what they have paid in the past
The truth of the matter is; one of the great strengths of America has always been an upwardly mobile nation, one can given sufficient talent , ambition, grit lift oneself UP..and, as in all things there is a balance , that upward mobility driven by those great leveler s of innovation, determination, talent, can also via creative destruction, mismanagement, bad luck what have you, put you DOWN.

Despite the medias/politicians best attempts at making it appear so, the rich just dont sit around lighting $20 cigars with $100 dollar billsthe jungle of life can provide sustenance or it can eat you up. When the beast gets hungry it doesnt care what you make or what you are or are not. 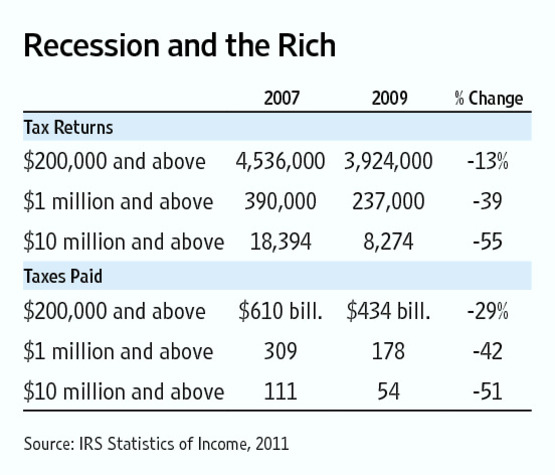 Millionaires Go Missing
There's nothing like a recession to level incomes.

These disappearing millionaires go a long way toward explaining why federal tax revenues have sunk to 15% of GDP in recent years. The loss of millionaires accounts for at least $130 billion of the higher federal budget deficit in 2009.

If Warren Buffett wants to reduce the deficit, he should encourage policies to create more millionaires, not campaign to tax them more.

The millionaires who are left still pay a mountain of tax.

Yet the 3% are the people that President Obama claims don't pay their fair share. Before the recession, the $200,000 income group paid 54.5% of the income tax.

For the past three decades, the political left has obsessed about income inequality. As the economy experienced one of the largest and lengthiest economic booms in history from 1982-2007, the left moaned that the gains went to yacht club members.

Well, if equality of income is the priority, liberals should be thrilled with the last four years. The recession and weak recovery have been income levelers. Those who make more than $200,000 captured one-quarter of the $7.6 trillion in total income in 2009.

more at
Review & Outlook: Millionaires Go Missing - WSJ.com
Naphta to Settembrini;
It is ultimately a cruel misunderstanding of youth to believe it will find its hearts desire in freedom, when truly, its deepest desire is to obey. ( Der Zauberberg)
OP

bump
Naphta to Settembrini;
It is ultimately a cruel misunderstanding of youth to believe it will find its hearts desire in freedom, when truly, its deepest desire is to obey. ( Der Zauberberg)
You must log in or register to reply here.

Americans LAST...In AMERICA: Democrats / Liberals Put Foreign Illegals ahead of Americans IN AMERICA & US Tax Payers Pay For It

Why are liberals angry at Trump for using a tax loophole that was signed into law by Obama?
8 9 10

42 Reconciliation Policies That Will Wreck The US

Day 785 of the COVID "Vaccines": Another Healthy 21-Year-Old Dies Suddenly In His Sleep. Autopsies Have Proved Direct Causation.

The Unoriginality of "Trump Derangement Syndrome":