Summary: Melting in Greenland in 2011 was still above the average (1979  2010 baseline period), exceptionally high over the west coast and reaching close-to-record simulated surface mass balance, bare ice exposure, albedo and runoff anomalies.
The melting index (e.g., the number of melting days times the area subject to melting) in 2011 estimated from spaceborne microwave observations using the approach in (Tedesco, 2007) did not break the previous record set in 2010 (e.g., Tedesco et al., 2011). However, 2011 is positioning itself 6th in terms of melting index, after 2010, 2007, 1998, 2002, 2005. An alternative approach using microwave data as well (Mote and Anderson, 2005) indicates that melt extent for the period June through August 2011 ranked third since 1979, following 2010 and 2007. Satellites data cannot produce estimates of runoff and liquid water content. However, these can be analyzed by means of models. The model used in this analysis (MAR, e.g., Tedesco et al., 2011) indicates that 2011 was comparable to the record season of 2010 with respect to runoff, surface mass balance, albedo and bare ice exposure. Strong negative surface mass balance anomalies occurred in 2011, according to MAR (e.g., the loss in 2011 and 2010 were much higher than the gained mass because of accumulation). Surface albedo simulated by MAR was consistently below or around 2 standard deviations below the mean for the period June  August (e.g., more solar radiation absorbed supporting more melting, see Figure 4 for a diagram). The bare ice area exposed during the summer of 2011 was also large with respect to the mean (close to up 3 standard deviations for the month of July), similarly to what happened in 2010. 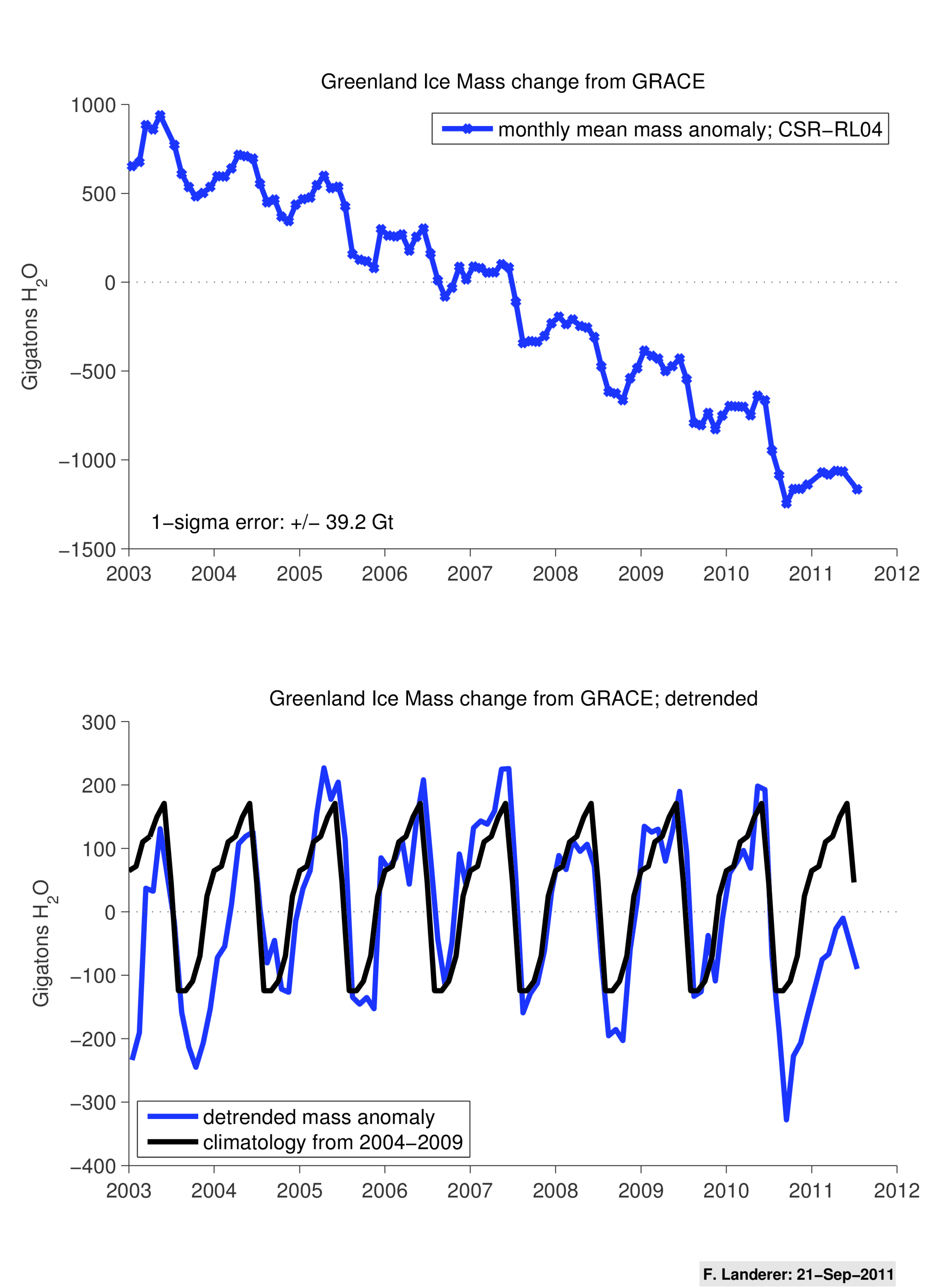 Before you insult it you need to understand that this is the yearly loss rate. This year didn't increase over 2010 rate, but still 300-500 gt is a lot of ice. This is fairly normal based on this graph to do this too.
Last edited: Sep 21, 2011

So where is the water going? If the ice is melting at a record rate, why has sea level leveled off and starting to drop? Isn't melting ice in Greenland suppose to have us all heading for high ground?

Here, have a look.

What is your answer? End all human activity, plug the volcanoes?
Your President Can Go Fuck Himself

“Democracy is the art and science of running the circus from the monkey cage” ~ H. L. Mencken
​
O

This states what Mathew just posed. How does it in any way support you, Bent?

On the recent elevation changes at the Flade Isblink Ice Cap, northern Greenland

Bent, you seem to be just throwing scientific articles up there, irregardless of what they state. What does this have to do with your statement concerning the supposedly falling sea levels?

Abstract. We investigate the interannual and decadal variability
of the North Atlantic atmospheric blocking frequency
and distribution in connection with long-term observational
and proxy records from southwestern Greenland. It is shown
that warm (cold) conditions in southwestern Greenland during
winter are related with high (low) blocking activity in
the Greenland-Scandinavian region. The pattern of winter
temperature-blocking variability is more complex than the
blocking pattern associated to the North Atlantic Oscillation
(NAO). We find, furthermore, that a North Atlantic blocking
index is significantly correlated with seasonally resolved
stable isotope records from Greenland ice cores. Both suggest
a possible reconstruction of blocking variability in this
region. During summer, high (low) blocking activity in the
Euro-Atlantic region is associated with cold (warm) conditions
in southwestern Greenland. We conclude that historical
temperature records, as well as proxy data from Greenland,
can be used to obtain information related to interannual and
multidecadal variation of winter and summer blocking during
past periods.
O

Well, obviously, Bent, you never read a single one of the abstracts of these articles, just threw them up to look as if you had some science to support your nonsense. LOL

The difference between Eemian and Holocene stable oxygen isotope values has been combined with an ice sheet flow model constrained by the ice core results and internal radio echo sounding layers, to estimate the volume of the Greenland Ice Sheet 120,000 years ago.

The results show that South Greenland has not been ice-free during the Eemian period, and that the sea level contribution from the Greenland Ice Sheet has been 1 to 2 meters.

why should he read your nonsense? You don't...
"Part of the issue is that the science behind AGW is over." -PMZ

"I agree that science is never over."-PMZ, from the same thread...

"Before Einstein, scientists stated the energy could not be created nor destroyed. After Einstein, that was ammended by the addition of, "by ordinary means", neglecting of course that on a universal scale there is nothing more ordinary than nuclear fusion." -PMZ explaining his version of conservation of energy..

What is your answer? End all human activity, plug the volcanoes?
Click to expand...

Try reading for comprehension rocks. If you still don't get it, then I will explain it to you. Perhaps you simply need public humiliation at my hands. Is that it?
I

a while back I posted up an article on an ice core drill in Alaska. it didnt give the right results, the glacier was only about 2000 years old. what happened to the info? it simply didnt get publishedother than the preliminary report required by law. this type of thing is a lot more common than people think. Hughes' grad student updated one of the european tree ring data sets and earned her doctorate (Hughes signed the forms). unfortunately the new results dont match the old ones. what happened? the new data were buried. gone. and Hughes continues to use the old data even though he knows there is new info. Hughes is the H in MBH98, 99 by the way. there are other examples of this and there has been numerous instances of climate scientist flatly refusing to release their data to outsiders trying to replicate the results.

anyways, in one measured glacier in Alaska the Roman Warm Period was warm enough that there was no glacier there. is this proof that it was just as warm then as now? no but it is indicative that climate warms and cools and that the world doesnt stop spinning when some ice disappears.

How are the models that match up with our emissions doing?

And thus ended the political career of Trump... Evangelicals can now discard him...

The use of historical evidence to determine constitutional rights