British and US naval forces freed an Italian ship from Somali pirates after hostages threw an SOS message in a bottle from a porthole, Italy's defence minister has said.

Ignazio La Russa said the 23 hostages had locked themselves in the strong room of the 56,000-tonne Montecristo.

The Royal Navy met no resistance on boarding it and detained 11 suspected pirates, UK defence officials said.
Click to expand... 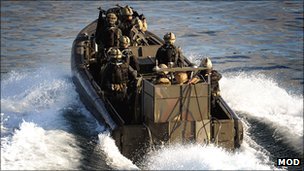 Royal Marines
You must log in or register to reply here.

Biden may be on the cusp of another historic achievement.