Joe T. May, the write-in candidate, is actually a Republican who used to serve in the Virginia House. Here is his bio:

He lost in the primary for HD-33 in 2013 to a Tea Party candidate, and so he is running for SD-33 as an independent. Notice the interesting combination of endorsements he is getting for his campaign: both from a conservative leaning group buy also from a form of the Green Party. He describes himself as a moderate. And btw, the guy is also an inventor with 20 patents in electrical and electronic engineering. So, the guy is also a creative guy.

I have no idea if this guy is making for a spoiler effect or not. [MENTION=45104]WelfareQueen[/MENTION] - can you add some information about him and the race?

The election follows on the heels of the one from 01/07, which is going into a recount.

The importance of these two elections is already explained here:

No predictions as to the outcome. Could be a big R or D win, or a tossup. No polling was taking of this SD that I know of. It went heavily for Obama in 2008 and 2012, but that doesn't say much in an off election, in the middle of winter. Wait and see.

I will be reporting the results later tonight.

The fate of the Virginia Senate hangs on these two seats: SD-06 (from the earlier thread) and SD-33. The Democrats must win both in order to achieve a tie in the Virginia State Senate, which would then be broken by Democratic Lt. Governor Northrup.

Special elections are always weird things - with a whole different dynamic. But these two relatively small races could have a big impact on Virginia state politics. 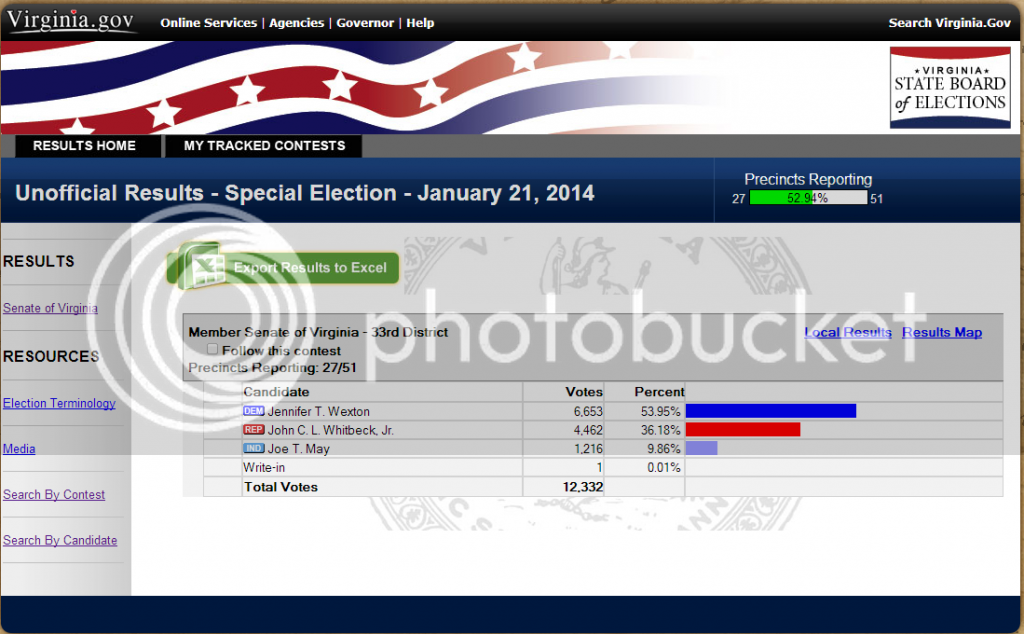 And it does look like Joe May is hurting the Republican candidate. 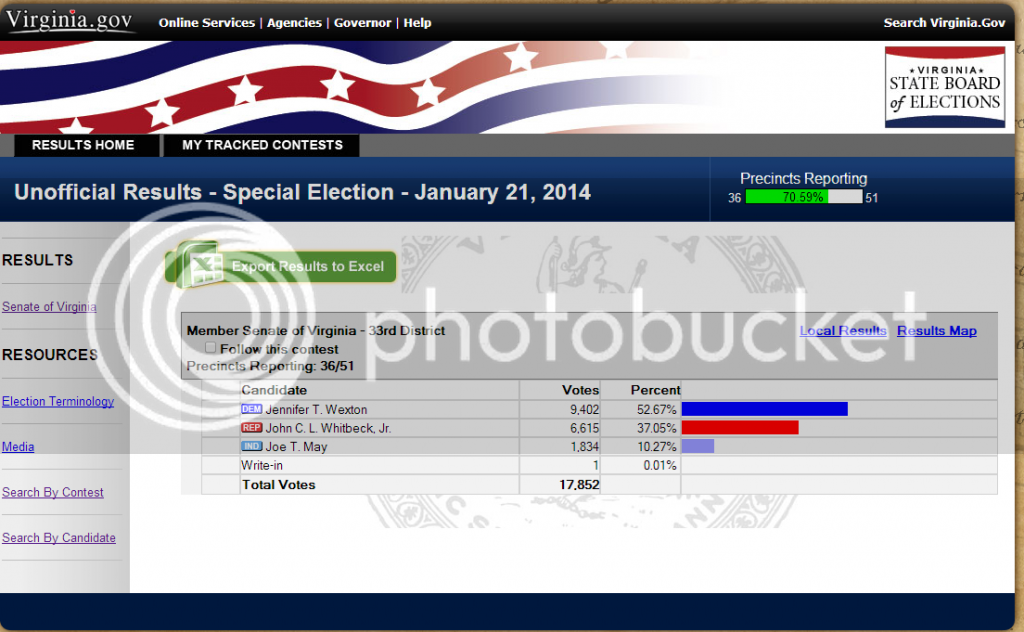 The checkmark should come any minute now. Whitbeck (R) would suddenly have to get more than 80% of the 30% of votes remaining in order to take the lead. Ain't gonna happen. The Democrats will pick-up this SD.

Control of the Virginia state senate now comes down to the recount of the special election from 2 weeks back, where Democrat Lynwood Lewis won by 9 votes out of 20,000 in the initial tally.

Control of the Virginia state senate now comes down to the recount of the special election from 2 weeks back, where Democrat Lynwood Lewis won by 9 votes out of 20,000 in the initial tally.
Click to expand...

Thanks for helping to keep this thread up to date. I had to get some sleep. 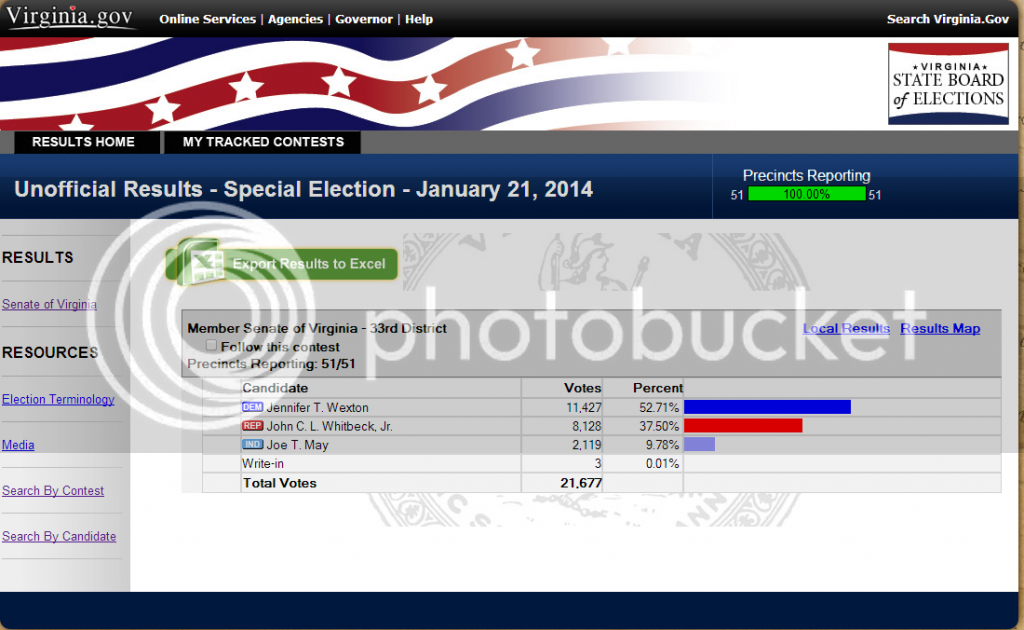 Usually, a couple of straggler ballots come in, so this may shift another 0.01 or so. No biggie.

It looks like May (I, but actually, R) really hurt the official (R) candidate. Don't know if this was an act of vengeance or not. As written in the OP, May, who was an incumbent state rep, got knocked off in the primaries by a Tea Party candidate and I just don't know if this was his way of getting back. It would also be a mistake to assume that all of the votes that went for him would have gone for Whitbeck, because May also got the endorsement of the Green Party in his area. It was an interesting mix of endorsements. Even so, the race would have been narrower, but apparently, very much advantage (D).

Now, I'm not trying to read too much into the tea-leaves here, but there are some points that I take away from this, maybe you guys will find it interesting:

Only around 21,000 votes were cast last night, just 1% of the total vote from the last Gubernatorial election and just 0.5% of the total votes from the last presidential election in this state, with a margin even smaller, but with big, big implications for state politics in Virginia, for if the DEM holds the seat in SD-06, then with a tied Senate and a DEM Lt. Governor as tie-breaker, this means the Terry McAliffe will be able to get through most of want he wants to accomplish, which in turn helps Hillary Clinton in 2016.

For me, the lesson of this is that everyones' votes DOES count. This small election could be a turning point in VA history. Lots of VA recounts have overturned elections, fair and square, so with only a 9 vote lead in SD-06, this is anything but settled. And if the R wins, then he wins. May the man with the most votes win. Fair and square.

BTW, in an analysis of VA that I did in 2009, following the historic 2008 presidential election,

Statistikhengst's ELECTORAL POLITICS - 2013 and beyond: Virginia - a county by county in-depth analysis

I stated in the conclusion, in Part III:

Conclusion:​
Obama's win in VIRGINIA differs greatly from his wins in both OHIO and INDIANA.

In INDIANA, every single county trended more or less democratic, without exception &#8211; there was a blue shift that moved the entire state and those overwhelmingly white, rural counties contributed greatly to Obama's narrow win here &#8211; yes, the counties that he still lost to McCain. This shows a large level of GOP defection to Obama in 2008. Here, Obama gained 405,028 raw votes over Kerry from 2004, while McCain lost 133,790 raw votes over Bush from 2004, an uneven shift. Indiana's PV growth rate over 2004 was 11.47%. And Obama won by +1.03%.

In OHIO, not every county trended democratic (11 counties trended GOP, 77 trended democratic), but there were no GOP county pick-ups. Also, in Ohio, the largest cities, all five of them, played the crucial role in moving the state into the democratic column and those overwhelmingly white, rural counties contributed very little to Obama's narrow win, in contrast to INDIANA. Surely there were some moderate GOP defections, but there was also a moderate amount of newly registered voters. Here, Obama gained 198,877 raw votes over Kerry's total from 2004, while McCain lost 181,948 raw votes over Bush's total from 2004, a moderate mirror image shift. Ohio's PV growth rate over 2004 was a nominal 1.36%, way under the national PV growth rate of 7.46%. And Obama won by +4.58%.

However, in VIRGINIA, there was real resistance to Obama, but in counties that are &#8222;emptying out&#8220;, so to speak. We see a large poli-demographic shift in VA, with the north and the SE gaining greatly in political strength for the Democratic party. Here there were obviously far fewer GOP defections, if at all (McCain scored more raw votes in VA than Bush from 2004), but far more newly registered and democratic dedicated voters. This poses a far larger problem for the GOP than either Indiana or Ohio, for Obama's +1.03% margin in Indiana can be overcome and Ohio is expected to be a battleground state is virtually every cycle, but the addition of more then 500,000 voters to the democratic rolls in just one cycle is much harder for the opposition to overcome. The best case scenario for the GOP is that Virginia becomes a bitter battleground state. However, +6.30% is hardly a battleground margin. It is a better margin that Obama scored in OHIO, FLORIDA, INDIANA and NORTH CAROLINA. It is a lean winning margin, but a comfortable one and will require a minimum 12.60% shift back in order for the GOP to regain the state, and I doubt that this shift will come from those 500,000 new voters. The worst case scenario for the GOP is that Obama cements Virginia into the democratic column in his first term, adding the state to core democratic territory and thus making the electoral math for the GOP more difficult.
Click to expand...

And now, 5 years later, the Old Dominion again went blue in 2012 and broke it's gubernatorial paradigm (for whichever reasons) and elected a DEM Governor with a county electoral map practically identical to the one for Obama in 2012, and now for the first time is a while, possibly a Democratic state Senate.

This tells me that Virginia really IS becoming a bellwether for the nation - the closely divided nature of the state does seem to reflect the nation at large quite well.

Most people did not believe the Obama team in 2008 when it set it's sights on Virginia, and then most thought he would lose it in 2012. The last Democratic President to have won Virginia twice: FDR. So, Obama surpasses expectations in this state not just once, but twice.

And if Hillary wins VA in 2016, then the last part of my analysis from 2009 would seem to be pretty much on the mark. Wait and see.

The recount of the first special election is done, and the Democrat increased her lead from 9 to 11. So it's official, the Democrats take control of the Virginia State Senate. Meaning all the crazy that comes from the Republican-dominated House of Delegates will die in the state senate.
OP

If HRC is the Dem 2016 candidate and wins VA, we are going to have a hard time in the GOP

We need a solid Christie like candidate in the campaign
OP

JakeStarkey said:
If HRC is the Dem 2016 candidate and wins VA, we are going to have a hard time in the GOP

I concur.
You must log in or register to reply here.

Can Anyone Stop Hillary?

Media forces for and against Hillary Rodham Clinton

Doesn’t it bother republicans Trump isn’t even talking about what he’ll do in his second term?
6 7 8