These Two Reports Hint At Who Will Win The Military Vote 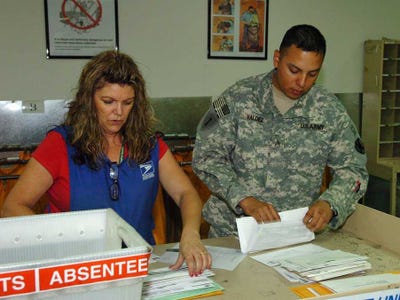 The military has failed to bubble up as a key topic in this years election, but that hasnt kept media outlets from trying to predict who the troops will vote for in this Novembers presidential election.

Military Times has come forth and declared that Republican presidential candidate Mitt Romney holds a 21 lead over President Obama in this Novembers election.

The Open Secrets blog by the Center for Responsible Politics has written about how military members have donated more money to Obama than Romneyeven donating more to one of Romneys former Republican opponents, Rand Paul.

The military has traditionally voted Republican for decades. Any polls showing the troops would vote otherwise come as a surprise.

Open Secrets did find that Obama received more campaign donations from troops than Romney$536,414 to $287,435. What was even more surprising was the type of support Paul received. The candidate who said he was opposed deploying U.S. forces to Afghanistan collected $399,274 from troops

Military Times issued an e-mail to its subscribers who are mostly made up of active duty, Guard and Reserve troops. The responses came from mostly NCOs and mid-grade officers. About 75 percent of the 3,100 responses they received came from troops in grades E-5 to E-8 or O-3 to O-5. The article didnt specify how many responses they received from troops E-4 and below, the grades that make up the majority of the military.

The e-mail poll also found out the respondents didnt rank national security high on their lists of what they cared about for the forthcoming election. Less than 16 percent said national security was their top concern in the race. And only 1 percent of respondents said the war in Afghanistan was their top concern. Comparatively, 66 percent said the economy is the top issue driving their vote.

Despite these reports by Military Times and Open Secrets, the way the military vote is leaning hasnt received much attention from the national media. That might have a lot to do with the fact the military is not being talked about in this election compared to the last two.

The candidates will have another chance Tuesday night to distinguish their national security priorities in the debate, although its not expected to be a popular topic outside the controversial events in Benghazi. Its clear from Military Times poll, the older troops dont even find the military topic pressing compared to the economy.

The military - favoring a Republican candidate?

E
"everything under control""