The Tribe by James Bruno 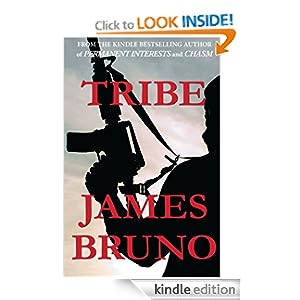 The Tribe by James Bruno

A novel of international intrigue and political maneuvering, this is something I highly recommend to all.

Harry Brennan, a mid-level CIA analyst and operative, becomes embroiled in a mission to wipe out the Taliban in Afghanistan From the onset, he senses something wrong, especially when he's told that headquarters has canceled the mission. To support a Mujahideen leader  and friend, Brennan goes ahead with the operation. After wiping out the Taliban camp, the Mujahideen warriors are counter-attacked and seriously decimated. Brenna has no doubt that someone at the highest levels of the US government has betrayed the Afghan fighters.

Harry Brennan is, without a doubt, the equal of Tom Clancey's Jack Ryan, David Baldacci's Oliver Stone, and Clive Cussler's Dirk Pitt. He is, at first, thrown to the CIA wolves, finds himself then moved to a high-level Top Secret group, meets a society firefly who introduces him to the highest levels of government and the private community, especially executives of oil companies seeking to gain access to unlimited oil in the stan nations now free of Russian domination.

As a writer, I find myself jealous of Mister Bruno's skills as a story teller. He has sucked me into the sights, sounds and touch of the novel. His use of words goes beyond the limits of just telling a story  he shows it to us! Here is just one small sample of his work:


Washington between November and March is simply rotten. Damp cold seals the city like a sarcophagus. Advancing winter makes its bitter presence felt by wreaking ice and snow squalls on a city JFK described as combining southern efficient and northern charm. Snow removal isn't contained in the local DNA. The self-absorbed citizens barrel down the metropolis's unplowed thoroughfares like kamikaze pilots. Leaving the office nights at nine therefore, doesn't irk me so much in this dismal time of the year. The days stink and I shiver, not of cold, but at the mere thought of the demolition derby rush-hour in a vast urban skating rink.

The Tribe can be found @ [ame=http://www.amazon.com/gp/reader/B005D3G1MU/ref=sib_dp_kd#reader-link]Amazon.com: Tribe eBook: James Bruno: Kindle Store[/ame]
and is available in Kindle Edition and Paperback.

I easily give The Tribe a five-star review and highly recommend it to anyone interested in the inner workings of the intelligence community and wish to learn more about the highly complicated social structures of Afghanistan and Pakistan. It will also open your eyes as to how politicians and bureaucrats design our foreign policy with far more than national interests in mind.

Is Kabul, Afghanistan America’s Dien Bien Phu? — With Report from Sources on the Ground in Afghanistan

The FBI's Role in the Jan. 6 Capitol Fracas Is Absolutely Disgusting
5 6 7

The REAL reason Dimwingers are conducting this "impeachment" farce.
2

Do you think Russia attacked our democracy to steal the 2016 election in favor of Trump?
2 3

How about another stimulus check to fix the problems Biden created?
8 9 10

J
We're Not Ready To Say Goodbye To War Just Yet.