She sleeps, dreaming of her past, longing for the ones she once knew and loved. A voice begins to resonate in her mind, that of her father from eons past:

He was preparing to head out into battle for his clan, the Bree. Sounds of clashing metal and death screams echoed in the distance.

"You are the will of the gods. Bearers of the inextinguishable flame."

The two young girls looked up curiously at their giant of a father as he reached for his weapons and armor.

"Your sister, Soldurae is a keeper also, but she bears the essence of the inescapable darkness. You two have been endowed with immortality by Titanomachia, the god of longevity and war, creator of this universe. Your lives will continue long after time itself ends."

He sighed, the air of the room taking on a more serious tone.

"You will not die, at least not in the same way as the other lesser creatures of this world do. Each time you fall in battle, the spirit of Titanomachia will breathe life back into your broken bodies. Titanomachia is the keeper of the giant's essence, yet her essence also resides in all of us, to varying extents."

He began strapping on his armor.

"You two are the first to be blessed with her spirit since your mother before you. She ensured your blessing by sacrificing her immortal soul to Titanomachia. But beware that with every blessing comes a curse. Even as you are blessed with life everlasting, you will be cursed to wander this land and the great lands beyond for all eternity, never knowing solitude for as long as this world lives. You will watch as those you care for most wither away of old age and perish."

He heaved a pair of enormous axes onto his back and began walking out of the hut.

"I must fight for the sake of our people. If I do not return, take it as a sign of her will and the beginning of your endless journey. Fear not, as long as she keeps my essence, I will watch over you, my little stars.”

The girls began whimpering as he started for the door.

"Maybe, in a great time beyond, you will find the one who reminds you of me." He looked upon them longingly, his eyes welling with tears. "Never forget, my heart forever belongs to you as it does to your mother. Never let what you see around you blacken your hearts to love".

Sendura began running toward him with an outstretched hand, only to be stopped by her sister. “No! You mustn’t!---” She turned back around only to see the fear and sadness on Soldurae’s face. Soldurae knew the time had come to say goodbye to father, forever, just as the elders had prophesied.

“LET ME GO!” She insisted angrily

Even as he wept, seeing his firstborn daughter struggle so, he smiled and looked up toward the ominous dark sky with lightning flashing keenly from horizon to horizon. “My beloved, I will be joining you soon to guide our children along the eternal path.”

Suddenly, an attacker blasted through the wooden door, toward him, but father slew him in one swift motion.

With that sudden burst of violence, the father turned back toward them one last time with his gleaming white eyes and then slowly disappeared into the thick of battle; never to be seen again in that age, leaving the two girls to begin their seemingly endless journey.

Soldurae couldn’t let her go. To interfere with his mission was to defy the will of Titanomachia herself. Soldurae felt her grip steadily loosening amid the mighty struggles of her sister. In an act of mercy, Soldurae struck her elder sister to the floor. Before passing out, Sendura looked up only to see her sister sitting next to her with her face buried in her bent knees, silently crying. She reached out weakly for her father, who was quickly disappearing into the distance.

Her vision slowly faded to black as she fainted. The last sight was of her outstretched hand.

With a sudden flash of lightning and booming thunder, Sendura stirred awake, sitting up with tears flowing down her cheeks. Her heart was pounding. She sat there on her bed, looking around anxiously in the darkness for her sister who was sleeping in the bed the next to her. As if sensing her sister's fear and sadness, Soldurae beckoned: "I am here! Right here!"

Sendura caught sight of her sister walking towards her in the faint moonlight, then letting out a sigh of relief.

"I miss them too, elder sister. Father said our watch will be eternal. Even so, I will be here to ease the sadness for both of us."

Sendura smiled and brushed her hand through her sister's white hair. “Will you let me go this time?” Sendura asked somewhat jokingly.

Soldurae didn’t answer. She only smiled and wiped the tears from her sister's face and went back to her bed. Sendura laid back down in hers, sleep once again returning to her eyes. She carried off to sleep, to dream of a happier future.
Last edited: Apr 27, 2020
OP

Source document is here, if you want to read it. 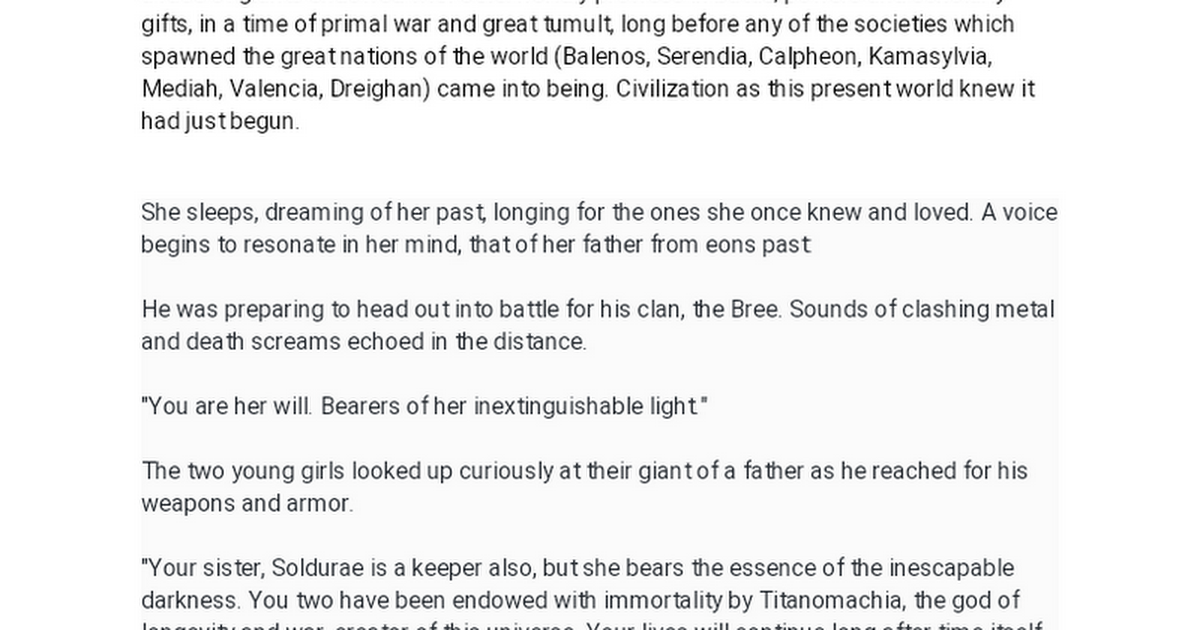 docs.google.com
You must log in or register to reply here.

Nucleus of my Nerves

3 minutes ago
Parker99
P
W
President Trump: I have directed @stevenmnuchin1 to get ready to send direct payments ($3,400 for family of four) to all Americans.
2 3 4