Muscovy rapidly (Nigeria in snow) is falling to its place , somewhere between Nigeria, P-stan and Zimbabwe...

Russia lost its top ranking in the 2014 Sochi Winter Olympics when it was stripped of two more gold medals in the doping scandal that's engulfed the ... The decision to strip the athletes of their medals and deprive Russia of its first place in the table represents a “destruction of the Olympic movement and the ..
Click to expand... 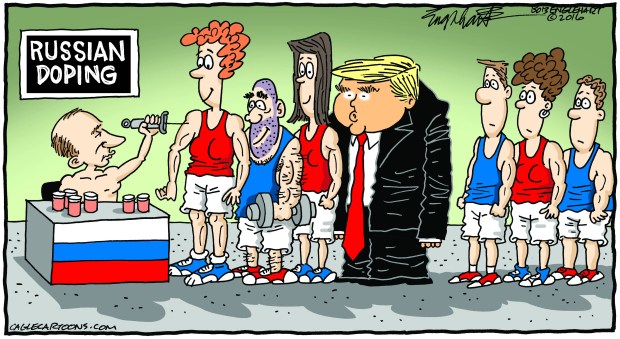 Russian sportsmen gave their samples to the Swiss lab 3 weeks after Sochi Olympics (almost 4 years ago!) and since then din't have any access to them. If somebody has been scratching them or biting them it definitely were not Russians.

What we are witnessing now is eliminating whole bunch of strong opponents a few months before the next Olympics based on some talks and suggestions, nobody has even seen any evidence. It's an unprecedented and it's demonstrating IOC being very dependent on sponsor's money (like NBC) in its decisions.

In the end, the Sochi Winter Olympics 2014 was no Vancouver 2010 for NBC ratingswise — but it also wasn’t Nagano 1998 or Torino 2006. In fact, the 2014 Sochi Games are the lowest-rated primetime Olympics in the adults 18-49 demographic ever.
NBC Hits Lowest Olympics Demo Rating Ever With Sochi Coverage

Also:
President of the World Anti-Doping Agency (WADA) Craig Reedie has said that the organization still having no sufficient evidence a state-sponsored doping system in Russia ever existed


https://www.wada-ama.org/sites/defa...s/wada_independent_commission_report_1_en.pdf
You must log in or register to reply here.

How many Europeans pay for Muslim inbreeding?

Another Asian Attacked By A African (video)

When Will FBI/DOJ Start Using Photos To Bring Violent Antifa/BLM Terrorists To Justice As They Are Doing With Capitol Rioters?

Hypocrisy and Politicization of our Media