Many injured (over a hundred). News at Fox says 54 dead.

(Editorial note: but but but we shouldn't refer to the enemy as Islamic terrorists.)
W

Boko Haram Violence Increasing Hunger, Malnutrition in Region
September 10, 2015 — The World Food Program (WFP) says it is scaling up aid for hundreds of thousands of hungry people, many severely malnourished, who have fled to Chad, Niger and Cameroon to escape attacks by Boko Haram militants in northeastern Nigeria.

According to the WFP, nearly three quarters of a million people in countries bordering Nigeria are facing a worsening food crisis linked to increased violence by Boko Haram militants. WFP spokeswoman Bettina Luescher told VOA that recent attacks have led to a sudden surge of internally displaced people and refugees. “We are quite concerned about people [who] are really afraid of Boko Haram. They are telling harrowing stories about fleeing from the violence, being on the run, sometimes traveling for several days and we have to make sure that especially the children and moms are being taken care of,” Luescher said.

The WFP says it plans to increase food aid to more than 650,000 vulnerable people in Chad, Niger and Cameroon. The agency warns the security crisis playing out in the region could lead to prolonged hunger. Impacts from this emergency already are visible. The WFP reports a dramatic rise in malnutrition among children under five and women in the areas affected by Boko Haram violence. It says acute malnutrition rates in some areas of Chad have passed the World Health Organization’s emergency threshold of 22.5 percent. 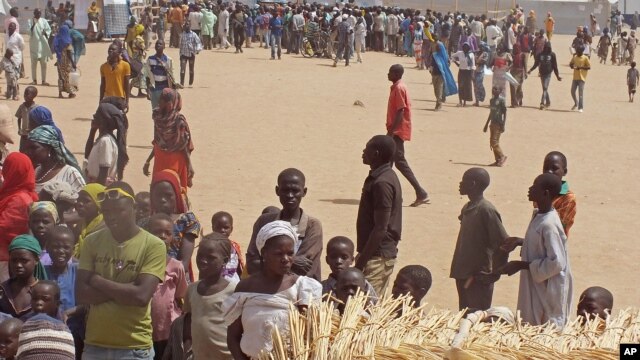 People who fled their homes due to violence from the Islamic extremists group Boko Haram are seen inside a refugee camp in Minawao, Cameroon

In addition, WFP spokeswoman Luescher said peoples’ livelihoods in the countries of refuge are being severely disrupted. “Closed borders have disrupted trade. They have halted access to farmland, prevented herders from reaching grazing land. Fishing, which is a really important part for living for many people in Chad, is banned for security reasons. In Chad, rural households in affected areas sold more livestock than in a normal year, meaning they are trying to get some money in order to buy food,” she said.

Luescher added that people are resorting to extreme measures to survive. She said one in three households reportedly are falling into debt and selling whatever they have to obtain food. She said the WFP is appealing for $16.3 million to respond to the emergency.

Luckily....as Guno says....white America is dying off. America's future will be like this....and ISIS and Mexican drug gangs. Guno says it's gonna be SO MUCH better!!
W

Boko Haram - the next major terrorist threat to our national security?

Boko Haram: A Growing Threat in West Africa
October 17, 2015 | WASHINGTON — Eighteen months ago the world awoke to the kind of news that gives every parent nightmares: almost 300 young girls had been kidnapped from a school in the town of Chibok in Borno State, Nigeria.

Responsibility for the kidnappings was claimed by Boko Haram, an Islamic jihadist and terrorist organization based in northeast Nigeria. As most of those girls still remain missing, we take a look at the group responsible.

What is Boko Haram?

Boko Haram is an Islamist extremist group responsible for dozens of massacres of civilians and the abduction of more than 500 women and girls in its five-year insurgency in Nigeria. Boko Haram promotes its own version of Islam which makes it "haram," or forbidden, for Muslims to take part in any political or social activity associated with Western society. The group's formal name is Jama'atu Ahlis Sunna Lidda'awati wal-Jihad, which in Arabic means "People Committed to the Propagation of the Prophet's Teachings and Jihad." But residents in the northeastern Nigerian city of Maiduguri, where the group originated, dubbed it Boko Haram. Loosely translated from the region's Hausa language, this means "Western education is forbidden." 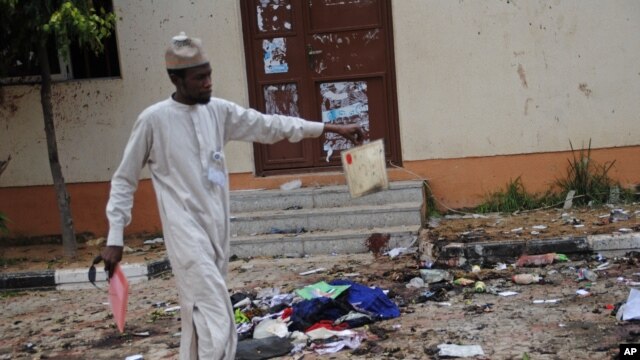 A man picks up an item belonging to a student at the site of a bomb blast in the university town of Zaria, Nigeria​
The history

A charismatic cleric named Mohammed Yusuf founded the group in Maiduguri in 2002. He set up a religious complex, which included a mosque and an Islamic school, as an alternative to the government schools he regarded as both alien to Muslims and tools of the elite. But Boko Haram was not only interested in education. Its political goal was to create an Islamic state, and the school became a recruiting ground for jihadis. Nigerian government forces struck back with a vengeance in 2009, capturing Yusuf, interrogating him and then shooting him without trial. His body was shown on state television and the security forces declared Boko Haram finished.

US sends drones and troops to fight Boko Haram in Cameroon
Thursday 15th October, 2015: WASHINGTON - About 90 American military personnel have been deployed to Cameroon with plans to send more troops along with surveillance drones to gather intelligence on the Boko Haram and support counterinsurgency efforts against the Islamist militant group in West African country.

According to military and administration officials, President Barack Obama in a notification to Congress has said an advance force of about 90 military personnel began deploying to Cameroon Monday, with the consent of the Yaounde government. The Boko Haram has been flushed from its Nigerian base by that country's armed forces but is now threatening neighboring countries like Cameroon. The Defense Department plans to send the troops to Cameroon on what is expected to be a temporary mission. 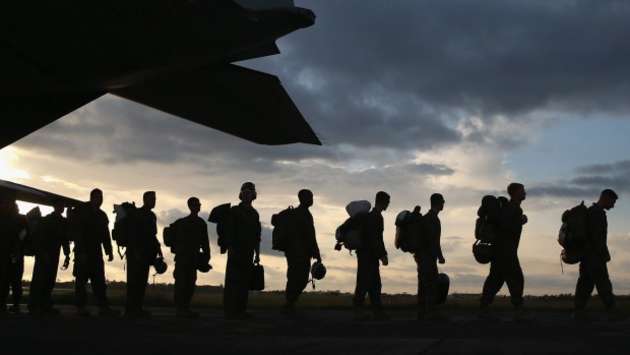 The troops were sent ahead of the arrival of additional deployment "to conduct airborne intelligence, surveillance, and reconnaissance operations in the region". "The total number of US military personnel to be deployed to Cameroon is anticipated to be up to approximately 300," Obama said. "These forces are equipped with weapons for the purpose of providing their own force protection and security, and they will remain in Cameroon until their support is no longer needed." A defense department statement said the personnel had been deployed at the invitation of the Cameroon government. "The results of these (intelligence, surveillance, and reconnaissance) ISR flights will better enable African partners to secure their borders against violent and illegal activities disrupting our common desire for stability in the region," the statement said. "Most importantly, all information collected by US' unarmed, remotely-piloted aircraft is used to support international counter-violent extremist organisation operations."

The US military has about 7,000 troops in Africa, with many at its base in Djibouti. US Africa Command, which is based in Stuttgart, Germany, has small contingents of forces conducting temporary training missions around Africa. Boko Haram leaders have pledged allegiance to the Islamic State as both groups are fighting to establish an Islamic caliphate across the Middle East and Muslim lands in Africa. The militant group has been waging a vicious insurgency for several years that originated in Nigeria but has since spread into neighbouring Cameroon, Chad and Niger and left an estimated 20,000 people dead.

US sends drones and troops to fight Boko Haram in Cameroon
Click to expand...

Boko Haram crisis: 'Huge rise' in child suicide bombers
Tue, 12 Apr 2016 - Boko Haram's use of child bombers has increased over the last year with one in five suicide attacks now carried out by children, the UN says.

Boko Haram's use of child bombers has increased over the last year with one in five suicide attacks now done by children, the UN's child agency says. Girls, who are often drugged, were behind three-quarters of such attacks committed by the militant Islamist group in Cameroon, Nigeria and Chad. It is an 11-fold increase with four attacks in 2014 compared to 44 the next year, including January 2016. The change in tactics reflects the loss of territory in Nigeria by the group. 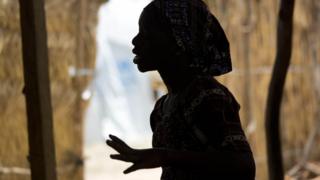 The seven-year insurgency, which has mainly affected north-eastern Nigeria as well as its neighbours around Lake Chad, has left some 17,000 people dead. Unicef says up to 1.3 million children have been forced from their homes across four countries: Cameroon, Chad, Nigeria and Niger. The UN report has been released as Nigeria approaches the second anniversary of the kidnapping by Boko Haram of more than 200 girls from their boarding school in the Nigerian town of Chibok.

Their abduction sparked the global campaign Bring Back Our Girls, but none of the girls have yet been found. The report, Beyond Chibok, says that boys abducted and recruited into Boko Haram's ranks are forced to attack their own families to demonstrate their loyalty. Girls are exposed to severe abuse including sexual violence and forced marriage to fighters.

A 17-year-old girl who was abducted and is living with her baby in a camp in the Nigerian city of Maiduguri told Unicef that she refused to marry despite death threats. "Then they came for me at night. They kept me locked in a house for over a month and told me: 'Whether you like it or not, we have already married you.'" She says she has often been ostracised since her escape by other women who accuse her of being a "Boko Haram wife".

Back in my day, i wanted to be a Doctor, Fireman, Policeman, someone who really cared for other people. Today, people want to be like George Floyd.
2 3

The Best SPAC ever?

1 minute ago
The Banker