Plane diverts because of claustrophobia?

UK-US flight in emergency divert
Sniffer dog at Boston airport
Security checked every piece of luggage from the flight
A London to Washington flight diverted to Boston with a fighter escort after the pilot declared an emergency following a disturbance on board.

A woman passenger on the United Airlines flight is said to have been involved in a confrontation with crew.

But reports that she was carrying items including a screwdriver, Vaseline, matches and a note referring to al-Qaeda have been denied.

Passengers and crew have all now disembarked from the plane safely.

Police took control of the plane after it landed, and security officials checked every item of luggage from the plane with sniffer dogs.

United Flight 923 from Heathrow Airport, with 182 passengers on board, was originally bound for Washington Dulles.

"There was an altercation with at least one female passenger," a United Airlines spokeswoman said.

Nenette Day, a spokeswoman for the Federal Bureau of Investigation in Boston, said the 60-year-old woman was apparently claustrophobic and had become disruptive on the flight.

"This isn't just an 'I want another drink kind of thing,' it was a disruption that caused them to divert the plane," she said.

"There are no known links to terrorism regarding this event at this time," Christopher White, a Transportation Security Administration spokesman said.

OK here's the problem. There are too many idiots flying. This is because air travel is a business and that business wants to sell as many tickets as possible to as many idiots as possible. It's a bad business evidently because they are constantly going bankrupt. Generally I am a free market person, but if we are going to be constantly propagandized that travel is a national security issue then the airlines should be nationalized and there should be no profit motive. We should make agreements with the other nations to do the same. Sell tickets to people who need to travel and don't entice fools like this claustrophobist to fly with cheap tickets and specials. With the high volume of air travel the boneheads at TSA can't possibly do a good job. If we actively discourage air travel among the riff raff and reduce the volume of air travel to manageable levels we'll be much safer and travel may actually become pleasurable or tolerable again. That combined with positive and negative profiling should solve most of the problems.
"Pork-good for you, bad for Muslims and Jews!"

This woman was a fruitcake, no doubt about it, regardless of ideology. But that's not all she was: a longtime 1960s "peace activist", an extreme-leftist with a "love for Howard Dean", a writer of anti-American screeds for the foreign press, a believer in all the usual liberal rantings (Bush didn't win the 2000 election, he's forbidding certain songs, etc.). No wonder the airlines didn't spot her as a nutcase during screening: she blended in so well with many other Democrats.

Why is it that people who want tax cuts, smaller government, and the defeat of terrorists, never disrupt airline flights?

It was March 2003, the eve of the US invasion of Iraq, and into the office of dumbfounded Pakistani newspaper editor Najam Sethi walked an articulate, fresh-faced Vermont woman, saying she wanted to vent her anger at America in his pages.

Violence-plagued Lahore teemed with anti-American sentiment, yet Catherine C. Mayo seemed to move about with ease, Sethi recalled. And writing for the Daily Times of Pakistan, Mayo told about her 1960s activism. About her love of Cat Stevens and Howard Dean. About the mountains and lakes of her native Vermont. And about her shame and anger at America. 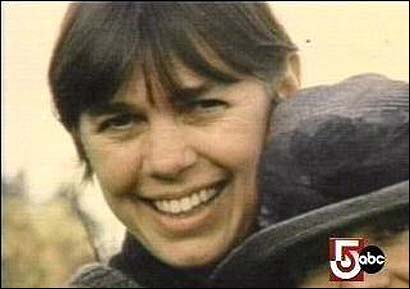 Catherine T. Mayo, in an undated image provided by WCVB-TV (Channel 5), had traveled often to Pakistan, her family said.

In an open letter to her granddaughters published on June 24, 2003, Mayo wrote: "Governments in the world right now have made terrible decisions and have caused a lot of fear and bloodshed. But remember, girls, the world is beautiful, and it is yours."

She wrote for the newspaper until July. "Then she just disappeared," Sethi said.

Mayo, 59, of Braintree, Vt., was arrested Wednesday aboard a Washington, D.C.-bound flight that was diverted to Logan International Airport after she made suspicious remarks, startled passengers and crew with her behavior, and resisted efforts to calm her. It was the first major air scare since British authorities broke up a terrorist plot last week, triggering a tightening of flight security worldwide.

Mayo was charged yesterday with intimidating flight crew members and interfering with the crew, a federal felony punishable by up to 20 years in prison.


(Full text of the articles can be read at the above URLs)
The Constitution isn't perfect, but it's better than the system we're using now.

It's interesting that she did have the materials reported when first being reported, then later said to be not so. I swear, there is more misinformation coming from the government regarding these problems, then even from the MSM, which is saying a hell of a lot! :nine:

Kathianne said:
It's interesting that she did have the materials reported when first being reported, then later said to be not so. I swear, there is more misinformation coming from the government regarding these problems, then even from the MSM, which is saying a hell of a lot! :nine:
Click to expand...

Proving the point above:

A Vermont woman whose bizarre behavior forced a Washington, D.C.-bound plan to make a dramatic landing in Boston yesterday was thought to be a diversion for a possible terrorist attack, according to an FBI affidavit released today.

One of two male passengers - either a U.S. air marshal and a correction officer - whose help was solicited by the flight crew had become concerned that she might be acting as a diversion for a possible terrorist action, according to the affidavit...

...Officials have determined that Mayo has no terrorist ties...
Click to expand...

Handicapped by our values?

"The US and Israel Stand Alone"

So Much For Getting Back To Normal: Unfriendly skies: 2,500 unruly U.S. airline passengers reported in 2021
2

J
Can The World Stop Mass Starvation in Ukraine?
2 3 4

Democrat's Human-Trafficking Operation Similar To A Travel Agency....Giving Lavish Gifts To Those Who Enter Illegally

A moment ago
struth
S
M
Why is Biden's cabinet members predominantly Jewish?
6 7 8