Philippines' Duterte says he is against 2014 defense pact with US

MANILA - Philippine President Rodrigo Duterte said on Friday that he is against the implementation of the Enhanced Defense Cooperation Agreement (EDCA) that Manila and Washington signed in 2014, hinting again that he might just scrap the agreement that allows prolonged deployment of American forces in the country as well as build logistics hub in Philippine military bases.

Duterte, who arrived early Friday back in Davao City from an overnight official visit to Malaysia, told a news conference that he does not want to see any foreign troops on Philippine soil.

He added that the joint military activities that will be carried out this year by the Philippine and U.S. troops would probably be the last.
In fact, he said that he only gave the go-ahead for the EDCA activities to push through this year because they were already firmed up by Defense Secretary Delfin Lorenzana.

The on and off relationship continues.
W

Duterte impeachment motion would be a numbers game...

Philippine President Rodrigo Duterte risks impeachment after he admitted “personally” killing criminals when he was the mayor of Davao, two Philippine senators said. The firebrand leader boasted to business leaders on Monday that as Davao mayor he used to prowl the streets on a big motorcycle looking for “an encounter to kill” just to show to local law enforcers he can do it. “I used to do it personally,” Duterte said. “If I can do it, why can’t you?” More than 2,000 people have been killed in police anti-drug operations since Duterte became president in July. Almost all were shot when they resisted arrest.

Another 3,000 deaths are under investigation, with critics calling them vigilante killings. Senator Leila de Lima, a staunch critic of Duterte, said the president’s admission could be a ground for impeachment. “That is betrayal of public trust and that constitutes high crimes because mass murders certainly fall into the category of high crimes. And high crimes is a ground for impeachment under the constitution,” de Lima told CNN yesterday. Philippine Senator Richard Gordon, who heads the nation’s Senate Justice Committee, also said Duterte opened himself to possible impeachment proceedings following his controversial comments. “When he says that, he’s opening himself up, so what’s the legal way, then go ahead and impeach him,” he told reporters, adding he was not surprised by the statement. 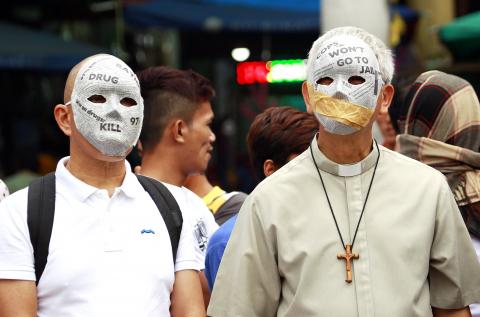 Father Robert Reyes, left, and Manila Auxiliary Bishop Broderick Pabillo wear masks with slogans as they join a protest against alleged extra-judicial killings in Manila​
Duterte’s allies in the Philippine Congress dared the president’s opponents and critics to file an impeachment motion, saying removing the leader through a political process is a numbers game. There are less than 50 opposition lawmakers in the 293-member lower house of Congress. A two-thirds vote is needed to impeach a president. Peter Wallace, who organized the business forum where Duterte spoke, thought the president’s statement was his “usual bravado.” “He talked as he often does about drugs, and killings and criminality. And we had expected that he would, but we were there not to listen to that,” Wallace told Reuters by telephone. “We were there to talk to him or listen to him about business issues and I was pleased that... he moved on to those subjects.”

Philippine Secretary of Justice Vitaliano Aguirre II dismissed Duterte’s statement as an exaggeration. “It’s like a hyperbole, that’s the president, he is used to exaggerate just to put his message across,” Aguirre was quoted in radio reports as saying yesterday. Even if that were true, Aquirre said it did not necessarily mean that he violated the law. “It could be done with a justifiable cause and justified circumstances as a public officer in order to arrest but if they resisted,” Aquirre said, referring to Duterte.

Duterte made the comment in a speech Tuesday evening during an oath-taking ceremony for armed forces of the Philippines officers in Manila. He said China could patrol international waters similarly to how they did off the coast of Somalia, referring to Chinese ships protecting trade routes from pirates as part of an international effort.

"By the way, I also asked China, if they can patrol the international waters without necessarily intruding into the territorial waters of countries. We would be glad to have their presence there," Duterte said. "Just to patrol like what they did in Somalia." 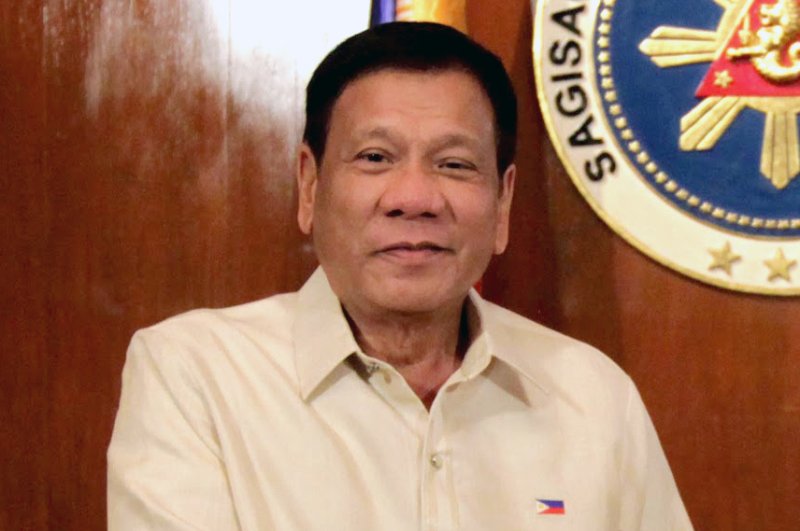 Philippine President Rodrigo Duterte on Tuesday said he asked China if it could patrol international waters without encroaching into the territorial waters of other countries. He said he would be "glad" if China could help secure waters from the threats of terrorism and piracy.​
Duterte said China could help protect trade routes in Southeast Asia from the threat of terrorism and piracy, particularly in the Malacca Strait and the Sulu Sea. He said if trade routes become more dangerous or are blocked, international trade routes could shift, becoming more expensive, and companies could pay higher insurance rates -- meaning consumers would pay higher prices for goods and services.

On Sunday, Duterte said he ordered the National Police to suspend the country's war on drugs and to "cleanse" itself from corruption. Duterte's speech is available to view online.

"It is high time that President Duterte is punished for his sins against the country," Rep. Gary Alejano said. "We are of the firm belief that he is unfit to hold the highest office of the land and that impeachment is the legal and constitutional remedy to this situation." It is unlikely the impeachment process will proceed since Duterte's PDP-Laban Party has an overwhelming majority in the House of Representatives -- two-thirds of the legislature must vote in favor of impeachment, and 260 of the 292 seats in the House are allied with Duterte. But it could be a factor in bringing charges against Duterte in the International Criminal Court. 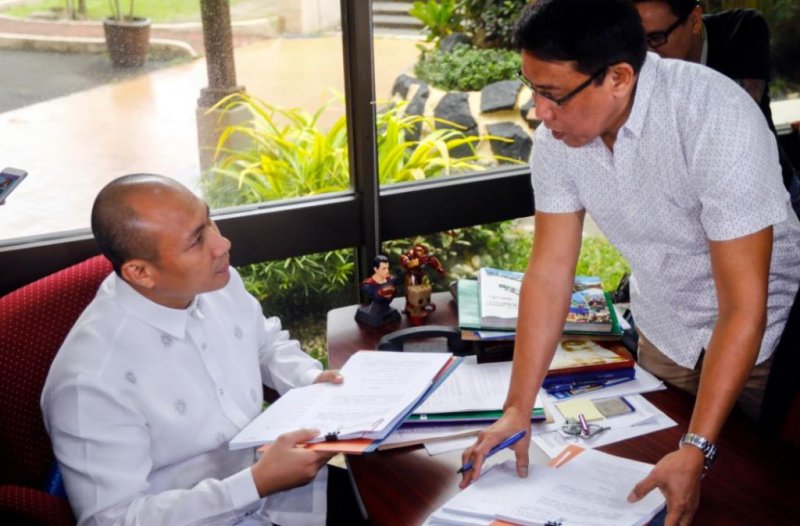 Philippines Rep. Gary Alejano, left, prepares impeachment documents, submitted Thursday, against President Rodrigo Duterte. Because Duterte allies hold an overwhelming majority in the House of Representatives, the impeachment process is not expected to proceed, but Alejano's complaint charges Duterte with murder, crimes against humanity and corruption​
Alejano's complaint accuses Duterte of murder in connection with the extrajudicial deaths of thousands of drug dealers and drug users killed by police and vigilante forces since Duterte assumed office in 2016. Duterte has drawn the criticism of global human rights groups who say his encouragement of the killings could be regarded as crimes against humanity. Two people have also testified that Duterte led a "death squad" against enemies while mayor of Davao City.

The impeachment complaint also states that, as Davao City mayor, Duterte collected salaries of fictitious government employees and has up to $40 million in secret bank accounts. The 17-page complaint includes 10 pages of accusations against Duterte, and refers to the unexplained and undeclared wealth of Duterte and his children, Davao City Mayor Sara Duterte-Carpio and Vice Mayor Paolo Duterte. House Speaker Pantaleon Alvarez, a Duterte ally, dismissed the complaint in a television interview, saying, "Simply put, this is stupidity, period." He added the House will process the complaint but nothing will come of it.

No gun were found among the protestors at the Capitol on Jan. 6......testimony from FBI states under oath.
8 9 10

If you don’t like it start your own platforms

What do Trump supporters feel about the 1.9 trillion stimulus bill
4 5 6

Capitol Insurrectionist Suspect Flees to Kenya, Is Deported Back to America to Face Justice