Officers confronted the man, identified by police as 18-year-old Alhaji Sow, in a campus building "armed with an edged weapon," the department said.

Sow "lunged" at a police officer with his weapon during the confrontation, and the officer and a school security officer both fired their weapons, striking him, according to Melbourne police.
Click to expand...

You all know the stories of the other two, both quite despicable, but this narrative of "White" terrorism instead of all acts of violence should be terrorism, is just as despicable by the Lame Stream Media, for not being fair and balanced. Of course some of the talking heads on the "FIVE" says it is the Democrats who have caused all this, because they cant say a black man murdered children with his car, or a Muslim with a knife stabbed other kids at a college, because then they would be deemed racists.


WELCOME TO JOE BIDEN'S AMERICA....arent you glad you voted for him? Dumbass. 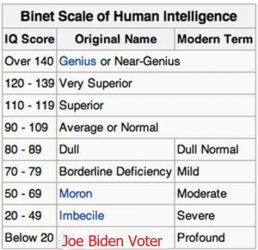 I read your post but I don't know what you're trying to say.

You don't like blacks?
.
Mods told me to stop pointing out fake news.

Otis Mayfield said:
I read your post but I don't know what you're trying to say.

He saying that he doesn't like race-baiters like you.
I have a simple policy: you rise from the dead via your own steam, what you say goes.

Society cannot exist, unless a controlling power upon will and appetite be placed somewhere; and the less of it there is within, the more there must be without. It is ordained in the eternal constitution of things, that men of intemperate minds cannot be free. Their passions forge their fetters. —Edmond Burke, Letter to a Member of the National Assembly, 1791
You must log in or register to reply here.

Brandon feels the pain of the Waukesha SUV driver

“I’m begging you. You’re a black man” – Bodycam Footage Reveals Man Armed With A Knife Killed By An Officer Was Asked 47 Times To Drop His Weapon
2 3 4

Armed Utah Teacher...you know, with a gun, stops man from kidnapping student, and trying to force way into building...

Law banning hand gun sales to people under the age of 21 is unConstitutional. Good decision, women are safer now.
2 3 4

Robert Kagan: Trump will run in 2024 and send America to 'its greatest constitutional crisis since the Civil War'
17 18 19

Is Germany blocking Ukraine from defending itself against Moscow barbarism ?