"And they shall fall by the edge of the sword, and shall be led away captive into all nations: and Jerusalem shall be trodden down of the Gentiles, until the times of the Gentiles be fulfilled." Luke 21:24 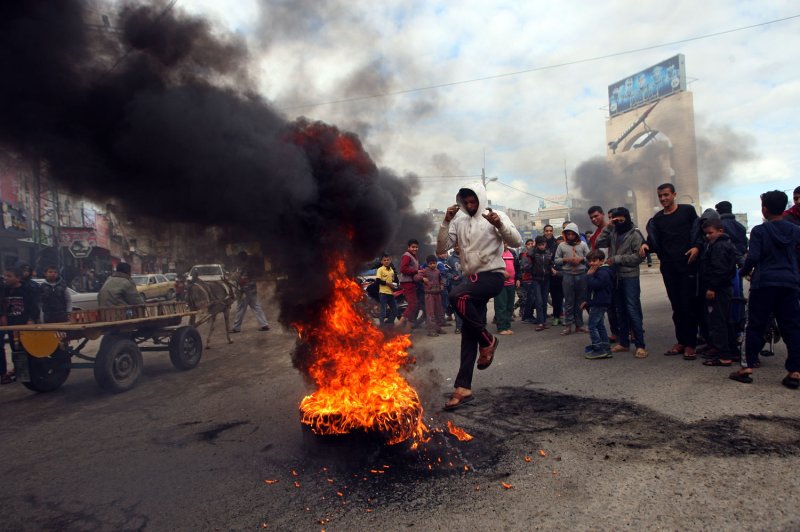 Palestinians burn tires in Khan Younis in the southern Gaza Strip Friday during a protest against U.S. President Donald Trump's decision to recognize Jerusalem as the capital of Israel.​
Protests also ensued across the Muslim world, as demonstrations were planned in Iraq, Egypt and Turkey. Iranian prayer leader Ayatollah Khatami called for mass protests over Trump's move, which some analysts say now makes the Israeli-Palestinian conflict more difficult. "He proved that the cure for the issue of Palestine is only, only, an intifada," Khatami said. "Only intifadas can turn day into a dark night for the Zionist regime." At the U.S. Embassy in Indonesia, hundreds of protesters waved Palestinian flags and chanted "Allahu Akbar" or "God is greatest." In Malaysia, protesters burned Trump in effigy. 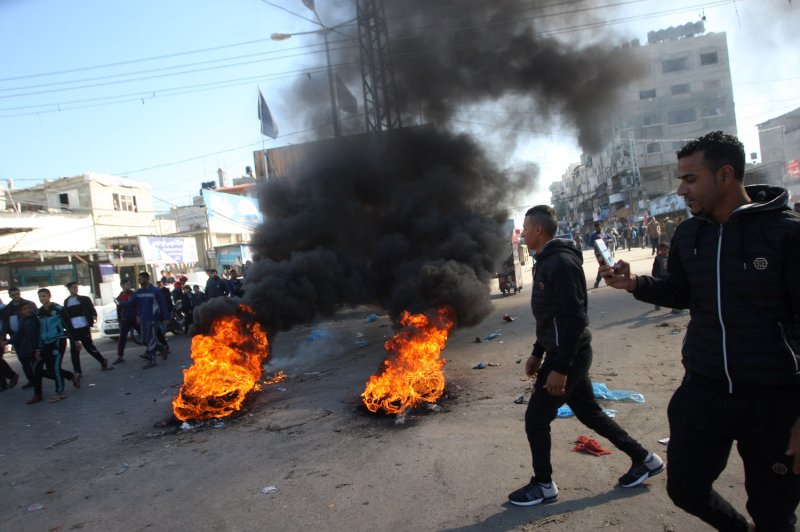 Palestinians burn tires in Khan Younis in the southern Gaza Strip Friday during a protest against U.S. President Donald Trump's decision to recognize Jerusalem as the capital of Israel.​
The worldwide protests were sparked by Trump's announcement Wednesday that the United States would move its embassy from Tel Aviv to Jerusalem and recognize the latter as the capital of Israel. Previous U.S. presidents have refused to take that step -- believing Jerusalem's status should be negotiated between Israelis and Palestinians. French Foreign Minister Jean-Yves Le Drian said the move may prevent the United States from mediating future Palestinian-Israeli peace talks -- something it's done for decades. "Until now, it could have had a mediation role in this conflict, but it has excluded itself a little," Le Drian said. "The reality is they are alone and isolated on this issue."

tyroneweaver said:
Times of the gentiles started with Babylonian captivity
And will end at the 2nd coming
Click to expand...

You can’t add very well.... If he Rose that is one.... If Paul say him on the road to Damascas that is two.. If the founders of the Mormon’s saw him that is three.... But if you disagree then maybe you saw him in your cornflakes earlier this morning that is three.... Regardless Jerusalem is really Four cities...Yeru.... Shalem... City of David and one other... I am sure if someone was smart enough this could be resolved if... And that is a big big IF that is what this is truly about after all because the Russians earlier this year declared Jerusalem as the capital of Israel and no one said boo accept a few raised eyebrows.... This is just another excuse to get violent on the Palestinian parts because they are being ignored by their Arab brethren who are probably tired of handing them out money and have better things to do thenlistening to their shrill cries after all the squeaky wheel always gets the oil...
You must log in or register to reply here.

Collins wants republicans to vote for her but she wants the next SC pick to be democrat!?
10 11 12