Looks like these monsters have started to kill the hostages. 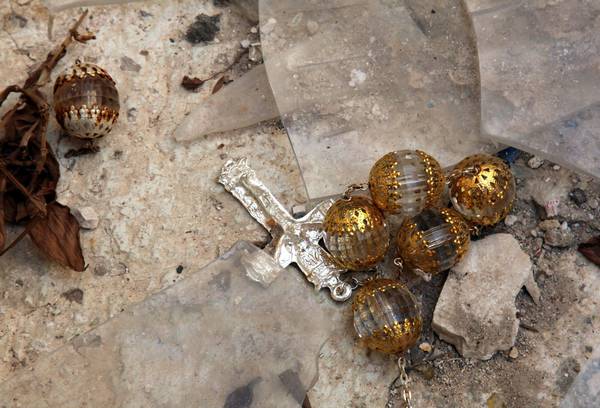 A church in Syria vandalized by Isis fighters
(ANSAmed) - ROME - The Islamic State (ISIS) has killed 15 of the Christians it took hostage in northeastern Syria earlier this week.

The news was given by Archimandrite Emanuel Youkhana to the Catholic organization Aid to the Church in Need on Thursday. ''Many of them,'' he said, ''were defending their villages and their families.'' One woman was beheaded in the village Tel Hormidz and two men were shot to death. There is no information at the moment on how the other 12 were killed. Youkhana added that the number of those known to have been taken hostage had risen to about 350. In addition to the hundreds previously reported, some 80 inhabitants from the Tel Jazira village, 21 from Tel Gouran, 5 from Tel Feytha and 3 from Qabir Shamiya have been taken. Almost all are being held in the Sunni Muslim village Um Al-Masamier.

Terrible news and the sub-humans deserve death...but how is this any different from what Muslims have committed since Mohammed?

The history of Islam is intolerance of anyone who is not of their faith. For centuries they have murdered, raped, enslaved, forced conversion, made Christians and Jews suffer all sorts of indignities as dhimmies with no rights, treated women as less than human, and on and on...and it still goes on today.

Now the American leftist will say they are no different from Christians, thus ignoring history and twisting they minds into a grotesque political correct dysfunction.

That is what the isis hopes to do with all Christians and others that don't bow before allah. This is what the founder of islam did as he spread it through the middle east, north Africa and into parts of Europe.

Matthew said:
That is what the isis hopes to do with all Christians and others that don't bow before allah. This is what the founder of islam did as he spread it through the middle east, north Africa and into parts of Europe.
Click to expand...

But the POTUS claims ISIS is not Islam...

and while everyone is so busy "fighting" ISIS......Assad goes almost unchallenged.
Hezbullah did loose a leader in syria
You must log in or register to reply here.

Why 'Islamic State' is terrorizing Christians

5
Assault Weapons Ban would be unconstitutional. "A State Militia must be maintained and well regulated"
40 41 42

I Hear Texas Will Be Turning Blue Soon
6 7 8