Is this Goodbye Hillary?

Will This Footage Cost Hillary the Election? You Make the Call.

Unlike Trump, Hillary actually could shoot someone in cold blood in downtown NYC, and only one vote.

(and he would likely vote in absentia)

All candidates hold fundraisers. Why should this be different? Besides, Ben Carson was doing a BOOK TOUR of all things when he was supposed to be running.

Why not say that she's happy to get a breather from Iowa? It's at least 2 speeches per day in different locations, and I'm sure it can be taxing to meet new people DAILY.

She was just happy that she finally caught a small break and was around people she already knew.

Bernie bitching about this is pretty much a non issue.

She said she was taking a breather, I don't see anything wrong with that...

The problem is that Gates ...

who owns Microsoft....is the biggest donor and fan of the Hilda Beast

And Reps and Dems are using Microsoft apps in Iowa tonight

skye said:
The problem is that Gates ...

who owns Microsoft....is the biggest donor and fan of the Hilda Beast

And Reps and Dems are using Microsoft apps in Iowa tonight

Go to Conspiracy Theories and start a thread if you're silly enough to believe that something like that would happen.

If Hillary is Elected President and Indicted, Can She Pardon Herself?

CrusaderFrank said:
Bernie was correct to be suspicious of a Dem counted vote
Click to expand...

Republicans are famous for gerrymandering districts in advance of an election, in order to obtain a directed verdict, disguised as a popular vote.

Democrats are infamous for cheating and miscounting and lack of electoral transparency in order to obtain a directed verdict, disguised as a popular vote.

Rather like what we just saw in Iowa - a tradition of not releasing actual figures - and missing precinct returns.

For an example of the latter, see: Chicago and Cook County Democratic Party Machine

A (locally famous) Chicago Sun-Times reporter wrote an interesting treatise on such filth, back in the late 60s or early 70s, when Da Machine was at its height, and at its very worst - a Must Read for PoliSci students back then - and still an amusing and useful guide to the fundamentals of a now better-disguised but still vibrant Machine of our present age... 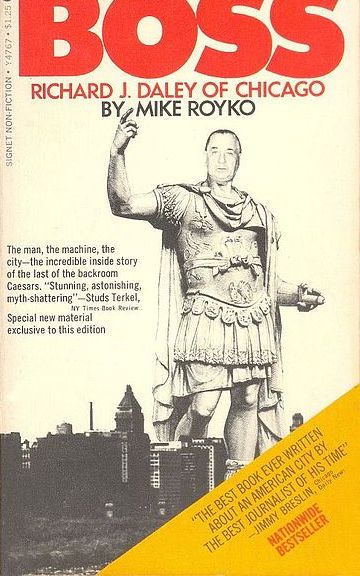 A Democratic Party machine with roots at the turn of the 20th Century, and ruling a city of 3 millions virtually unchallenged since the days of Anton Cermak in the early 1930s.

A Democratic Party machine still very much alive and well, modified to fit the times, by King Richard's own son, Richard II, and Michael Bilandec, and Jane Byrne, and Harold Washington, and Rahm Emanuel, and stinking-up the Illinois political landscape to this very day.

A Democratic Party machine, so foul and corrupt, that every election has to be watched like a hawk, to soften the worst excesses of vote-fraud, and, yet, it still manages to muster enough sheeple - including gullible minority folk - to vote for them, to keep them in power, year after year, and sickening decade after decade.

A Democratic Party machine that has overseen Chicago's descent into Hell itself, as it has transformed into a shit-hole, and a free-form Living Target Shooting Range, in its festering ghettos, as its Ruling Class in City Hall soaks-up Gubmint contracts and lives the good life.

A perfect place for Obumble's former Chief of Staff to land a Mayor's slot, on his way out the White House door, eh?

Corruption and Democratic Party Machines are like corn flakes and milk - they belong together.
Last edited: Feb 2, 2016
You must log in or register to reply here.

OH-11: Hillary & Bernie have aligned themselves with opposing candidates in a special congressional election for a deep-blue seat in Cleveland

Yesterday at 7:30 AM
Moonglow

Get it now or wait

There is no controversy over Babbett
3 4 5

A moment ago
irosie91
I
F
Im bedridden with the China virus.

A moment ago
Foreigner Looking In.
F
H
Another way Biden is adding to Americans' cost of living... gas prices...
2 3 4