How to be successful in Lagos, Nigeria

Lagos is a land of opportunities. A lot of people come to the city with nothing but eventually rise to the top. The road to success is a different one for different people but in Lagos there are some things that must be done properly.

Some people come to Lagos and for years, they either remain stagnant or slide down the ladder of fortune. This is because they fail to do some things that are necessary to improve financially in the city.

Here are reasons you are still unsuccessful in people

Lagos is all about networking. If you do not know the main man, you need to know someone who knows the main man. Whether directly or remotely connected to the main people, you need to find a way to get in touch with them. Successful Lagosians have been able to build and maintain relationship with people. This is not just the guys in your hood but the real people who can help to advance your mission. If you fail to roll with the right group, it might be difficult to succeed in Lagos.

If you did not come to Lagos with a silver spoon, you should be ready to hustle. You can’t get anywhere in Lagos by ‘forming’ when you don’t have money. To be successful in Lagos, you must be ready to rough it and forge you way to the top. If you are a princess or a prince, you need to put your royalty in your bag and work your way ahead. Rolling around with a fake ego will not make you successful in Lagos.

To be successful in the city, you need to imbibe the culture of saying. You can’t afford to ‘eat with all your fingers.’ You must be able to save for the rainy day. Saving will also help you to grab the opportunities that exist in the city. If you spend everything that comes your way, you are on the path to self-destruction in the city as people are quick to disappear when you become a liability. If you make money on a daily basis, you still cannot afford to throw money away today as the so called certain income might not come after all.

Successful people in Lagos go after assets while liabilities come after. If you want to continue to be relevant in Lagos, you must put your money in places where you can get financial return. Riding around in a big car or brandishing shiny wrist watch will not increase your financial base in Lagos. Successful Lagosians go for lands and properties and can fall back on it.

Everything in Lagos is about packaging. If there is something you can do or sell, there are hundreds of people in the city who do the same. What can give you the edge is good presentation and packaging. Lagosians are easily waohed by how good something looks so you must be able to impress them in a very short period. You can roll with the big men in the city and dine at the same table with them and you are presentable. Many a person can do things well in Lagos but because they can’t present it well, someone else will get the project and hand it over to them at a ridiculous price. You need to be able to make it look good in order to move forward in Lagos.

Airlines Pull Out of Nigeria as Its Economy Tanks
June 03, 2016 — United Airlines flies daily between to Lagos — Nigeria's largest city — and the U.S. city of Houston, Texas. But not for much longer.

Media reports say demand for the route connecting the two oil-industry capitals has fallen. The airline is also having trouble converting proceeds from ticket sales in Nigeria's naira into dollars. United is not the only airline with this problem. Spanish carrier Iberia recently ended its flights to Nigeria from Madrid. The International Air Transport Association says nearly $600 million in airline revenues is trapped in Nigeria. Chris Aligbe, CEO of aviation consulting firm Belujane Konzult, says if airlines can't get their money out of a country, they leave. "Airlines are in business to make money and to survive,” he said. “And when they make money and they don't find the value in the money they are making, they will give up." 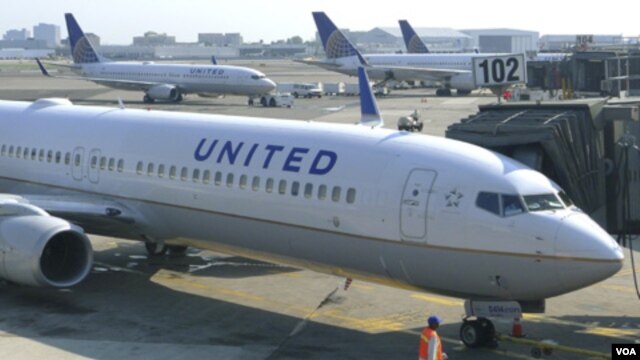 United Airlines will cease flights to Lagos, Nigeria's largest city​
The global drop in the price of Nigeria's top export, oil, has caused a shortage of dollars in the country. Capital controls imposed by the government mean many companies struggle to move profits out of Nigeria. Nigerian airlines — such as Arik Air and Medview — that fly internationally may see more passengers attracted to them, Aligbe said. These airlines can accept payments in naira without having to worry about moving the money overseas. But these airlines will still have to settle bills in the countries they serve in foreign currency. "They are facing very serious challenges in terms of that. But they are also gaining in terms of passengers," Aligbe said. Foreign airlines have taken measures to reduce their exposure to naira. Delta Air Lines, for instance, doesn't accept payment in naira for certain tickets.

While they may reduce their services, Aligbe said countries with longstanding ties to Nigeria are unlikely to end their flights. Ethiopian Airlines has been flying to Nigeria since the 1960s. British Airways also has been flying to the country since it was a colony of the UK. And Turkish Airlines connects Nigeria to a country it does hundreds of millions of dollars in trade with every year. "I know that airlines like BA will never pull out,” Aligbe said. “I know that Ethiopian Airline will not pull out. I know that Turkish Airlines will not pull out." Nigeria's central bank announced last month that it would alter its foreign exchange policy. Details on those changes have yet to be made public.

B
trump Cannot Lose In November, If He Is To Avoid Prosecution
2

W.H.O. says women 18-50 should be banned from drinking alcohol

Congressman Calls On Biden To Undergo a Cognitive Test

There is no controversy over Babbett
3 4 5