Course the idiots running the FR won't pay attention then they will shrug their shoulders and say what happened when the dollar collapses and the economy goes down for good. 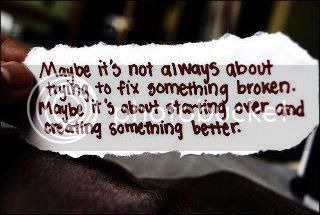 Course the idiots running the FR won't pay attention then they will shrug their shoulders and say what happened when the dollar collapses and the economy goes down for good.
Click to expand...

It is not possible that though somethings may not work or may have worked for someone else, that it may or may not work for you? I personally do not consider the experiences of others as gospel truth marker for future practices: Caution is what I gather.
W

Where's all the money from diamond sales?...

However, he said that the following day some $30m of revenue had been paid in. Mr Biti told the BBC he made the revelation in order to emphasise that the government was unable to finance elections, not that it was insolvent. Polls are due this year, with President Robert Mugabe's Zanu-PF fighting Mr Biti's Movement for Democratic Change. Mr Biti has previously complained that diamond mining companies have not been paying revenues to the government. The power-sharing government set up in 2009 ended years of hyperinflation by using the US dollar, but the economy remains fragile.

Mr Biti told the BBC's Focus on Africa radio programme that his statement had been deliberately taken out of context. "You journalists are mischievous and malicious - the point I was making was that the Zimbabwean government doesn't have the funds to finance the election, to finance the referendum," he said. "To dramatise the point, I simply made a passing reference metaphorically that when we paid civil servants last week on Thursday we were left with $217... but even the following day we had $30m in our account."

Zimbabwe needs nearly $200m (£127m) to pay for a referendum on a new constitution, as well as the election. The government-run Herald newspaper says Mr Biti and Justice Minister Patrick Chinamasa have been given the task of sourcing this money from donors. Analysts say the power-sharing government has achieved some economic stability.

However, high levels of unemployment mean the country's tax and revenue base remains extremely low. "We're in a challenging position, we're a small economy and we've got huge things to be done but the minister for finance of Greece has an even worse story," Mr Biti told the BBC.

Mugabe needs to let go of some o' dat money he's been hoardin'...

Cash-strapped Zimbabwe government delays military salaries
Jun 19,`16) -- Zimbabwe's cash-strapped government has announced it will delay paying June salaries for the military and police by up to two weeks.

It said other workers on the state payroll will only receive their salaries next month. The military will be paid on June 27 and the police three days later, said the finance ministry in a notice dated June 16. Civil service workers in other departments will only get their June salaries in mid-July, it said. The military, a key pillar of President Robert Mugabe's rule, is usually the first to get paid around mid-month.

Zimbabwe has been delaying pay dates for its employees for nearly a year due to revenue problems, but this is the first time the salaries have been delayed so long. "Against the background of severe revenue under-performance and related cash flow challenges government has been honoring its wage bill obligations, albeit, through the continuous shifting of pay dates," read the notice.

Zimbabwe has been under pressure from the International Monetary Fund to cut its wage bill, which consumes more than 80 percent of government revenue. The government is the country's largest employer with 554,000 on its payroll, according to figures presented to parliament by Finance Minister Patrick Chinamasa. About 40,000 are in the military.

Mass factory closures have caused the government's tax revenue to decline. Low foreign direct investment and a ballooning debt have worsened the situation. imbabwe is not operating with its own currency, but instead uses the U.S. dollar and other currencies as its legal tender. A shortage of the U.S. currency has caused severe cash shortages. The result has been long bank lines as people struggle to get cash from their savings and salaries.

Zimbabwe 'shut down' over economic collapse
Wed, 06 Jul 2016 - The streets of Zimbabwe's main cities are deserted during a nationwide stay away to protest at the lack of jobs and unpaid wages.

The protests were organised through the messaging site WhatsApp but it is not clear which group is behind it. The internet was often unavailable on Wednesday morning but the government has denied blocking it. The BBC's Brian Hungwe in the capital Harare says it is one of the biggest protests in many years. Protesters also set up burning barricades in Harare. 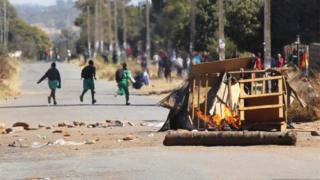 Schoolchildren run past a burning barricade, following a job boycott called via social media platforms, in Harare​
Some of the messages calling for a stay away also urged President Robert Mugabe to step down. The 92 year old has governed the country since independence in 1980. On Twitter, activists have been using the hashtag #ShutDownZimbabwe2016 to mobilise support. Many civil servants have not been paid in more than a month - they went on strike on Tuesday.

On Monday, taxi drivers complaining about police extortion clashed with the security forces in parts of Harare. The economy has also been hit by currency shortages and a severe drought. "I can't go to work when the rest of the country is not going to work," Sybert Marumo, who works for an electrical shop, told the AFP news agency. "Life is tough and we need to show the government that we have been stretched to the limit."

Zimbabweans stay at home in protest against economic hardships
Thursday 7th July, 2016: Zimbabweans stayed at home on Wednesday and foreign banks and most businesses in the capital shut down, in one of the biggest protests against high unemployment, an acute cash shortage and corruption for nearly a decade.

Evan Mawarire, a pastor whose social media movement #ThisFlag organised the "stay-away", demanded that President Robert Mugabe fire corrupt cabinet ministers and scrap plans to introduce local bank notes or face a two-day shut-down next week. Wednesday's protest followed violent clashes between taxi drivers and police on Monday that led to the arrest of 95 people. It also coincided with a strike by doctors, teachers and nurses whose salaries had been delayed. A devastating drought has compounded economic hardships including high joblessness while an acute cash shortage has angered Zimbabwe's citizens.

In a story quoting John Mangudya, the governor of Zimbabwe's central bank, the Financial Times reported on Wednesday that the African Export-Import Bank was arranging a seven-year loan of US$986 million so Zimbabwe could pay back arrears to the World Bank. The FT quoted Mangudya as saying Zimbabwe hoped to pay off its arrears before the September board meetings of the International Monetary Fund and the African Development Bank, paving the way for IMF assistance to alleviate its cash crunch. Afreximbank and IMF officials could not immediately be reached for comment.

The 39-year-old Mawarire started the #ThisFlag campaign in April to protest against corruption, injustice and poverty. The campaign has attracted thousands of followers who have been speaking out against government excesses. Wednesday's protest was organised via Twitter, Facebook and WhatsApp. Mawarire's campaign includes a series of demands: for Mugabe to fire and prosecute "known" corrupt ministers, for government salaries to be paid on time and for police to remove roadblocks which most people say are posts for bribe taking officers. "The ball is in your court," Mawarire said on his Facebook page. We are ready to close down again and this time we will add another day, Wednesday and Thursday. We are not playing and we ask you to take us seriously." Mugabe's spokesman, George Charamba, was not available to comment.

State telecoms regulator POTRAZ said in a statement it would arrest people sending "subversive" messages that cause unrest. Mugabe, who has held power since Zimbabwe gained independence from Britain in 1980, was attending a scheduled meeting on Wednesday of his party ZANU-PF's politburo, the party's top executive organ. Party spokesman Simon Khaya-Moyo declined to say whether ZANU-PF would discuss the protests. In the volatile township of Mufakose, to the west of Harare, hundreds of youths barricaded roads to keep people from going to work, Reuters witnesses said. More than 40 people were arrested across Zimbabwe for blocking roads and disturbing the peace, said Charity Charamba, a police spokeswoman. Among them was a Belgian tourist held in the resort town of Victoria for unlawful protests, she said, correcting her earlier statement that an Australian had been detained.

i wonder how Obama and Mugabe are related?
You must log in or register to reply here.

What Can We Cut to Balance the Budget?

Jason Chaffetz: Dear Republican Trump haters – What did you get for your trade?
4 5 6

Biden Lies So Deplorably About His Wasteful Spending Plans, Even CNN Fact-Checks Him - "Biden's claim is false."

America's loss in Afghanistan, is the End of America as the sole Super Power.
11 12 13

Why would you want Trump to be president again?

I love this image.
2

People defending Biden are getting weirder and weirder
11 12 13