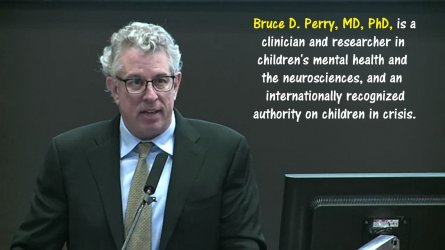 
Bruce D. Perry is an American psychiatrist, currently the Senior Fellow of the Child Trauma Academy in Houston, Texas and an Adjunct Professor of Psychiatry and Behavioral Sciences at the Feinberg School of Medicine in Chicago, Illinois.

A clinician and researcher in children's mental health and the neurosciences, from 1993-2001 he was the Thomas S. Trammell Research Professor of Psychiatry at Baylor College of Medicine and Chief of Psychiatry at Texas Children's Hospital.

He also serves as Senior Consultant to the Alberta Minister of Children and Youth Services in Alberta, Canada. Dr. Perry is also a Senior Fellow at the Berry Street Childhood Institute in Melbourne, Australia.
___
Footnote: Bruce Perry was 19-yrs-old when he married his HS sweetheart Arlis Perry, who was brutally murdered inside a church two months after their wedding.

In 2018 DNA identified the church's security guard as her killer. When police showed up at the guard's residence with a search warrant, the dude offed himself via a self inflicted GSW.

Peace.
___
American *(Children)* Lives Matter; Take Pride In Parenting; *End Our National Epidemic of Child Abuse and Neglect*
You must log in or register to reply here.

We Need a Healing Movement!

Let's Raise Children Who Won't Have To...

Why Are Prominent African American Voices Silent About Child Abuse?

at least 21 teenagers found dead in a South African club !