The plague is caused by Yersinia pestis, a bacteria found in rodents and spread by fleas. Recent flooding in the nation has displaced tens of thousands of people and an "untold numbers of rats," leading to fears the disease could spread, said Margaret Chan, director-general of the World Health Organization.

Once an infected flea bites human beings, they can develop the bubonic plague, which is marked by swollen lymph nodes. If the bacteria reaches the lungs, one can develop pneumonic plague.

The pneumonic type is rare but more dangerous than bubonic plague because it can be transmitted between humans through inhalation and coughing. "If diagnosed early, bubonic plague can be successfully treated with antibiotics," the World Health Organization said. "Pneumonic plague, on the other hand, is one of the most deadly infectious diseases; patients can die 24 hours after infection."

This is the same disease that killed 50 million people in Europe and started the dark ages.

del said:
"yea, verily, shut the fuck up, for thy whining dost offend me. takest thou a tissue."

Oh no. Now obama will be able to import more disease.

Tipsycatlover said:
Oh no. Now obama will be able to import more disease.
Click to expand...

Yeah he needs another crisis
Sitting around in my shorts in my paid for house.
goflyakite558.wordpress.com

Because of high populations of prairie dogs that carry fleas with the plague virus, Colorado usually reports at least a few cases of canine plague every year. There were six in 2012 and I think one human case. Dogs can transmit it to humans. We have high rates of rabies too. Skunks are the culprit there.
.
W

Bubonic plague germ been around longer than first thought...

'Black Death' germ has afflicted humankind longer than suspected
October 22, 2015 - The plague germ that caused the "Black Death" in the 14th century and other ferocious pandemics has stalked humankind far longer than previously known.

A study unveiled on Thursday of DNA from Bronze Age people in Europe and Asia showed the bacterium, Yersinia pestis, afflicted humans as long ago as about 2800 BC, more than 3,000 years earlier than the oldest previous evidence of plague. The plague has killed untold millions of people over the centuries in pandemic flares that reshaped human society. "It seems to have started impacting human populations over large geographical scales way earlier than we thought," said evolutionary geneticist Eske Willerslev of the University of Copenhagen and University of Cambridge. 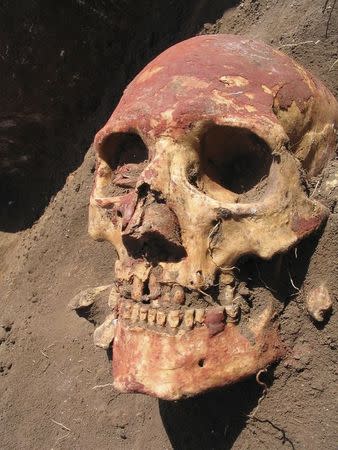 A skull from a mass grave is seen in Bateni, Russia, in Central Asia's Altai mountains​
They studied DNA from the teeth of 101 people from six sites: three in Russia, one in Poland, one in Estonia and one in Armenia. Seven had evidence of Yersinia pestis infection. The researchers also tracked the timing of a pivotal event in plague evolution, a mutation that made the germ capable of being transmitted by fleas. They found Yersinia pestis with this mutation in a person who died in Armenia in about 951 BC, the most recent of the 101 studied.

The study, published in the journal Cell, showed plague was widespread across Europe and Asia during the Bronze Age. The oldest evidence of infection was found in the DNA of people from about 2782 BC and 2794 BC buried in a mass grave in Bateni, Russia, in Central Asia's Altai mountains. Previously, the oldest evidence of plague came from about 540 AD in Germany, Technical University of Denmark geneticist Simon Rasmussen said. "The Bronze Age plague represents an intermediate state where it had not yet evolved the capabilities to be transmitted by fleas or cause bubonic plague. However, it was still able to cause septicemic and pneumonic plague," Rasmussen added.

Where is the music when you need some?
To live is to suffer~Fritz Lang-Film Director

Why do people believe everything that they see on TV without questioning it?

Remember when China destroyed half of Europe? Origins Of The Black Death Traced Back To China, Gene Sequencing Has Revealed

A moment ago
aiaibiden
A