"The little fella looks SATISFIED AS HELLlike a tit vampire with all the drool and boob milk dripping off his chin."

Hey... Let's be careful about who you call a vampire...

Count Dracula said:
Hey... Let's be careful about who you call a vampire...
Click to expand...

Click the link....that's not Philo's quote, he's quoting from the article.

Whether bottle or breast fed, all babies get 'milk drunk' and get that far away look in their eyes when full. As it should be.
R

Zoom-boing said:
Whether bottle or breast fed, all babies get 'milk drunk' and get that far away look in their eyes when full. As it should be.
Click to expand...

one of my favorite pictues of my baby daughter is her in this state.
R

Zoom-boing said:
Whether bottle or breast fed, all babies get 'milk drunk' and get that far away look in their eyes when full. As it should be.
Click to expand...

Study Suggests Moms Who Breast-feed Have Lower Risk of Heart Disease Later
June 21, 2017 - A new study suggests a link between breast-feeding and a lowered risk of heart disease in older women.

The research by Chinese investigators found that women who breast-fed may have lowered their risk of heart disease or stroke by an average of 10 percent when they became older. Researchers at the Chinese Academy of Medical Sciences, Peking University and the University of Oxford analyzed data on 289,573 women whose average age was 51. They found that those who breast-fed had a 9 percent lower risk of heart disease and an 8 percent decreased risk of stroke, compared with women who had never nursed. The benefit was even greater for women who breast-fed their babies for two years or more. Their heart disease risk was 18 percent lower and the risk of stroke 17 percent less.

Each additional month of breast-feeding was associated with a 4 percent and 3 percent lower risk of heart disease and stroke, respectively, researchers said. The findings of the study, the first to look at the long-term health benefits of breast-feeding for women, were published in the Journal of the American Heart Association.

Cardiologist Nieca Goldberg, who was not involved in the study, said the cardiovascular benefits could have been related to the release of oxytocin during breast-feeding. "Oxytocin is a hormone that helps the flexibility of our blood vessels," she said. "And flexible blood vessels are resistant to the buildup of plaque or cholesterol in the walls of the arteries." Breast-feeding provides a number of benefits, such as conferring a mother's immune protection to her infant and protecting a newborn from life-threatening infections in countries with poor water quality. 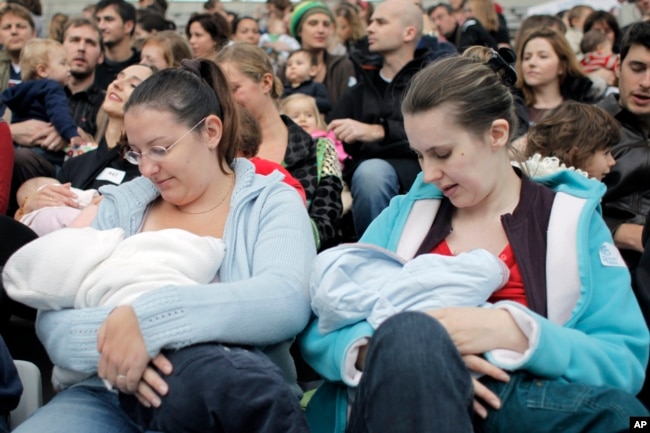 Mothers breast-feed their babies in Paris, Oct. 11, 2008, during a worldwide breast-feeding event.​
There are short-term benefits for mothers, too. Studies indicate that breast-feeding appears to reset the woman's metabolism after pregnancy, so she loses baby weight faster, while lowering her cholesterol, blood pressure and glucose levels. Goldberg, medical director at the Joan H. Tisch Center for Women's Health in New York, said it was possible that women in the study who breast-fed, and saw heart healthy benefits, might have also led healthier lifestyles compared with other women.

"For those women who don't choose to breast-feed, there are other things they can do to prevent heart disease," said Goldberg. "And that's certainly by exercising, something as simple as taking a walk and eating a healthy diet, rich in fruits, vegetables, whole grains and low-fat proteins." Goldberg cautioned that the Chinese study was observational, relying on information provided by the mothers many years after they had given birth, so the findings do not prove a cause-and-effect relationship. She said what's needed is a head-to-head comparison of women who breast-feed with a control group of those who don't, to see whether there are long-term heart-healthy benefits.

UNICEF: Mother’s Milk Best For Newborn Babies
August 01, 2016 — [The United Nations Children’s Fund (UNICEF) warns that 77 million babies deprived of mother’s milk within the first crucial hours after birth are at great risk of dying within a month. To mark World Breastfeeding Week (August 1 to 7), UNICEF and the World Health Organization (WHO) are calling for newborns to be breastfed exclusively for six months.

UNICEF says newborns should be breastfed within the first hour of life. This provides them with the essential nutrients, antibodies and skin-to-skin contact with their mother that protects them from disease and death. UNICEF reports the longer breastfeeding is delayed, the higher the risk of death in the first month of life. It warns delaying breastfeeding by 24 or more hours after birth increases that risk to 80 percent. On the other hand, it notes more than 800,000 lives would be saved if all babies were fed nothing but mother’s milk from the moment they were born until six months of age. 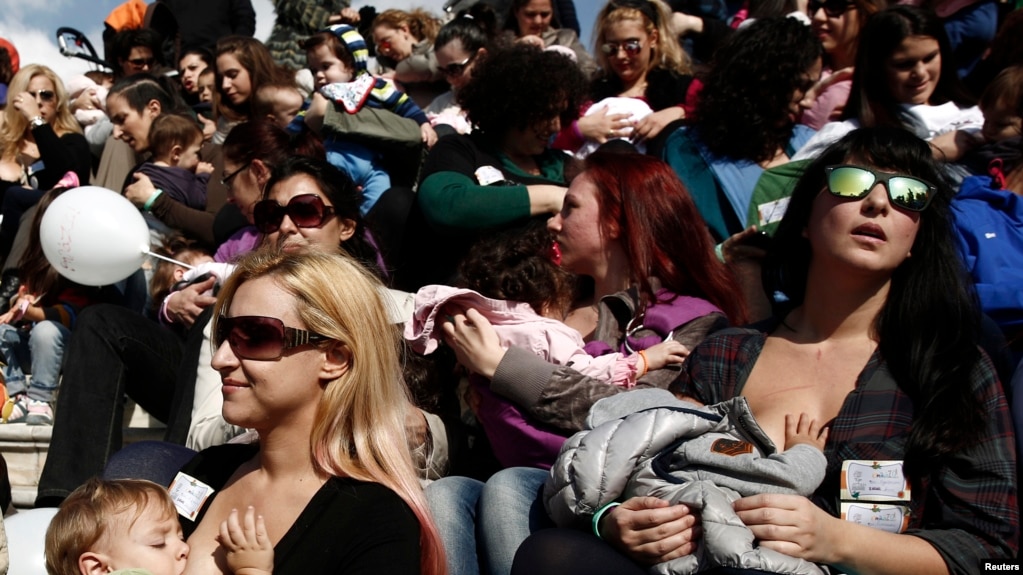 Women breastfeed babies during a mass event in Athens, Greece​
Unfortunately, the World Health Organization says this message is slow in getting through. WHO spokeswoman, Fadela Chaib, said new mothers are not receiving the support and encouragement they need to breast feed their babies. “The slogan this year is breastfeed anywhere, any time because it is also, as I said, the role of society to make this possible for mothers who want to breast feed. This being said, yes, it is an old problem. We have always been advocating for more breastfeeding because we are convinced of the benefit of breastfeeding. It is really the ideal food for infants,” said Chaib. For example, she said, breastfeeding protects children against many common illnesses. Breastfed children perform better on intelligence tests, are less likely to be overweight or obese and less prone to diabetes later in life.

Chaib told VOA that inappropriate marketing of infant formula continues to undermine efforts to get women to breastfeed their babies. “We are not against them producing this kind of milk. What we are against is the fact that they promote it as if it is the same value that the milk of the mother. It is a lie. It is not the same,” said Chaib. Progress in getting more newborns breastfed within the first hour of life has been slow over the past 15 years. Surveys show in sub-Saharan Africa, where under-five mortality rates are the highest in the world, early breastfeeding rates have remained unchanged.

Liberals and especially feminists don't like talk of breast milk. For one thing, they never had any as a child, they were given powdered milk. Second, feminists never have any breasts.
You must log in or register to reply here.

Is the media turning to the right?

The next Republican President
2

The Intentional Destruction of our Civilization: Have you noticed? Do you care?
2

This May Just Turn Into The Claude Rains Election