The dems are leading in early voting in NC and FL (even so, I think both states are up for grabs) and the pubs in GA.

Over 23 million early votes have been cast nationwide 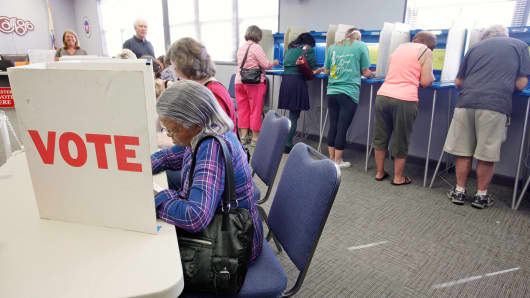 Jonathan Drake | Reuters
Voters fill in their ballots at a crowded polling station on North Carolina's first day of early voting for the general elections, in Carrboro, North Carolina, October 20, 2016.
As of October 31, over 23 million votes have been cast in the 2016 Presidential Election nationwide.

In 12 battleground states, over 11.5 million votes have been cast. This includes over 3.5 million in Florida, more than 1.5 million in North Carolina, and over 1.3 million in Georgia.

More from NBC News: Democratic-affiliated voters have outpaced Republican-affiliated voters so far in Colorado, Iowa, Michigan, North Carolina, Nevada, Ohio, Virginia and Wisconsin. In Arizona, Florida, Georgia and Pennsylvania, Republican-affiliated voters have outpaced Democrats.
Zone 2": Political Forum / Israel and Palestine Forum / Race Relations/Racism Forum / Religion & Ethics Forum / Environment Forum: Baiting and polarizing OP's (Opening Posts), and thread titles risk the thread either being moved or trashed. Keep it relevant, choose wisely. Each post must contain content relevant to the thread subject, in addition to any flame. No trolling. No hit and run flames. No hijacking or derailing threads.
You must log in or register to reply here.

Media Collusion with the Clinton Campaign would be Almost Comical...

Dismissing Vote Fraud as A Non-Issue Is Getting Harder
2

More than 90 million ballots cast as of Saturday

A moment ago
Big Bend Texas

What is the reason for the uniqueness of the American nation?

Are the doctors really professional liers?