What retro computers have you owned?

What retro computers have you owned?

Apple IIe was my first, back in the early ought-80s.
K

I had a Compaq portable, as big as a sewing machine and the first Apple.

Wish I had kept the Apple. I went as far as writing an OS so that I could use labeling in Assembly. The Pro-DOS required direct memory input of Assembly, which was a nightmare.

I remember when I went into the aircraft instrument apprentice school. We had an entire course on how to use the slide rule. I remember buying a $25 state of the art slide rule from the local college. It could do quadratic functions and had a resolution out to 4 places. Man, those were the days. In college you could always tell the engineering students by the huge slide rules they carried strapped to their hips like giant knives. Then they started wearing those giant HP calculators. That was all before PC's. Then the college had an entire building devoted to housing one mainframe computer, in which we wrote programs, using key punch cards. Those were the days.

Enough of the nostalgia: My first PC was a Gateway 2000. After that, I built every other PC I ever had. I am on my 5th built PC, now. I would never buy a commercial PC, other than a laptop, of which I own, an HP.

Trash 80 was my first 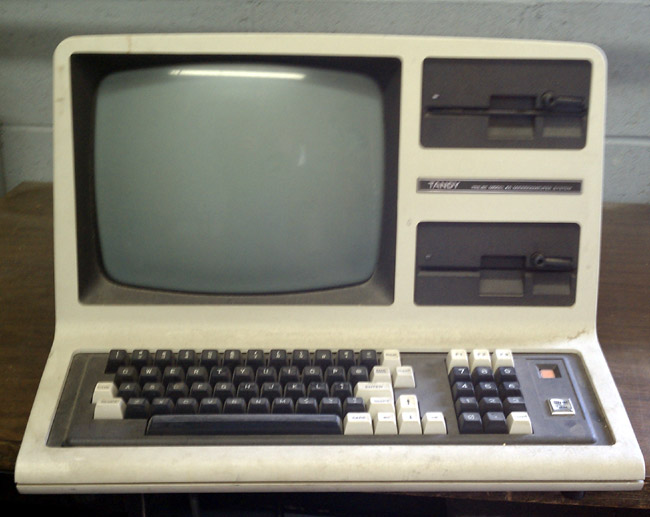 Man, I couldn't even afford a Trash 80, back then. I remember them quite well.

NLT said:
Trash 80 was my first

I could do amazing things with that machine.

Remember "Programming the Z80 by Dr. Rodney Zaks?" It was the Bible of machine and assembly language for the TRS-80 and early CPM based PC's.

XPostFacto said:
Man, I couldn't even afford a Trash 80, back then. I remember them quite well.
Click to expand...

That was my first real money making machine. Developed my first income statement, that eventually turned into a usable General Ledger.

Then Lotus came along, and the game changed.

I took a data processing course in college back in the ought-70's.
We used to run stacks of these LOL. We spit them out on a typing machine, bundled them, and dropped them off at the processing window. Some stacks were 4 inches thick.

My first computer, bought nearly 25 years ago, was made by a company called CompuAdd...

Yeah, but most of those are video game consoles, not computers.

Atari made a couple of early computers, the 400 and the 800. I had a 400, which made me like computers, but it was a bit of a joke. Took about 15 minutes to boot off of a cassette tape player.

Atari 400 computer
You must log in or register to reply here.

Do you use a program to manage your camera pictures?

What Vices Are You Enjoying During the ShutDown?
2

Biden's entire campaign is based on the media's lies about Trump.

How racist is Canada?

Whose Truth Should We Be Allowed To Hear?

Judges rule for mail voting in Montana and Alabama