The UN is a fucking joke!

DAKAR, Senegal -- The African heads of state who converged on the capital of Equatorial Guinea this summer are used to life's finer things  yet even they were impressed.

The minuscule nation located on the coast of Central Africa spent several times its yearly education budget to build a new $800 million resort in which to house the presidents attending this summer's African Union summit.

Besides an 18-hole golf course, a five-star hotel and a spa, the country built a villa for each of the continent's 52 presidents. Each one came with a gourmet chef and a private elevator leading to a suite overlooking the mile-long artificial beach that had been sculpted out of the country's coast especially for them.

Western diplomats say that the charm offensive worked, and on Friday the United Nations' cultural arm may be forced to create a prize named after Equatorial Guinea's notoriously corrupt president, due to a resolution passed in June by the presidents staying at the lavish resort.

If that happens President Teodoro Obiang Nguema, a man whose regime is accused of gross human rights violations, will be associated with an organization whose stated mission is the promotion of peace and human rights through cultural dialogue.

During the AU summit this summer, Obiang succeeded in getting the body to pass a motion calling on UNESCO to approve a prize named in his honor.

Armed with this resolution, the 13 African delegates on UNESCO's executive board are threatening to force a vote on the UNESCO-Obiang Nguema Mbasogo Prize for Research in the Life Sciences as early as Friday when the board meets in Paris, said five officials taking part in the discussion.

The $3 million prize was first proposed in 2008 and UNESCO initially agreed to create it, only to suspend it as outrage erupted over the provenance of the money and accusations of abuses by Obiang against the people of his Maryland-sized nation.

A senior Western diplomat in France who is close to the negotiation, said that Obiang, as the rotating chairman of the African Union, forced through a resolution during the AU summit that unified the African position.

"In the past our ability to keep the prize in the deep freezer depended on divisions within the African group," said the diplomat, who asked not to be named because of the sensitivity of the matter. "At UNESCO on the executive board, the African group makes up a large percentage of the board  and when they are completely unified they can always count on complete support from the Arab group."

Together, the Arab and African delegations account for 20 out of 58 votes. Thirty is needed for the measure to pass; fewer if some governments abstain. The diplomat said the Equatoguinean delegation has been hanging out in the halls outside of the board's meeting room in Paris, trying to influence the vote of undecided delegates when they step outside. Among the ambassadors from Africa, there are misgivings about the prize and several have privately said they feel embarrassed voting for it, but believe their hands are tied due to the African Union resolution.

"What Obiang has been able to set up here is a dynamic by which the ambassadors are constrained  their backs are against the wall because their position has been mandated by their heads of state," said the official.

The diplomat's account of the situation was confirmed by a senior European diplomat who is also on the UNESCO executive board, as well as by leading rights groups including New York-based Human Rights Watch and London-based Global Witness which have been at the forefront of trying to stop the creation of the prize.

The Western nations opposing the measure are hoping to avoid a vote on Friday, the diplomats say, on the argument that forcing one is against UNESCO's tradition. They fear that if it goes to a vote, the measure will pass, forcing the body to implement the prize.

Obiang seized power in a coup 32 years ago after toppling the former leader, who was executed. The United Nations Rapporteur on Torture toured the country's prisons in 2008 and determined that torture is systematic, including using electroshocks through starter cables attached to the detainees' body with alligator clips.

In February, the government imposed a blackout on news regarding the Arab Spring uprising. A disc jockey who dared refer to Libya during his music program had his microphone cut off minutes into his show and the program was pulled off the air for two months.

Another concern is the provenance of the $3 million that Obiang has said he will donate to endow the prize. The Obiang family has become fabulously wealthy during the president's reign and is accused of pilfering the nation's oil wealth.
Click to expand...

Teodorin Obiang Nguema is accused of buying a mansion and sports cars in France with a fortune amassed from oil-rich Equatorial Guinea's public funds. Mr Obiang, who is the president's son, denies the allegations. The trial is the first since France started investigating African leaders accused of illegally acquiring wealth. It comes after a nearly decade-long campaign by anti-corruption groups demanding that France act against leaders suspected of stashing their "ill-gotten gains" in Europe. 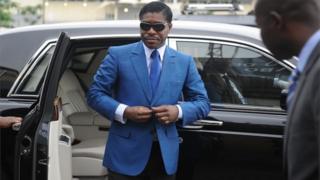 Teodoro (aka Teodorin) Nguema Obiang Mongue, the son of Equatorial Guinea"s president, arriving at Malabo stadium for ceremonies to celebrate his birthday.​
Mr Obiang's six-storey Paris villa, estimated to be worth more than $100m (£80m), is located on Avenue Foch, in one the most prestigious neighbourhoods of the French capital. The West African state's government launched a bid at the International Court of Justice to prevent the trial from going ahead, arguing Mr Obiang had diplomatic immunity. The United Nations' court turned down the request last month.

In November, Swiss authorities seized 11 cars belonging to Mr Obiang, accusing him of money-laundering. Among them was reportedly a Porsche valued at more than $830,000 and a Bugatti Veyron which sells for $2m. In 2014, Mr Obiang agreed to surrender a Malibu mansion, a Ferrari and Michael Jackson memorabilia as part of a settlement with US authorities. The US had filed claims against his US-based assets worth more than $70m, alleging they were proceeds of corruption.

Equatorial Guinea, a small country on the west coast of Africa, struck oil in 1995 but most of its population still lives in poverty. Its president, Teodoro Obiang Nguema, is Africa's longest serving leader. He seized power in 1979, and promoted his son to the post of vice-president in 2012. Mr Obiang has "always said that he earned the money legally in his country," one of his lawyers, Emmanuel Marsigny, told AFP news agency.

Teodoro Nguema Obiang Mangue, who is also Equatorial Guinea's second vice president, faces up to 10 years in prison if found guilty of acquiring real estate, luxury cars and other goods in France with public funds from his country.

Teodoro Nguema Obiang Mangue faces up to 10 years in prison if found guilty of acquiring real estate​
Obiang's lawyer, Emmanuel Marsigny, said he will ask for a delay in proceedings when the hearing starts on Monday, arguing that his client - who is not expected to attend the trial - did not get enough time to prepare his defence.

The International Court of Justice, the United Nations' highest court, refused to order France to halt the prosecution last month after Equatorial Guinea argued that Obiang had immunity.

Russia: Medvedevs decision to step down may serve well

T
State Dept. Asks UN To Send Experts To US To Help Them End ‘Systemic Racism’

A moment ago
forkup
F

Joe Rogan Says He Refused Trump As Podcast Guest —“I Don’t Want To Help Him”: Rogan also referred to Trump as “existential threat to democracy itself"
2