Sweden is likely to deport up to half last year's record 163,000 asylum seekers either voluntarily or forcibly, presenting a major challenge to authorities, Interior Minister Anders Ygeman said on Thursday.

Between 60,000 and 80,000 people will likely have to leave, Ygeman said, which would represent about 45 percent of the total number of applicants.

Both countries have tightened asylum rules to stem the flow and force other countries to share the burden.

The Swedish government fears many people whose applications for asylum are rejected will go into hiding. Police will seek to find and deport them. 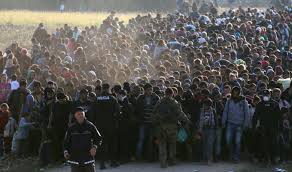 They need to deport all of them

finally some common sense.....guess they are no longer into that multicultural crap.....

If they deport the numbers as assumed above, then Sweden will be maintaining the same percentage, perhaps even less, than the norms. Look them up.

Nothing came of this if anyone wondered...
You must log in or register to reply here.

Does Sweden have the last sane government on earth?
2

T
Two Caravans A Week: 70,000 Detained Along The Southern Border In February
2

Top Ten Toughest Men to Have Ever Lived
2 3 4

How Would You Rank Jan 6th In Human History's Worst Events?
4 5 6

The Press Is Broken

Pillow Man rally a bust...as he promotes the Big Lie
2