Robert Mercer= maybe he is the hacker, has data on 230 million adults in

LONDON — Big data crunched in a nondescript office more than 3,000 miles from the U.S. might just convince you to cast a ballot for Donald Trump.

Using transaction information from loyalty cards, club and gym memberships and charity donations, it seeks to understand which way an individual might lean politically — and how to potentially change their mind.

Although Cambridge Analytica worked with Senator Ted Cruz and Ben Carson during the primaries, several Republican operatives tell WIRED they question the firm’s methodology, willingness to collaborate, and claims of involvement in major projects like Brexit. And the fact that Robert Mercer, a major GOP donor, is an owner of the company leaves some wondering if nepotism plays a role in any contracts the company lands.

A Lot of People Are Saying Trump’s New Data Team Is Shady
Click to expand...

These are the elites who control the elections, rich elite hedge funds are the worst. These elites do not want to pay taxes, want to get rid of the IRS, the EPA and all social programs, which means the elites will just take over, the elties marry elites, have elites children, and live in elite abodes,

they care not about the middle class or the poor, only their money, and how us lower class citizens can wait on them.

Like Obamas said non quoting, You might get into a Trump hotel if your a housekeeper, or get on his golf course if you mow laws, but voting for an elitist, born with a silver spoon, will not make you like him. If you think H. Clinton is crooked , just imagine what we do not know about Trump's history, with all his gag orders.
OP

Mercer is the co-chief executive officer of one of the country’s largest and most secretive hedge funds, Renaissance Technologies, but people who’ve spent time with him say he hasn’t shown any interest in advancing its agenda in Washington. They say he disdains the establishment wing of the Republican Party, which he sees as too cozy with Big Business and Wall Street. Unlike many of his peers in New York financial circles, he doesn’t shrink from the culture wars. He’s supported a campaign for the death penalty in Nebraska and funded ads in New York critical of the so-called ground-zero mosque. He and Rebekah have also directed money to an anti-abortion group and a Christian college, though people who know the father and daughter say they don’t talk about religion.

Critics warned that Citizens United would bring about a new era of corporate influence in politics, with companies and businesspeople buying elections to promote their financial interests. So far, that hasn’t happened much; big corporations, for instance, still play a negligible role in presidential election spending. Instead, a small group of billionaires has flooded races with ideologically tinged contributions. The result has been a shift in power away from the political parties and toward the whims of the donors themselves. In part, this explains the large number and variety of candidates fielded by the Republicans in 2016. 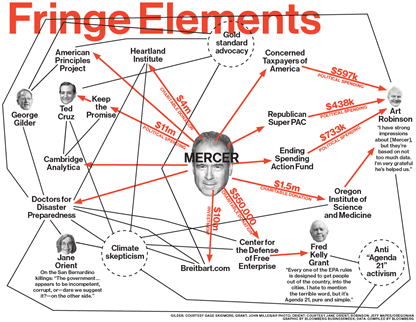 Breitbart.com, which devoted at least six stories to the summit, has proven to be one of Mercer’s better political wagers. He invested $10 million in the media outlet when it was struggling in 2011, according to a person with knowledge of the transaction. Since then, its audience has exploded. In December it announced its billionth page view of the year.

If Hillary can pull it off I give her even more credit.
You must log in or register to reply here.

Why is Fox News Channel being blocked right before the election?

What do Trump supporters feel about the 1.9 trillion stimulus bill
2 3

A moment ago
Kondor3

Why do some people get stimulus checks while others only pay for it?
6 7 8