Romney just spoke and said the first day he will sign order to Boost Domestic energy Production Directs the Department of the Interior to implement a process for rapid
issuance of drilling permits to developers with established safety records seeking to use pre-approved techniques in pre-approved areas.
http://www.mittromney.com/sites/default/files/shared/BelieveInAmerica-PlanForJobsAndEconomicGrowth-Summary.pdf

Now here is why this will happen..
The below long winded and complicated study PROVES that oil drilling increases jobs!

The RIMS II model is the standard method governmental authorities use to evaluate the benefits associated with an economic development project.
According to the Commerce Department, the RIMS II model has been used to evaluate the economic effects of many projects, including: opening or closing military bases, tourist expenditures, new energy facilities, opening or closing manufacturing plants, shoppingmalls, sports stadiums, and new airport or port facilities.
State and local governments have also used the RIMS II model to perform economic analyses.
For example, the Kansas Geological Survey (KGS) used the RIMS II model to evaluate the impact of oil and gas production on the Kansas economy.37
Using the RIMS II multipliers for Kansas, the KGS estimated that the increased value of oil and gas production between 1998
and 2001 induced $500 million in new output, generated $64.3 million in new earnings, and produced 4,742 new jobs in the state of Kansas.
http://www.americanenergyalliance.org/images/aea_offshore_updated_final.pdf

SO if Romney is going to UNDO what Obama did in denying oil leases on Federal lands..

Simply by UNDOING what Obama did would INCREASE OIL product by 100 million barrels a year!
K

obama will continue to decrease and squeeze in a second term when he has more flexibility.

Not only that but if Romney wins the election, the economy, jobs, and business in the US will begin to improve the very next day, without Romney even being able to do anything.

Just the fact that business people in this country will know that their #1 enemy, barack hussein obama is going to be gone will be all they need to begin growing, taking risks, and creating opportunities.
Why don’t you slip into something more comfortable? Like a coma.

Utility crews from several states East of the Mississippi River hit the road this week to volunteer their time and talents in Northeastern states hit hard by Hurricane Sandy. But crews from Alabama got the shock of their lives when other workers in a coastal New Jersey town told them they couldnt lend a hand without a union card.

Derrick Moore, who works for Decatur Utilities in Decatur, Ala., told WAFF-TV in Huntsville that crews in Seaside Heights, N.J. turned him and his crewmates away, saying they couldnt do any work there because theyre not union employees.

As a result, crews from Decatur and Huntsville left the Jersey shore and headed to Long Island to pitch in.

WAFFs Mark Thornton reported that Moore and his coworkers are frustrated being told, in essence, thanks, but no thanks

Union goons are morons. Always have been.
Why don’t you slip into something more comfortable? Like a coma.
OP
H

PredFan said:
Not only that but if Romney wins the election, the economy, jobs, and business in the US will begin to improve the very next day, without Romney even being able to do anything.

Just the fact that business people in this country will know that their #1 enemy, barack hussein obama is going to be gone will be all they need to begin growing, taking risks, and creating opportunities.
Click to expand...

You are absolutely right!
I predict that Wednesday IF the election IS not close with Romney as President the DJI will SOAR!

As you know, Romney DOES NOT hate Businesses! He wants businesses to succeed and doesn't see business as evil, bad guys!

I do really enjoy a good joke ,and this is one.
OP
H

lovemymutts said:
I do really enjoy a good joke ,and this is one.
Click to expand...

Well it won't take much on Romney's part to improve the economy!
All he has to do is remove the barriers that Obama has put in place !
I mean really oil production on federal lands DOWN by 100 million barrels because Obama has signed fewer leases!
That simple!
Get more federal leases signed.. cut out the enormous barriers of red tape which by the way did you hear what Obama's actual words were regarding SANDY???
Anything they need, we will be there," Obama said. "And we are going to cut through red tape.
We are not going to get bogged down with a lot of rules.
We want to make sure that we are anticipating and leaning forward."

Cut "red tape" OBAMA??? Does anyone understand the irony of that statement?

Obama recognizes in emergency need to cut red tape... BUT he doesn't recognize "red tape" is hurting job creation, the economy the business of business???
O

Well the only way these chicks will not hatch is if Obama is re-elected and you evidently don't want to increase jobs?

Myth, Please by all means,give some FACTUAL examples of what Romney's plan is.
O

Like the one we got with the last Republican President?

Accuse your opponents of what you are at present doing. Rush Limbaugh
You know, when you are a messiah, when you have a messianic attitude about yourself,
nobody's supposed to doubt you. Rush Limbaugh
Don't doubt me. I say it, you believe it. That's the rule here. Rush Limbaugh
The power of accurate observation is commonly called Cynicism
by those who have not got it. George Bernard Shaw
Cynics regarded everybody as equally corrupt...
Idealists regarded everybody as equally corrupt, except themselves.
Robert Anton Wilson
Idealism is what precedes experience; cynicism is what follows. David T. Wolf
​
F

(1) What specific regulations will Romney eliminate to "free up" the oil companies to make them happier?

(2) Will elimination of those regulations have a negative effect on anyone? If not, why were they originally put in place?

(3) Why would any oil company increase production if it would increase supplies? Because increasing supplies in a steady-state demand environment would reduce the price they command for oil sales.
It has always been in the interest of oil companies to restrict production--that is exactly why they do not pump oil on all the leaseholdings they own.
OP
H

lovemymutts said:
Myth, Please by all means,give some FACTUAL examples of what Romney's plan is.
Click to expand...

I really understand how Obama supporters LOVE huge complex, grandiose plans that when it comes down to "EXECUTING" most have NO experience.
Hence Obamacare 2,700 pages, 13,000 new rules regulations and $1 trillion MORE expensive then planned. BUT none of Obama administration MUCH less Obama HAD ever EXECUTED a plan they come up with! They want others to and when others like the EXPERTS like actuaries that state insurance premiums will increase 122%
FACT:President Obama&rsquo;s claim that insurance premiums &lsquo;will go down&rsquo; - The Washington Post
A nationwide study conducted by Milliman Inc. for the Society of Actuaries found that nationwide the premiums
in the individual market would increase from 8 to 37 percent in 2014  with a cumulative increase of as much
as 122 percent between 2013 and 2017.

BUT Obama et.al. including YOU evidently NEVER considered some of the ramifications THAT Actuaries have to consider!

SO Romney keeps it simple STUPID!
Simple plans can be executed in smaller chunks meaning you can get things done... like JOBS!

So here is ONE of the FIVE simple Executive Orders the FIRST DAY Romney would sign.... FIRST DAY FIVE OrDERS!!!

See you WON"T go to the web site to read it here is the third EXECUTIVE ORDER to be signed on the FIRST DAY!!!

" the first day he will sign order to Boost Domestic energy Production Directs the Department of the Interior to implement a process for rapid
issuance of drilling permits to developers with established safety records seeking to use pre-approved techniques in pre-approved areas."

So IF the process of rapidly issuing drilling permits is done:
Instead of
Obama 11% decrease in leases
In 2008 under President Bush, there were a total of 55,085 oil and gas leases in effect on federal land.
In 2011 under Obama, there were just 49,174, a decrease of 11 percent.


ALL Romney needs is sign this order and 100 million barrels will be restored to what they WERE in 2010!

Finally look at this chart and YOU TELL ME why OIL production is DOWN on Federal LANDS!
Tell me WHY we don't have more JOBS specifically in Oil when in :

in 2005 it took oil operators 115 Average number of days after initial submission that industry takes to resolve any deficiencies in an APD
BUT IN 011 it takes 236 days nearly double WHY?? 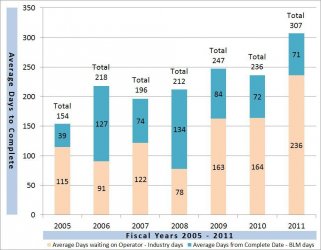 The Truth of Our President

H
Will Biden's moratorium on new oil and gas leases on federal lands cause gas prices to increase?
6 7 8

A Most Disturbing Phenomenon
3 4 5