 Not Fannie Mae, Freddie Mac Or The Community Reinvestment Act

In the four years since the housing bubble burst, triggering a collapse in global financial markets whose value had been propped up through the repackaging and trading of home loans via complex financial instruments, there's been plenty of blame to go around. The Occupy Wall Street protests have called new attention to the root causes of the crisis, and led Republicans to reiterate their claim that government-backed lenders Fannie Mae and Freddie Mac were the primary villains. The facts about the subprime mortgage market prove that claim false: Private firms dominated the subprime market boom of 2004-06, and were not even subject to the 1977 Community Reinvestment Act some Republicans vilify. Thanks to decades of financial deregulation, capped by President Bush's decision to appoint Wall Street regulators who believed their job was to help banks rather than curb banking abuses, financial giants were able to turn the mortgage market into a high-stakes casino. As investigative reporters and Congress' Financial Crisis Inquiry Commission have all shown, it was deregulation mixed with irresponsible and potentially illegal practices by private firms on Wall Street that caused both the bubble and the collapse.

Facts Show Private Lenders Who Were Not Subject To CRA, Not Government-Backed Ones Who Were, Drove The Subprime Mortgage Market

Sen. Graham: "Fannie Mae And Freddie Mac" Were Behind "The Problem That Got Us Into This Mess." On the January 2, 2011, edition of NBC's Meet the Press, Sen. Lindsey Graham (R-SC) said: "[T]he financial regulation bill really left unattended Fannie Mae and Freddie Mac, and when you have government entities this large who own this much of housing, who've been pushing mortgages on people who couldn't afford to pay them, and you do nothing about it, it's pretty hard for me to say you've reformed the problem that got us into this mess. [...] To me, [the solution] is to get Fannie Mae and Freddie Mac in a, in a more privatized environment where risk/reward is, is, is more traditionally accepted. That--the American dream is to own a home you can afford. And to look at these entities and get more private-sector involvement and control who they lend money to and basically wind them down and make them more private." [Meet the Press, 1/2/11]

Sen. DeMint: "Liberal Housing Goals...Fueled The Housing Crisis." From Sen. Jim DeMint's (R-SC) blog: "Senator McCain has offered an amendment that would repeal their liberal housing goals that encouraged more risky lending and fueled the housing crisis, as well as end their dominance of the mortgage market and let the private sector back in. While more needs to be done to quickly end the permanent bailout of these mortgage giants, the McCain amendment is an important first step. True financial reform must include Freddie Mac and Fannie Mae. Congress cannot pretend to have ended 'too big to fail' without ending these out of control institutions." [DeMint.Senate.gov, 5/11/10]

2007: The Collapse Of The Housing Bubble And Widespread Defaults On Subprime Loans Triggered A Banking Crisis That Led To A Massive Recession. From Slate: "The only near consensus is on the question of what triggered the not-quite-a-depression. In 2007, the housing bubble burst, leading to a high rate of defaults on subprime mortgages. Exposure to bad mortgages doomed Bear Stearns in March 2008, then led to a banking crisis that fall. A global recession became inevitable once the government decided not to rescue Lehman Bros. from default in September 2008. Lehman's was the biggest bankruptcy in history, and it led promptly to a powerful economic contraction. Somewhere around here, agreement ends." [Slate, 1/9/10, emphasis added]

From 2004 To 2006, Fannie And Freddie's Share Of Subprime Market Fell From Almost Half To Just Under One-Quarter. As reported by McClatchy: "But these loans, and those to low- and moderate-income families represent a small portion of overall lending. And at the height of the housing boom in 2005 and 2006, Republicans and their party's standard bearer, President Bush, didn't criticize any sort of lending, frequently boasting that they were presiding over the highest-ever rates of U.S. homeownership. Between 2004 and 2006, when subprime lending was exploding, Fannie and Freddie went from holding a high of 48 percent of the subprime loans that were sold into the secondary market to holding about 24 percent, according to data from Inside Mortgage Finance, a specialty publication." [McClatchy, 10/12/08, emphasis added]

Fannie And Freddie Faced Tougher Regulatory Standards Than The Private Firms. As reported by McClatchy: "One reason is that Fannie and Freddie were subject to tougher standards than many of the unregulated players in the private sector who weakened lending standards, most of whom have gone bankrupt or are now in deep trouble." [McClatchy, 10/12/08]

2006: Private Firms Issued About Six Out Of Every Seven Subprime Mortgages. As reported by McClatchy:

Federal Reserve Board data show that:

More than 84 percent of the subprime mortgages in 2006 were issued by private lending institutions.
Private firms made nearly 83 percent of the subprime loans to low- and moderate-income borrowers that year.
Only one of the top 25 subprime lenders in 2006 was directly subject to the housing law that's being lambasted by conservative critics. [McClatchy, 10/12/08, emphasis added]

2008: The 15 Largest Subprime Servicers Were All Private Companies, Despite Large Drops In The Volume Of Their Subprime Business Compared To 2007. McClatchy prepared a graphic based on Inside Mortgage Finance data showing the 15 largest subprime service companies in 2008: 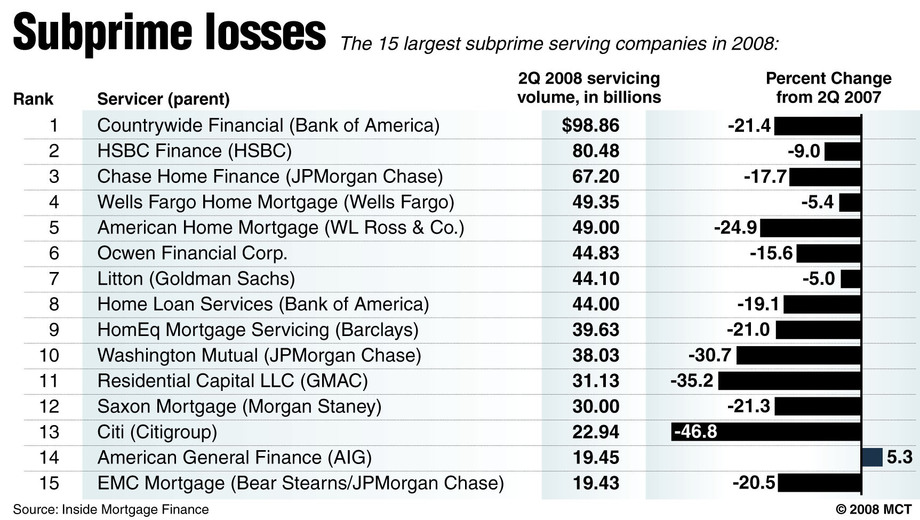 Real Class War Is Working to Keep Those Below You Down

Banks should never be forced to give subprime loans.
2 3 4

Even A Blind Squirrel….
2

When Democrats fuck up, they end up moving up. Andrew Cuomo and the 2007 housing debacle.

Congressman Calls On Biden To Undergo a Cognitive Test
2

Another Random Act of White Supremacy in NYC

There is no controversy over Babbett
6 7 8

Before Trump, Nobody Knew What Juneteenth Was

A moment ago
Augustine_