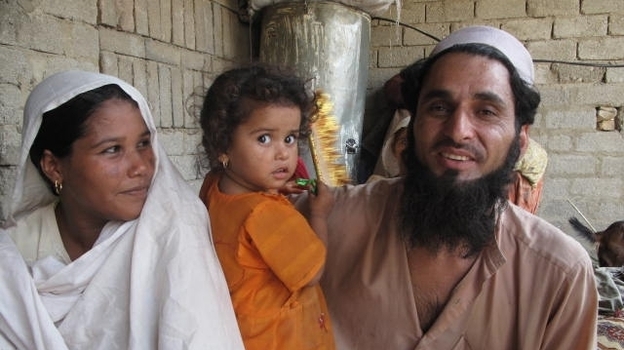 In Pakistan, family planning is an uncomfortable topic fraught with religious overtones.

But in one of Asia's fastest-growing populations, a story of women giving birth challenges stereotypes, including what Islam has to say about women's health and family planning.

According to a new government survey, Pakistan is producing nearly 4 million babies every year, and most are born into poverty. The World Bank says 60 percent of Pakistanis live on less than $2 a day.

Yet clerics in religiously conservative Pakistan tell the Muslim majority that the Quran instructs women to keep bearing as many babies as possible. The message from the mullahs is that contraception is generally haram, or a sin.

According to a new government survey, Pakistan is producing nearly 4 million babies every year, and most are born into poverty.

"Family planning is wrong and un-Islamic if it is practiced routinely," he says. "If it permanently stops a woman from becoming pregnant, it is harmful and illegal."

But a woman can temporarily put off becoming pregnant. The mufti says the Quran encourages mothers to space their pregnancies and to breast-feed their babies for prolonged periods. One verse states: "Mothers shall nurse their children two complete years for whoever desires to complete the nursing term."

If a new pregnancy would interfere with breast-feeding and the health of a nursing child, Islam allows a woman to temporarily stop having babies. The mufti says during that period Islam can be interpreted to mean the man may also use condoms and the rhythm method.

Zakaria says being poor should in no way limit having babies. Referencing the Quran, he says, "God will provide the resources and no one will starve."

"There are clear instructions in the Holy Quran, in which Allah says, 'We give you food, and we will also give food to your children. Food is not your responsibility, but God's,' " he says.


Educated mothers limit their families. There's no problem. The tragedy in our country has been that the majority of women in Pakistan are not educated.

The mufti says the Quran also instructs that children must not be deprived of a proper upbringing. However, in Pakistan 38 percent of all children under 5 are underweight, and according to government data, malnutrition is widespread among mothers. The lack of resources in Pakistan today invites the question whether the mufti and his teachings are not consigning millions of people to misery.

The mufti answers: "Every society has its own value system. You should not judge us by yours. Children in the West lead a luxurious life. Earth is their heaven. Our children should not be compared with them," the mufti says. "Muslims don't pay much heed to the mundane pleasures of this world. Our reward will come in the next life."

The mufti adds that the West has taken modern contraception too far by removing the fear of getting pregnant and therefore removing women's sexual inhibitions. In Pakistan, "if a woman's fear is removed," says the mufti, she will stray into bad behavior "and offend God."

A 'Tragedy': Lack Of Education

Seventy percent of married women in Pakistan, according to the government, use no birth control method at all. And the government is ineffectual in promoting family planning, says Dr. Yasmin Raashid, a leader in obstetrics and gynecology in Pakistan. But she says if properly followed, the Quran's teachings about spacing pregnancies would automatically mean smaller families.

Dr. Yasmin Raashid, chief physician at Lahore's United Christian Hospital and the second of three generations of OB/GYN doctors, says family planning is virtually nonexistent in Pakistan, where the population is rapidly growing.

"And [ages] 20 to 30, of course, is the safest time to produce children," she says. "If you look at it, then, if you have a spacing between of let's say four years or three years between each child, they would not be producing more than three or four children."

Raashid says more than anything else illiteracy undermines family planning in Pakistan.

"Educated mothers limit their families. There's no problem," she says. "The tragedy in our country has been that the majority of women in Pakistan are not educated."

Raashid says educating young girls is the single best policy for reducing the country's high fertility rate and for achieving smaller, healthier families. She sites Sri Lanka where the literacy rate is 91 percent. There the fertility rate  or the average number of children a woman has in her lifetime  is 2.3, compared with Pakistan, where it is 3.9. In Pakistan, infant mortality is nearly six times as high as in Sri Lanka  a smaller, poorer country.
Click to expand...

In Pakistan, Birth Control And Religion Clash : NPR
You must log in or register to reply here.

Are the Chinese Nervous too? President Delays Retirement of Prominent Banker

By Every Benchmark, The World Feminism Created Is The Opposite Of What Makes Women Happy
3 4 5

M
Crisis Pregnancy Centers: Debunking the Myth that Pro-Lifers Only Care Up Until Birth

A moment ago
Pellinore