How Did the Ancients Know About Dinosaurs?

Moonglow said:
Evidently there were dragons in every society also.
Click to expand...

Yes, and how did Civilizations that never interacted come up with the same creature?
Click to expand...

The same way many of them developed pyramid shaped buildings with no interaction of the societies over the Earth.
Click to expand...

Uh,no, stumbling on the building functions of basic shapes is NOT the same as finding out about creatures who presumably died out long before man existed.
Click to expand...

Your response is not appropriate, though. The topic was dragons being invented by many difgerent cultures. And yes, the building block analogy holds quite well, iin that case. Add to that the fact that "dragons" (really a generic word for an entire menagerie of different looking creatures with different names) are ALWAYS "magical", ans it is quite easy to understand how different cultures invented similar nonsense. Peolle simply have a tendency to invent and believe utter nonsense. In the abject ignorance of the iron age and the bronze age, that was very prevalent.

I see something verry wrong with the image of the Tyrannosaurus Rex.

The front two arms are too small to have any viable function. They are too short to reach its mouth or scratch an itch on its knees. The only thing I can think of that explains this discrepancy is the original find, they found a pregnant Trex with its unborn baby inside. 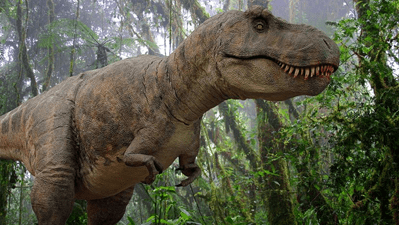 Weatherman2020 said:
A few years ago I went into a 13th century Church in Estonia. Inside were mid 17th century paintings of various Bible scenes. I stopped in my tracks when I saw this painting from the Book of Job. It wasn't the Renaissance clothing everyone was wearing but what was behind them. The painting was hanging there a century before the first dinosaur fossils were even discovered yet they showed Job 40 perfectly with Brontosaurus’s.

How did they know?

“Look at Behemoth,which I made along with you and which feeds on grass like an ox.
What strength it has in its loins, what power in the muscles of its belly!
Its tail sways like a cedar; the sinews of its thighs are close-knit.
Its bones are tubes of bronze, its limbs like rods of iron.
It ranks first among the works of God, yet its Maker can approach it with his sword.
The hills bring it their produce, and all the wild animals play nearby.
Under the lotus plants it lies, hidden among the reeds in the marsh.
The lotuses conceal it in their shadow; the poplars by the stream surround it.
A raging river does not alarm it; it is secure, though the Jordan should surge against its mouth.
Can anyone capture it by the eyes, or trap it and pierce its nose?
Job 40:15-24

While in Cambodia I made sure to visit a temple that was built around 1100 AD. How’d they know what a Stegosaurus looked like?
Click to expand...

You actually think no one ever stumbled upon dinosaur fossils prior to the 16th century? Lol...
Click to expand...

The first dinosaur was discovered in 1848, so the answer to your question is a resounding NO
You must log in or register to reply here.

The power to propel us to the stars

Chernobyl--The Cover-up and the Indifference Continue On

Existence of Dinosaurs Was First Made in Late 1800's

Can the U.S. learn from demonstrably superior health care systems?

M
Can you still sin and go to heaven after praying for forgiveness?