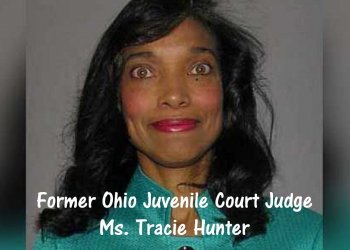 Not too long ago I clicked on a video memorializing former Judge Tracie Hunter being forcibly dragged from a courtroom after she was sentenced to six months in jail and community service for 'unlawful interest in a public contract', a felony.

Watching the video I said to myself, "Is Tracie Hunter acting in manner consistent with a strong, dignified, highly educated American woman?"

VIDEO: Chaos in the courtroom as former judge Tracie Hunter sentenced to 6 months in jail

A few weeks later I clicked on this Facebook video depicting Tracie Hunter loudly contesting her conviction, declaring herself innocent of the felony she was convicted of. During her fourteen minute public appeal Ms. Hunter made allegations of corruption against people running the Cincinnati CJS.

Frankly, for all I know Ms. Hunter could be correct.


However, at this time I'm not concerned about Ms. Hunter or the Cincinnati CJS.

I am referring to a Culture of Systemic and Generational CHILD ABUSE that THROUGH NO FAULT OF THEIR OWN, deprived Tupac and Kendrick, their childhood friends, as well as many of their elementary and JHS classmates from experiencing a SAFE, fairly or wonderfully happy American kid childhood.

Sadly, the traumatic, potentially life-scarring Criminal Child Abuse and Emotional Abandonment each of these men speaks about experiencing during a critical period of human/childhood development, resulted with them maturing into emotionally ill adults revealing in public they’ve been experiencing acute depression as well as Suic*dal Thoughts for most of their lives.

The same Culture of African American Child Abuse, Neglect and Maltreatment that for near 40 years has been inspiring significant numbers of popular urban story-TRUTH-tellers to compose and promote American music art HATEFULLY informing our world that American girls, women and MOTHERS of African descent should be viewed as less than human *itches, *hores, 'hoes' or "THOTS" unworthy of being treated with basic human respect. (THOT = "That Hoe Over There")

Unfortunately, it's plainly evident Kendrick, Tupac as well as untold numbers of American children are being raised, nurtured and socialized by moms experiencing some type of illness preventing and impeding them from embracing and following their innate, natural maternal instinct to protect their child or children from harm.

Perhaps I'm wrong but *something* is preventing significant numbers of black or American moms of African descent from recognizing that placing ABOVE ALL ELSE the emotional well being of our Nation's most precious and cherished assets, will most likely result with a fairly or wonderfully happy child maturing into a reasonably responsible teen and adult citizen caring about their own well being (*May 18, 2015 - Rise in Suic!de by Black Children Surprises Researchers - The New York Times*), as well as embracing compassion, empathy and respect for their peaceful or less fortunate neighbors.


In closing, I have two questions for Ms. Tracie Hunter. The same question I ask every one of my peaceful, free-thinking, reasonable well adjusted American and foreign born neighbors... 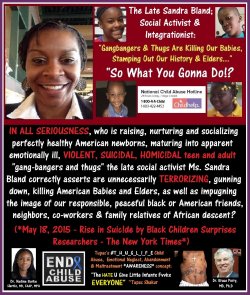 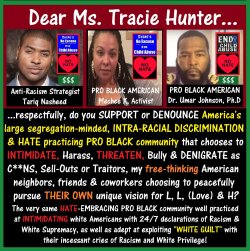 Why Did Democrats Kill the Amendment to Have Joe’s New IRS Auditors Only Audit the Rich?
2 3 4

Has Joe Hires 87,000 More IRS Auditors, Poor Are Audited at 5X the Rate of Everyone Else