First-Ever photograph of light behaving as particle and wave at SAME TIME!

" (Phys.org)—Light behaves both as a particle and as a wave. Since the days of Einstein, scientists have been trying to directly observe both of these aspects of light at the same time. Now, scientists at EPFL have succeeded in capturing the first-ever snapshot of this dual behavior.

Quantum mechanics tells us that light can behave simultaneously as a particle or a wave. However, there has never been an experiment able to capture both natures of light at the same time; the closest we have come is seeing either wave or particle, but always at different times. Taking a radically different experimental approach, EPFL scientists have now been able to take the first ever snapshot of light behaving both as a wave and as a particle. The breakthrough work is published in Nature Communications.

..."This experiment demonstrates that, for the first time ever, we can film quantum mechanics – and its paradoxical nature – directly," says Fabrizio Carbone. In addition, the importance of this pioneering work can extend beyond fundamental science and to future technologies. As Carbone explains: "Being able to image and control quantum phenomena at the nanometer scale like this opens up a new route towards quantum computing."" 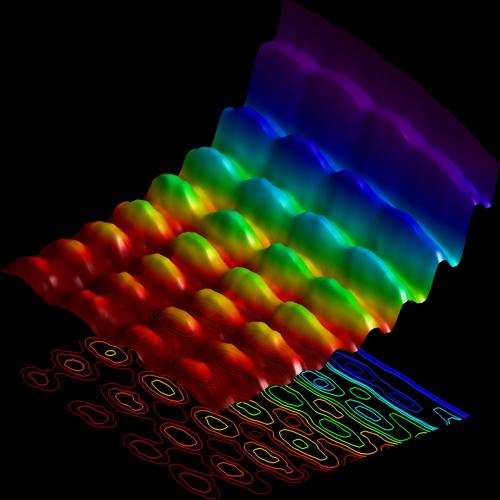 Mysterious 'Bump' Baffles Fermilab Scientists Probing How World Works
May 11, 2016 — It can't be seen with the naked eye, and it requires the power of the world's largest and most complex machine to find it. Yet it could change the very understanding of the known world of particle physics. Right now, though, it's simply a "bump."

"In particle physics, a bump is when you have a smooth data curve — which is what you expect — and you see a little excess, a little bump in the middle of it, and that often is indicative that you may have made a discovery of some kind," said scientist Don Lincoln. He's one of hundreds of scientists and researchers at Fermilab in suburban Chicago reviewing the data produced by experiments at the European Organization for Nuclear Research, or CERN, facility in Switzerland, which is home to the world's most powerful particle accelerator, the Large Hadron Collider, also known as the LHC. "Since about 1964," Lincoln explained, "we have invented a series of theories that, blended together, is called the Standard Model of Particle Physics and from that we can explain all data that we've taken. However, we can't explain this bump." 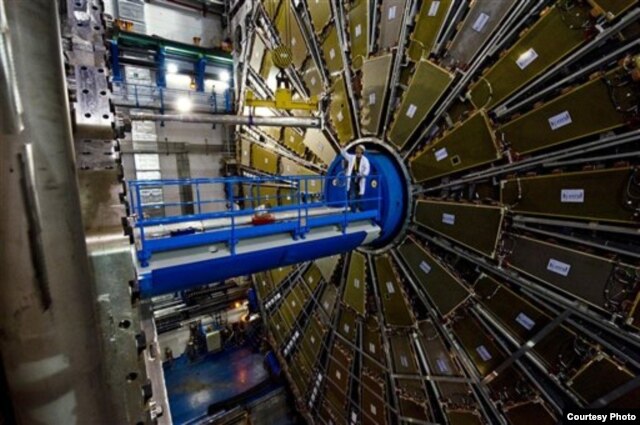 A $5.5 billion atom smasher, called the Large Hadron Collider, is housed at the CERN particle physics lab in Geneva, Switzerland​
Which means this "bump" could represent a new particle previously unknown to scientists, and could fundamentally change understanding of particle physics. "If it is real, it's probably the biggest discovery of the last half century," Lincoln said. Then again, he adds, maybe it isn't. "It could be a discovery, or it could go away. It's in that sort of gray area," he added.

Fermilab, where Lincoln and other scientists sort through that gray area, is the home of the Tevatron accelerator, once the largest superconducting supercollider in the world. Though the Tevatron accelerator has been taken offline, and has been eclipsed by CERN's LHC, Fermilab remains at the forefront of particle physics. "We bring a certain amount of technology, know-how, to their machine because we started with a superconducting machine. So we have viable knowledge to bring to the table," said Fermilab's director, Nigel Lockyer.

Although the United States is one of the largest national collaborators for experiments conducted with the LHC in Switzerland, Lockyer noted that particle physics is now a more global exercise. "We're into a new era of relationship between CERN and Fermilab, or between the United States and Europe, intertwining our particle physics programs," he said. What helps the interaction are technological advances and global cooperation that allow scientists at Fermilab to remotely monitor and analyze data produced by the LHC's particle collisions some 7,000 kilometers away.

Plenty of Wiggle Room in Scientific Certainty-Fact or Fiction?

GOP stance on Net Neutrality is a losing position

Considering all the lies by the democrats and MSM in 2020, is Joe Biden's presidency legitimate? (Poll)
2

The war with the Police... Going too far (13 year old shooting)

Why Washington Is the Best State in America
3 4 5

A moment ago
Camp
C

How Many Times Will The Democrats Pack The Courts? How Many Judges Are Enough?

Hunter Biden Got $2M for Autobiography. It Sold 11,000 Copies

Why do you lean politically the way you do?
2