TCPalm.com, Aug 11, 2017 (emphasis added): More military ordnance found Friday on Hutchinson Island — Officials with the U.S. Air Force and St. Lucie County Sheriff’s Office worked Friday afternoon at a site where five World War II-era military flares have been discovered in the past two days. Shortly after 3 p.m. Friday, a loud boom or explosion erupted, and a large cloud of white smoke rose over the area… two more were turned up by construction crews in the same area where the first three were found… Air Force officials from Patrick Air Force Base were called in case several more turned up and because of the military nature of the items… The site, south of Florida Power & Light Co.’s St. Lucie Nuclear Plant, is largely hidden from view… Chrissy Cuttita, spokeswoman at Patrick Air Force Base, said she couldn’t provide any information until the explosive ordnance disposal team returns… 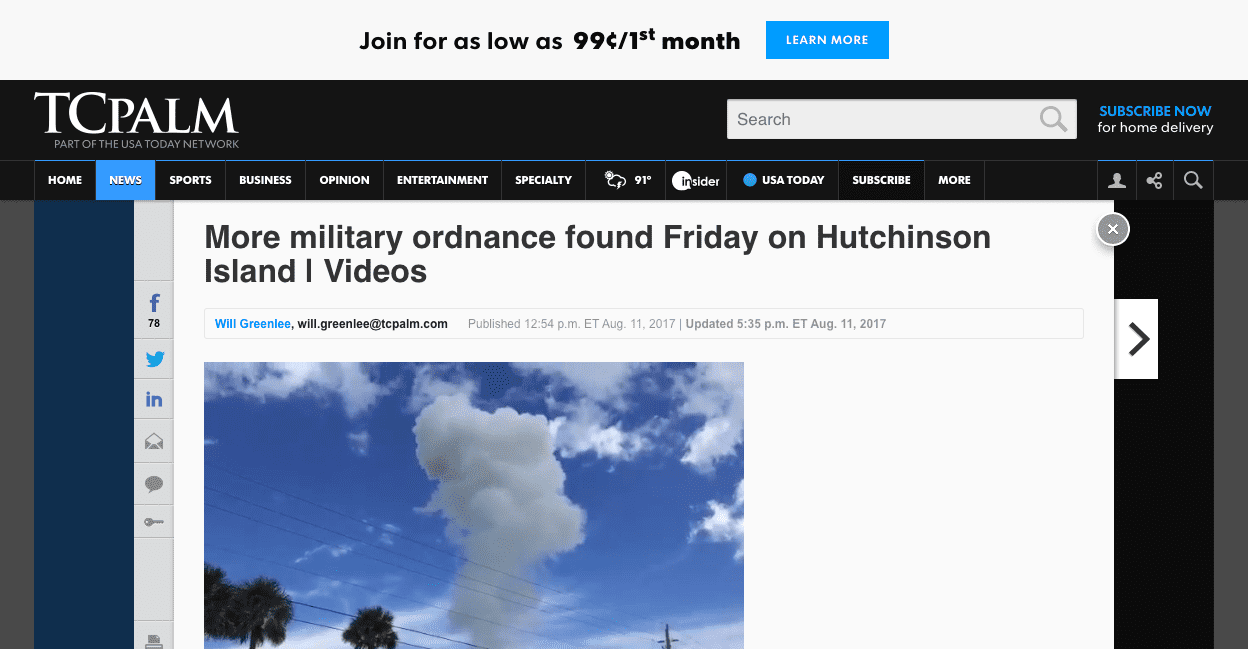 Click the link provided by the site and you can get TCPALM over there.

this seems to of happened a few days ago .

So, what is this? Some jihadi rogue military used bombs he was supposed to explode on the power plant?

Or did they build something on a former bombing range?
W

I don't know for sure but my gut instinct tells me it's Antifa or some similar leftist group, as opposed to muslims. An Antifa monster who wants to "punish" red states by causing countless thousands of deaths in one.

Marion Morrison said:
So, what is this? Some jihadi rogue military used bombs he was supposed to explode on the power plant?

Or did they build something on a former bombing range?
Click to expand...

According to the article this is old WWII ordinance. The article also says this could be from a training and/or disposal site in the past.

"Aug 11, 2017: [D]eputies say this could be a disposal site dating back to World War II. Andy Brady at the Fort Pierce National Navy UDT SEAL Museum says these beaches are where the Navy’s special warfare was invented… “Backed off the last several years, but years ago people would find landmines, hand grenades, bullets, all kinds of training devices,” said Brady. He says more of these ordnances could be found in the future…"
You must log in or register to reply here.

Putin shows us how its done.

Science can flourish only in an atmosphere of free speech