A new case of an American with ebola being flown back to the US.

OK, I want to hear a new chorus, four part harmony, of 'Oh, woe is me, we are all going to die' from out fruitloop rightwingnut brigade. They did it so beuatifully last time. Come on, guys and gals, I know you won't dissappoint us.

Must be an illegal alien.

Obama is trying to kill us all

It's no big deal since it's not an election year...No Fox News anchors will need to jump on the couch and scream terror..

Old Rocks said:
A new case of an American with ebola being flown back to the US.

OK, I want to hear a new chorus, four part harmony, of 'Oh, woe is me, we are all going to die' from out fruitloop rightwingnut brigade. They did it so beuatifully last time. Come on, guys and gals, I know you won't dissappoint us.
Click to expand...

This time there isn't an election coming up.
W

Almost $2B in pledges not honored yet...

The remaining $3.9 billion pledged has been difficult to track because of "scant information" and a lack of transparency, the group said. "We're finding it hard to understand which donors have given what money, to whom and for what purpose," said Aboubacry Tall, Oxfam's regional director for West Africa. Oxfam called on donors and the governments of Sierra Leone, Liberia and Guinea — the three hardest-hit countries — to provide detailed information on how aid is being provided.

Relatives weep as they bury a loved one suspected of dying from the Ebola virus at a new graveyard on the outskirts of Monrovia, Liberia. Activists say international donors have failed to deliver promised funds to help West African countries recover from the Ebola epidemic that killed more than 11,000 people. Oxfam said Sunday, Jan. 31, 2016, that $1.9 billion has not been delivered.​
More than $5 billion was pledged by the international community as part of a special International Ebola Recovery Conference in New York last July. At least $1.9 billion of that "still has not been allocated to a specific country in a pledge statement let alone through more firm commitments to specific recovery programs." Originating in Guinea more than two years ago, the Ebola outbreak left some 23,000 children without at least one of their parents or caregivers, while some 17,000 survivors are trying to resume their lives despite battling mysterious, lingering side effects.

The international community already has been criticized for how it handled the crisis. An Associated Press investigation found the World Health Organization delayed declaring an international emergency for political and economic reasons. Emails, documents and interviews obtained by the AP show the World Health Organization and other responders failed to organize a strong response. None of the senior leaders involved in directing the Ebola response has been disciplined or fired.

Health workers carry a body of a person that they suspected died form the Ebola virus at a new graveyard on the outskirts of Monrovia, Liberia. Activists say international donors have failed to deliver promised funds to help West African countries recover from the Ebola epidemic that killed more than 11,000 people. Oxfam said Sunday, Jan. 31, 2016, that $1.9 billion has not been delivered.​
Meanwhile, the disease has not been stamped out entirely. Though the WHO declared an end to virus transmission throughout the region on Jan. 14, the next day officials in Sierra Leone reported a new fatality and a second person has since tested positive. WHO said it had anticipated there would still be flare-ups before Ebola was truly over. However, Oxfam said the slow response to recent flare-ups in both Sierra Leone and Liberia show they are still not able to deal effectively with new cases.

WHO: Ebola no longer world health emergency
Mar 29,`16 -- The World Health Organization said Tuesday that the Ebola outbreak in West Africa no longer qualifies as an international health emergency, although it cautioned that male survivors can infect their sexual partners for up to a year after recovering.

The decision by WHO's Ebola emergency committee comes following flare-ups that emerged in Guinea, Liberia and Sierra Leone after authorities declared virus transmission over. The new cases sometimes were publicized only hours after the public announcements were made. "Complacency at this stage would be completely wrong," said Robert Steffen, the committee's vice chair.

The announcement puts an end to the international emergency declaration that has been controversial. An Associated Press investigation found that WHO initially delayed making the declaration - similar to an SOS signal - on political, economic and religious grounds. Tuesday's announcement also comes as the organization fights the Zika virus that has prompted concern in the Americas. Steffen said the battle against Zika in no way dictated the committee's decision to declare the Ebola emergency over.

Health workers prepare to collect the ashes of people that died due to the Ebola virus at a crematorium on the outskirts of Monrovia, Liberia. As Liberia marks the second anniversary Wednesday of its first confirmed Ebola cases, many neighbors say they want to see the crematorium torn down so they can try to forget that terrible time​
While there have been flare-ups of new cases, health authorities said Tuesday those were not linked to the original chains of transmission dating back to December 2013. "We know that little clusters will continue to flare up. That will be normal life just as in previous decades, there have been every now and then, outbreaks of Ebola in various parts of sub-Saharan Africa," Steffen said.

More than 11,000 people have died mostly in Guinea, Liberia and Sierra Leone since December 2013. There are currently no known cases in Liberia or Sierra Leone, though Guinea recently reported two confirmed and three probable cases. Authorities are now monitoring nearly 1,000 contacts of the sick.

Still a year away...

Successful Ebola vaccine will be fast-tracked for use
Fri, 23 Dec 2016 - A high effective vaccine that protects against deadly Ebola virus could be available by 2018.

Trials conducted in Guinea, one of the West African countries most affected by an outbreak of Ebola that ended this year, show it offers 100% protection. The vaccine is now being fast-tracked for regulatory approval. Manufacturer Merck has made 300,000 doses of the rVSV-ZEBOV vaccine available for use should Ebola strike. GAVI, the global vaccine alliance, provided $5m for the stockpile.

Results, published in The Lancet medical journal, show of nearly 6,000 people receiving the vaccine, all were free of the virus 10 days later. In a group of the same size not vaccinated, 23 later developed Ebola. Only one person who was vaccinated had a serious side effect that the researchers think was caused by the jab. This was a very high temperature and the patient recovered fully. It is not known how well the vaccine might work in children since this was not tested in the trial. 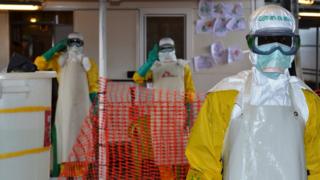 Ebola has been around for 40 years now. But it wasn't until the height of the 2014 outbreak in West Africa that the world decided to invest some serious money into finding treatments and cures. I watched as families of those who had become infected were isolated in their homes. Often entire neighbourhoods were quarantined behind orange fencing. That was their best chance of not becoming infected and infecting others. But as hundreds of people continued to die, and cases started being exported to Europe and the US - the world decided to act. Now, two years later, we have a vaccine. It usually takes around 10 years.

There were some mild side effects reported in this trial, and the vaccine is only known to protect against one of the strains of Ebola, but it is the most deadly Zaire strain. Today's news is a very welcome and much needed breakthrough. However, as the WHO points out, more lives would be saved if countries invested in vaccines before outbreaks, rather during them. The director of British-based medical research institute the Wellcome Trust described the findings as "remarkable". "Had a vaccine been available earlier in the Ebola epidemic, thousands of lives might have been saved," Jeremy Farrar said. "We have to get ahead of the curve and make promising diagnostics, drugs and vaccines for diseases we know could be a threat in the future."

Park him in an immigrant neighnorhood and let nature take its course.
You must log in or register to reply here.

If Communist China invades Taiwan -- what happens after that?

Is this another reason the FBI hid the Hunter Biden Laptop?
5 6 7

A CNN reporter went to two different qAnon events. Here's what he found
4 5 6

cop says Taylor/Floyd/etc --nothing to do with race