Complications of the War in South Sudan

Amid increasing regional and international sense of cautious contempt and optimism of ending the ongoing crisis in the Republic of South Sudan at the backdrop of IGAD troika Sudan, Ethiopia and Kenya successful attempts to start the thorny negotiations between the Government and opposition in Addis Ababa, fears of failure of these efforts remain high.

The success of IGAD took place after the extraordinary summit of the regional gathering in Kenya on 27th of December where the summit called upon parties in South Sudan to immediate cessation of hostilities and to start unconditional political dialogue, while IGAD urged regional and international community to address the deteriorating humanitarian situation.

However, continuation of the fighting and expansion of the geographical area of military confrontations plus other dangerous complications on the ground have increased fears and concerns of the prospects of peace in South Sudan and also raised concerns over the social harmony and peaceful coexistence in South Sudan especially between parties of the ongoing fighting.

Being aware of the significance of the tribal factor in forming and directing the current developments in the newest country on the planet, fears of escalation of ethnic tensions remain logical.

The most salient of those new threats and fears was the content of media and intelligence reports indicating involvement of African mercenaries and foreign negative forces in the ongoing hostilities; they include the Uganda-backed M23 and Sudanese rebel and insurgent groups namely Justice and Equality Movement and Darfur rebels.

Bearing in mind ethnic dimensions the current wave of the civil war in South Sudan is acquiring at the backdrop of the fact that the bulk of Government troops fighting beside president Salva Kiir are Denka , the biggest tribe, while the bulk of his military opponents are Nuer , the second largest tribe in South Sudan; this fact add to the gravity and complexity of the situation in South Sudan.

Therefore, the involvement of these mercenaries and negative forces in the ethnic violence will only add salt to the injury and lead to more unnecessary complications that threaten chances of IGAD troika to realize peace, including social peace and societal harmony, there. This point shall gain further attention if we always remember that theses African mercenary groups were established and remain functional on ethnic lines; M23 represent Tutsi, JEM represents Sudanese Zaghawa tribes while Darfur rebels represent Fur ethnicities.

In line with that, media reports on the involvement of these mercenary groups in racial and ethnic atrocities in South Sudan have a strong ground given the common history these mercenaries have. M23, for example, was accused of grave human right violations in North Kivu province in the DRC. On the other hand, JEM and other Sudanese rebels committed series of such violations including mass killings of their own affiliates based on ethic lines.

The involvement of Sudanese mercenaries in the civil-ethnic conflict has also raised astonishment of many observers who expected them, logically,to fight beside the opposition rather than aliening with President Salva Kiir. This perception, however, neglects the Ugandan role in the ongoing conflict on one hand and the pushy nature of these mercenaries on the other. Reports indicate that it was the Ugandan regime who directed Sudanese mercenaries to fight beside President Kiir.

It is important to note that key and senior leaders of Sudanese negative forces and rebels are resident in Kampala where they enjoy full and evident support from the Ugandan Authority. These directives were synchronous with Kampalas military intervention in South Sudan by sending a brigade besides aerial attacks on the rebels. Additionally, it was Kampala who issued the directives and facilitation to deploy M23 in the battlefields in South Sudan.

Recent history of the Sudanese mercenaries tells about itself. The majority of them played similar roles in Libya and in Chad, where in both cases they were accused of grave human right violations.

The Ugandan intervention was not limited to the militarily side; direct deployment or by using these mercenaries as proxies; but was demonstrated in other political forms and manifestations. President Mosevini, during his visit to Juba on the eve of IGAD summit, sent threatening messages to the opponents of Kiir of imminent military defeat if they reject IGAD initiative. Taking into account the fact that Uganda is not a member of IGAD troika, observers raised concerns that such Ugandan intervention will leave negative impacts on IGAD peace efforts, on one hand, and on stability of South Sudan on the other hand.

Three weeks have already passed since the breakout of this civil war in South Sudan, gravity of the humanitarian situation is evident and prospects of peace remain feeble in view of the current trends of the fighting. Regional and international media report stories demonstrating fearful and awful developments in South Sudan. At this juncture, it is high time for the international community to remind both presidents Kiir and Mosevini of the grave violation to the International laws that criminalize usage of mercenaries.
W

UN: Over one million displaced by South Sudan conflict
29 March 2014 ~ More than one million people have been forced from their homes by the ongoing conflict in South Sudan, the UN says.

Of these, 803,200 have been displaced within the country, and another 254,000 have fled to neighbouring countries, according to the latest UN report. It warns that the situation is likely to get worse as the violence continues. Fighting erupted between the forces of President Salva Kiir and troops loyal to his former deputy, Riek Machar, in December. The two sides signed a ceasefire agreement in January, but sporadic fighting has continued. 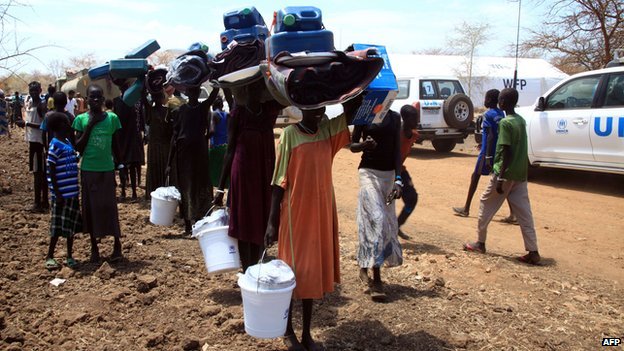 In its report, the UN Office for the Coordination of Humanitarian Affairs (OCHA) said the conflict had caused "a serious deterioration in the food security situation" leaving around 3.7 million people at high risk. "Fighting between government and opposition forces has continued, especially in Jonglei, Unity and Upper Nile state, where towns and rural areas have been ravaged by the violence," it added. The UN estimates that 4.9 million are in need of humanitarian assistance, but it warned that "the remote and dispersed placement sites make it difficult to reach many of South Sudan's conflict-affected people". 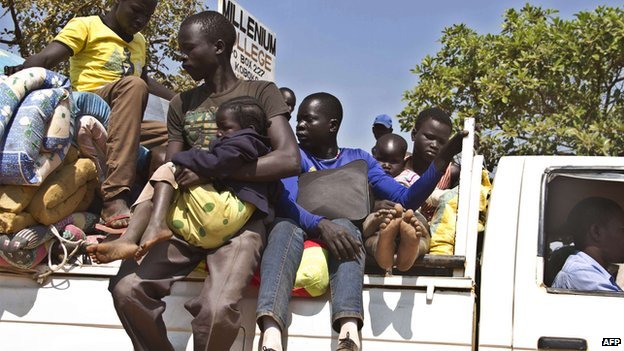 Many also fled to Kenya, Sudan or Uganda, while those in South Sudan are sheltering in UN bases

In its report, the UN says it has received only a quarter of the money it needs to respond to the growing crisis. The violence erupted on 15 December between pro-government forces loyal to President Salva Kiir and soldiers backing Riek Machar, his former vice-president. President Kiir is a member of South Sudan's largest ethnic group, the Dinka, while Mr Machar is from the Nuer community - the country's second largest.

The conflict has seen reports of mass killings along ethnic lines even though both men have prominent supporters in their rival's community. Thousands are feared to have died since the conflict began. Four top South Sudanese politicians have since gone on trial accused of plotting a coup against the government and inciting an insurgency in South Sudan. South Sudan seceded from Sudan in 2011 after a long and bloody conflict, to become the world's newest state.

Are there ANY Trump supporters here who have had enough? ANYONE?
9 10 11