Was it the wonderful economy, everyone getting access to real health insurance, ending the wars in Iran and Afghanistan, and the way he is bringing down the deficit?

It was the biased rightwing MSM always attacking him.

CrusaderFrank said:
Can anyone explain what tanked Obama's polling?

I just knew he was haunting the White House.

I get free health care at the VA.

Look what those big meanies did to the president: 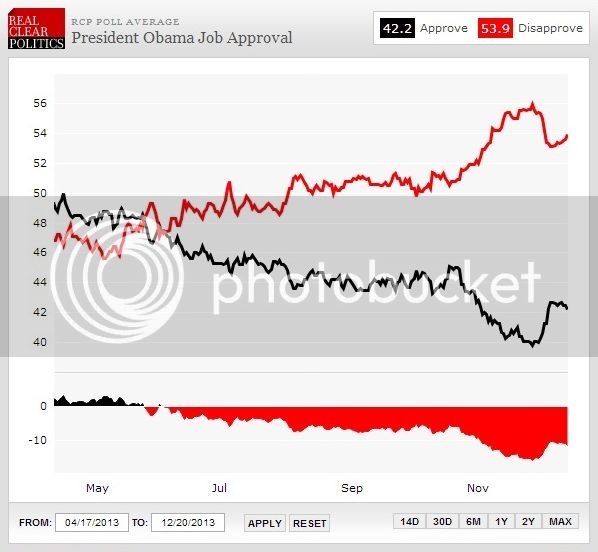 Quantum Windbag said:
Was it the wonderful economy, everyone getting access to real health insurance, ending the wars in Iran and Afghanistan, and the way he is bringing down the deficit?
Click to expand...

Are you including the 5 million that have cancelled insurance in that "everyone"?
When was there war in Iran?
With QE3 total around $1.6 trillion has this been added to the deficit yet??

OP- THE GD WEBSITE- WILL TURN AROUND. The economy will be great until the next phony debt crisis ...Pubs- a disgrace...

I get free health care at the VA.
Click to expand...

I get free health care at the VA.
Click to expand...

I hope you like it and get to keep it period.

The VA takes care of me 100% because of my service to the country.

I thank all of you for taking care of our veterans.

To honestly answer the question I feel Obama did this very much to himself over a long period of time on a variety of issues.

First Obama divided the people, this along shrunk a huge amount of that support he would have had from anyone in the middle and of course right leaning but not necessarily partisan. Obama can't make it through any meaningful length of time talking before he tries and dump all the bad news on Republicans and as time has gone on, Obama blames every single person that does not fully and absolutely agree with him and his policies. So Obama's division was the first problem.

Next was Obamacare, passed without transparency, massive backroom deals and 2k pages that even Obama failed to understand at all.

Next would be Iraq lingering on and on and on and on until when the war finally ended no one really cared that it was over as much as they were wondering why the fuck it took Obama 3 years to do so. While the answer is because it was ended on Bush's timetable, the vast majority of people don't know that, they simply expected a dramatic close to Iraq and it never manifested.

Next would be the expansion of the war on terror and the entering of smaller wars known as "not wars" (coined by John Stewart). Many of the party (voters) were seeing they were now a bigger war party than Bush/Reps, while they might not say it out-loud it disillusioned them none the less on Obama's credibility and of course made them feel as though their vote was not so historic after all, coned from them if anything.

Next would be the string of scandals, overall let downs and and constitutional issues. The TSA to the NSA, expanding the patriot act, the NDA, the second amendment issue, the shutdown, the credit downgrade, the teleprompter President and the list goes on and on and on... even today the list is growing.

Obama's mistake was dividing the country, that is a campaign thing to get your base reved up, create hate, unimaginable hate towards your opposition. The problem is Obama kept this up throughout the last 5 years... If you ever find yourself on an opposing view of Obama you quickly see him for the hate monger he in fact is. The division kept growing but more people found themselves at odds with the president than were for him.

Now it's Obamacare failing on historic proportions. Even when it starts "working" it will run deficits, cost people more and anyone paying will resent those that get it for free... Obama lied to get it passed, then we found the ACA was a lie as a whole, just like on the NAS issue people now don't trust Obama because he has lied to them, and attacked them for not standing with him... the division issue again.

You can't go after guns without pissing off the independents and tens of millions of Democrats... You can't go after abortion without causing the same problem. You can't keep telling people we need to be in perpetual war or you don't support the idea because Obama is our first black President... Obama does this, repeatedly... And again, slowly people that once liked Obama find that when you're on his "try and make people hate these guys" list, they find they are closer to the people they thought they once hated when only viewed through the Obama rhetoric.

None of us want massive deficits or never ending wars... None of us want to be spied on or feel it's good to spy on our enemies. Yet this is what Obama give us, and a whole lot more.
Last edited: Dec 20, 2013

Yes, it's everyone else that caused people to not trust or like Obama... That's it, zero accountability!

Quantum Windbag said:
Was it the wonderful economy, everyone getting access to real health insurance, ending the wars in Iran and Afghanistan, and the way he is bringing down the deficit?
Click to expand...

It was the lies, maobama is so good at lying no one could keep track of them all and OOPS, the truth comes out. People can only stomach so many lies before they puke on the liar.
You must log in or register to reply here.

What happened to the GOP "open tent Party" Autopsy after the last election?

Are We About to See Policie Use LETHAL Force Against Rioters?

BLM Lies INTENTIONALLY to Create DIVISION in our society, Hear it From a Civil Rights Expert