Expressing the sense of Congress that the United States should not engage in the construction of a North American Free Trade Agreement (NAFTA) Superhighway System or enter into a North American Union with Mexico and Canada.

IN THE HOUSE OF REPRESENTATIVES

Mr. GOODE (for himself, Mr. WAMP, Mr. JONES of North Carolina, Mr. PAUL, Mr. STEARNS, Mr. DUNCAN, and Ms. FOXX) submitted the following concurrent resolution; which was referred to the Committee on Transportation and Infrastructure, and in addition to the Committee on Foreign Affairs, for a period to be subsequently determined by the Speaker, in each case for consideration of such provisions as fall within the jurisdiction of the committee concerned

Expressing the sense of Congress that the United States should not engage in the construction of a North American Free Trade Agreement (NAFTA) Superhighway System or enter into a North American Union with Mexico and Canada.

Whereas the United States Departments of State, Commerce, and Homeland Security participated in the formation of the Security and Prosperity Partnership (SPP) on March 23, 2005, representing a tri-lateral agreement between the United States, Canada, and Mexico designed, among other things, to facilitate common regulatory schemes between these countries;

Whereas reports issued by the SPP indicate that it has implemented regulatory changes among the three countries that circumvent United States trade, transportation, homeland security, and border security functions and that the SPP will continue to do so in the future;

Whereas the actions taken by the SPP to coordinate border security by eliminating obstacles to migration between Mexico and the United States actually makes the United States-Mexico border less secure because Mexico is the primary source country of illegal immigrants into the United States;

Whereas according to the Department of Commerce, United States trade deficits with Mexico and Canada have significantly increased since the implementation of the North American Free Trade Agreement (NAFTA);

Whereas the economic and physical security of the United States is impaired by the potential loss of control of its borders attendant to the full operation of NAFTA and the SPP;

Whereas the regulatory and border security changes implemented and proposed by the SPP violate and threaten United States sovereignty;

Whereas a NAFTA Superhighway System from the west coast of Mexico through the United States and into Canada has been suggested as part of a North American Union to facilitate trade between the SPP countries;

Whereas the State of Texas has already begun planning of the Trans-Texas Corridor, a major multi-modal transportation project beginning at the United States-Mexico border, which would serve as an initial section of a NAFTA Superhighway System;

Whereas it could be particularly difficult for Americans to collect insurance from Mexican companies which employ Mexican drivers involved in accidents in the United States, which would likely increase the insurance rates for American drivers;

Whereas a NAFTA Superhighway System would likely include funds from foreign consortiums and be controlled by foreign management, which threatens the sovereignty of the United States:

Now, therefore, be it
Resolved by the House of Representatives (the Senate concurring), That--

(1) the United States should not engage in the construction of a North American Free Trade Agreement (NAFTA) Superhighway System;

(2) the United States should not allow the Security and Prosperity Partnership (SPP) to implement further regulations that would create a North American Union with Mexico and Canada; and

"You can take from A and give to B if B pays more taxes?"
~Justice Antonin Scalia on Kelo v. New London

"We are fast approaching the stage of the ultimate inversion: The stage where the government is free to do anything it pleases, while the citizens may act only by permission  which is the stage of the darkest periods of human history, the stage of rule by brute force." ~Ayn Rand

Medicine is the keystone in the arch of socialism~Lenin
W

Foreign minister: Mexico willing to 'step away from NAFTA'
March 24, 2017 -- Mexican Foreign Minister Luis Videgaray said that if North American Free Trade Agreement negotiations don't benefit all parties involved, the country is willing to "step away" from it.

In an interview with Bloomberg, he said pulling out of NAFTA would be a last resort. "If what is on the table is something that is not good for Mexico, Mexico will step away from NAFTA," Videgaray said. "Both parties have leverage with each other. The questions is: Can you pull your leverage without hurting yourself? Probably not. We're not approaching this in that sense. It should be a constructive process," he added. Videgaray said Mexico's relationship with the United States goes beyond trade; it already affects the politics of Mexico ahead of a presidential election in which NAFTA could be a wedge issue. Mexico will hold presidential elections in 2018. During an interview with Bloomberg, Videgaray said he anticipates negotiations between Mexico, Canada and the United States over NAFTA could begin in the summer.

When asked if negotiations could begin later and spill over into 2018, during Mexico's presidential cycle, and make relations with the United States and trade a key issue, Videgaray said those issues are the reasons the Mexican and U.S. governments must work constructively. "I think that already the U.S. relationship -- the Mexico-U.S. relationship -- is going to be an important part of the political environment in Mexico as we approach an election cycle," Videgaray said. "That's something that goes beyond trade, is the way that Mexico feels about the U.S., and that's why I think it's so important to work constructively, in good faith, work closely toward getting a good understand and a good deal for both sides. He said doing negotiating the agreement well would be a "win-win" for Mexico, Canada and the United States. "It's a clear win-win for both the U.S., Mexico and for Canada, as well, because this is a trilateral deal, and we expect formal negotiations to start at some point during summer," Videgaray said. 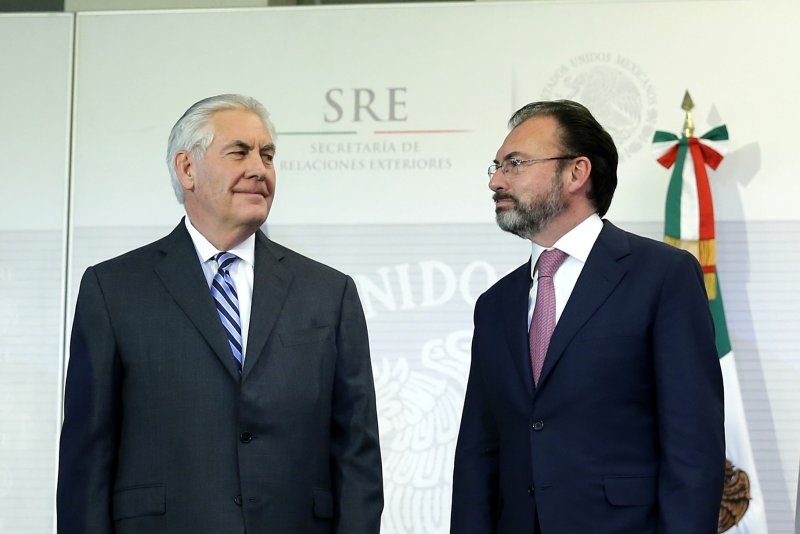 Mexican Foreign Minister Luis Videgaray (R), seen here with U.S. Secretary of State Rex Tillerson (L), was in New York on Saturday to announce the opening of legal defense centers in Mexico's 50 U.S. consulates to help Mexican nationals living in the United States fight deportation. Videgaray said NAFTA can be improved to benefit all three countries involved.​
On renegotiating NAFTA, Videgaray said the Mexican government already has its list of objectives prepared, which, among others, call for the protection of Mexicans in the United States and others issues surrounding security and migration. On trade, Videgaray said the Mexican government's primary goal under President Enrique Peña Nieto is for the "Free Trade Agreement to remain free trade." "Can it be improved? Oh, yeah. For sure. It can be improved. It's a 20-year-old agreement and many things can be done better," Videgaray said. "We've learned a lot over these 20 years and the world has changed, but it's got to remain a free trade agreement, where investments are protected, that investors in Mexico, and the U.S. and Canada are under the rule of law and feel protected, and also, very important, that we include things that didn't exist when NAFTA was created like electronic commerce, or sectors from Mexican economy that [were] complete closed and now after recent reforms have been opened like energy, telecommunications and even the financial sector."

U.S. President Donald Trump vowed to "renegotiate NAFTA or withdraw from the deal under Article 2205" within his first 100 days in office. Trump has repeatedly said NAFTA is a "bad deal" that has harmed Americans while benefiting Mexico and Canada. In 2015, the U.S. Congressional Research Service said NAFTA's effects were neither damaging nor helpful. "In reality, NAFTA did not cause the huge job losses feared by the critics or the large economic gains predicted by supporters," the independent report said. "The net overall effect of NAFTA on the U.S. economy appears to have been relatively modest, primarily because trade with Canada and Mexico accounts for a small percentage of U.S. GDP."

Foreign minister: Mexico willing to 'step away from NAFTA'
Click to expand...

The War on the Home Front

Crime in Utah is Way Up
2

Crime in republican-controlled Provo, Utah is way up!

A moment ago
Winston
W

A moment ago
Otis Mayfield