And The Number Of Bump Stocks Actually Turned In?

08 OCT 2019
And The Number Of Bump Stocks Actually Turned In?
BY HERSCHEL SMITH

1 day, 18 hours ago
The Washington Times.

The federal government collected fewer than 1,000 bump stocks during the run-up to a new ban in March, despite estimates that hundreds of thousands of the devices that mimic machine gun fire are in circulation, according to federal data provided to The Washington Times by the Justice Department.


As the nation marked the second anniversary Oct. 1 of the Las Vegas massacre, which prodded the Trump administration to ban bump stocks, the numbers offer a cautionary tale on the scope and resources needed to enforce any sort of gun buyback program.

Between the issuance of the final rule banning the devices in December 2018 and April 4, 2019, shortly after the prohibition took effect in late March, 582 bump stocks were “abandoned” to the Bureau of Alcohol, Tobacco, Firearms and Explosives, according to Justice Department records, and 98 bump stocks were kept as evidence.

The Times obtained the records through a Freedom of Information Act request.

The administration cited estimates that 280,000 to 520,000 bump-stock-type devices were in circulation when it published the final rule in December.

What do you think will happen when the FedGov demands that citizens turn over $1000 rifles which have been bought with the intent of bequeathing to their children for personal defense? 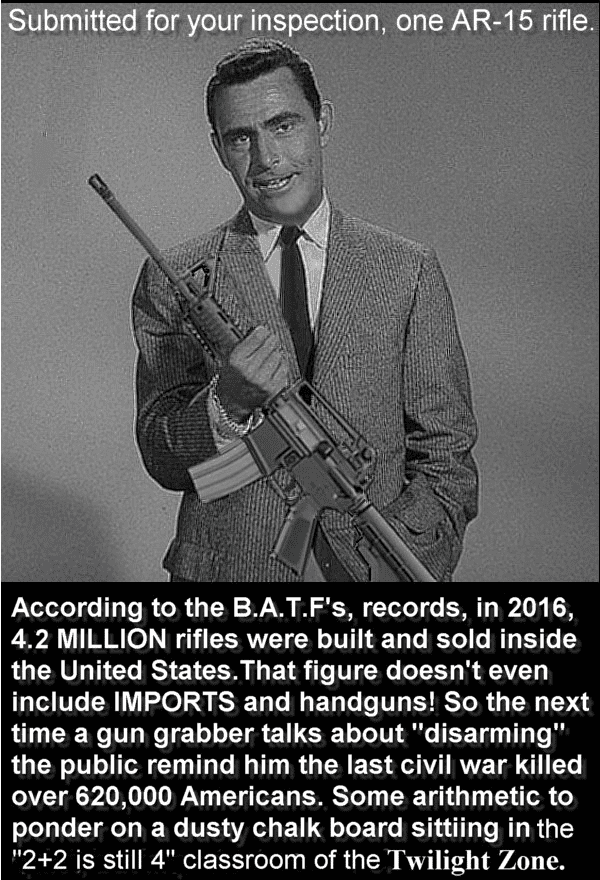 Banning bump stocks was nothing more than trump appealing to the knee jerkers.
95 percent of the country didnt even know what they were until Las vegas.
Its fucking stupid. Americans are stupid.
D

Doesn't really matter. Only any idiot would use a bump stock.
OP

TNHarley said:
Banning bump stocks was nothing more than trump appealing to the knee jerkers.
95 percent of the country didnt even know what they were until Las vegas.
Its fucking stupid. Americans are stupid.
Click to expand...

Not only do they demonize the shit out of him ......he was just a family man with NO criminal history ...or mental illness

Never list your weapons on line
Never ever ever
P

diver52 said:
Doesn't really matter. Only any idiot would use a bump stock.
Click to expand...

This is not and should not be the case. If the people you call "idiots" like to pay whatever a bump stock costs to do a magazine dump for chits and giggles, they don't need our permission.

The BATFE has admitted that they did not have the authority to ban bump stocks in the first place. They were forced to do it:

Secondary to that, there were two more important issues that Trump supporters and gun owners are neglecting to mention:

Perhaps the courts don't acknowledge certain parts of the Constitution, but you cannot make bump stocks illegal if they were legally owned before the ban. I suspect that is the driving force behind why owners of them are not complying with such an outrage

2) If the government plans on banning something and / or confiscating it, they must give you just compensation. That is in the Fifth Amendment. Trump could only ban bump stocks in the public interest AND private property includes personal possessions:

"The {United States Supreme Court} Court has also held that the government has a “categorical duty to pay just compensation” when it physically takes personal property, just as when it takes real property."

IF this is allowed to stand, the Democrats have clearly signaled that they will outlaw any firearms they don't like and force people to turn them in. Joe Biden says he will pay you for them, but fails to say if he will also pay for the magazines, ammunition, scopes, slings, lasers, etc. Hell, he can't find money for socialized medicine. Where are they going to get money to pay you for your weapons? They won't. They will use Trump's precedent and take what they want.
P

TNHarley said:
Banning bump stocks was nothing more than trump appealing to the knee jerkers.
95 percent of the country didnt even know what they were until Las vegas.
Its fucking stupid. Americans are stupid.
Click to expand...

Most of those 95% still don't know what they are, they just know they are bad.
You must log in or register to reply here.

What are the Limits of Free Speech?

Is Trump An Idiot?

There Is Evidence For God