Where are the Rs spending the most anti-ACA ad money? 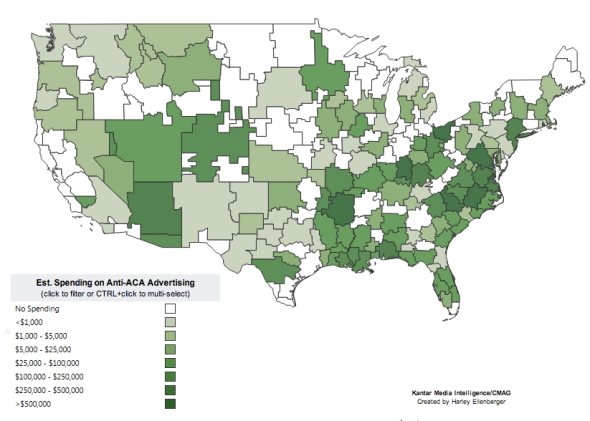 The most needy and the most ignorant.

Don't look to the right to do anything for their fellow Americans. They want to cause the most harm they can and this is just one part of that agenda.

"If you like your plan, you can keep it. Period"

The most needy and the most ignorant.

Don't look to the right to do anything for their fellow Americans. They want to cause the most harm they can and this is just one part of that agenda.
Click to expand...

You are just pissed that Republicans are using the low-information voter playbook, just like Democrats did in 2012.

Location
MD, on the Potomac River

Or maybe, just maybe, it is that low information voter who was duped and is being taken advantage of with big government.... they need to possibly be educated in this abomination

what is the point of this thread. those areas are likely hot spots for seats. i'm not sure why luddley assumed those areas have large amounts of ignorant people....bigotry i'm guessing.

Come on LN show the map for where the pro-ACA money is being spent so we have a comparison.

The Department of Health and Human Services has crowned a YouTube video entitled Forget About The Price Tag as the grand prize winner in a contest meant to encourage young people to sign up for Obamacare.

The video contest, announced in August  in partnership with a group called Young Invincibles  encouraged participants to produce clips filled with pro-Obamacare messaging.

McDonald, of course, is referring to the reasons young people should buy health insurance without worrying bout the price tag.
Click to expand...

Does this infuriate you luddly? Hmmmm?

Go away.
You must log in or register to reply here.

18-29 year old's skeptical about signing up for Obamacare

Shite Happens..And It Had To Happen To HER For Her To Finally Speak Out

FBI Warns Congress: Antifa Is Not A Myth - Take The Threat Seriously
2 3