A good overall look, updated often. Click on a column head to rank ascending or descending:

What political standard are they using to confirm a case of C-19? ... it takes up to a couple years to confirm these cases scientifically ... how are they accounting for cases that don't require medical intervention? ... just looking at California's numbers, they've tested less than 2% of the population ... this gives a fatality rate closer to 0.07% ... scaremongering much? ...

I like their way of looking at it. Tennessee has 46th lowest confirmed case fatality rate. Very good not to be #1.
OP

Not a surprise that the deaths per million rate of 9 of the top 10 states are run by Democrats.
R

Oregon isn't testing, their rates are near the bottom ...

That 68k number of deaths is actually the confirmed cases plus the assumed ones where there isn't any any lab data to support that conclusion. Which apparently is about half of the total.
OP

ReinyDays said:
What political standard are they using to confirm a case of C-19? ... it takes up to a couple years to confirm these cases scientifically ... how are they accounting for cases that don't require medical intervention? ... just looking at California's numbers, they've tested less than 2% of the population ... this gives a fatality rate closer to 0.07% ... scaremongering much? ...

Yes, too early to really have an accurate set of data. Sloppy or differing State standards of collection & definitions skew the numbers. But still a general notion is given.
R

Skull said:
Yes, too early to really have an accurate set of data. Sloppy or differing State standards of collection & definitions skew the numbers. But still a general notion is given.
Click to expand...

I agree ... the link doesn't claim to be scientifically accurate ... but it does give us a fairly good idea of what is happening ... and the numbers do seem apolitical, so the information is fair and useful for our immediate choices ... we can count the deaths in North Jefferson without taking our shoes off ...

I don't know how useful or trustworthy these numbers or any numbers are these days. About anything, politics and money have influenced just about everything. Who knows how many people were falsely diagnosed with COVID, or how many deaths were counted as COVID when it might have been something else? How much trust can you put in what you are told? I saw one report from West Virginia where a guy was listed as a COVID death when he wasn't even dead!

Consider this, and yeah it's from FoxNews:

"The idea that we are going to allow people to massage and sort of game the numbers is a real issue because we are going to undermine the [public] trust," he said. "And right now as we see politicians doing things that aren’t necessarily motivated on fact and science, their trust in politicians is already wearing thin."

['he' is Dr. Scott Jensen, a Minnesota family physician who is also a Republican state senator]

Jensen gave a hypothetical example of a patient who died while suffering from influenza. If the patient was elderly and had symptoms like fever and cough a few days before passing away, the doctor explained, he would have listed "respiratory arrest" as the primary cause of death.

"I’ve never been encouraged to [notate 'influenza']," he said. "I would probably write 'respiratory arrest' to be the top line, and the underlying cause of this disease would be pneumonia ... I might well put emphysema or congestive heart failure, but I would never put influenza down as the underlying cause of death and yet that’s what we are being asked to do here." [for COVID]

Jensen then told Ingraham that under the CDC guidelines, a patient who died after being hit by a bus and tested positive for coronavirus would be listed as having presumed to have died from the virus regardless of whatever damage was caused by the bus.

"That doesn't make any sense," he said.

Jensen also reacted to Dr. Anthony Fauci's response to a question about the potential for the number of coronavirus deaths being "padded," in which the NIAID director described the prevalance of "conspiracy theories" during "challenging" times in public health.

"I would remind him that anytime health care intersects with dollars it gets awkward," Jensen said.

"Right now Medicare has determined that if you have a COVID-19 admission to the hospital you’ll get paid $13,000. If that COVID-19 patient goes on a ventilator, you get $39,000; three times as much. Nobody can tell me, after 35 years in the world of medicine, that sometimes those kinds of things [have] impact on what we do.

"Some physicians really have a bent towards public health and they will put down influenza or whatever because that’s their preference," Jensen added. "I try to stay very specific, very precise. If I know I’ve got pneumonia, that’s what’s going on the death certificate. I’m not going to add stuff just because it’s convenient." 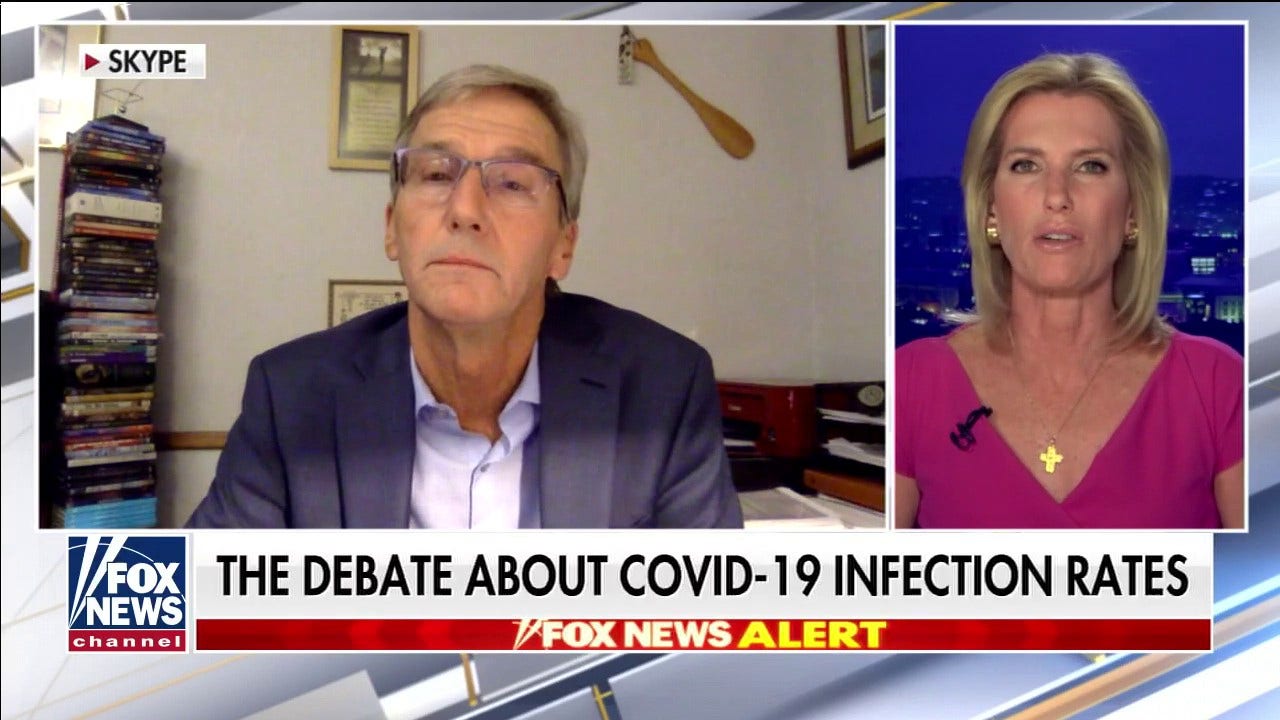 Dr. Scott Jensen, a Minnesota family physician who is also a Republican state senator, told "The Ingraham Angle" Wednesday that the Centers for Disease Control and Prevention's (CDC) guidelines for doctors to certify whether a patient has died of coronavirus are "ridiculous" and could be...

A moment ago
Ken Mac

Andrew Cuomo is no hero. He's to blame for New York's coronavirus catastrophe

Video shows Ahmaud Arbery Was caught breaking and entering an unfinished property, then towards McMichael‘s house
76 77 78