Security situation Report of the Secretary General on South Sudan

Despite their repeated pledges to end the fighting, the two parties continued

6 February, the IGAD Monitoring and Verification Mechanism released the latest

summary of violations of the Cessation of Hostilities Agreement, totalling

26 violations since its deployment on 1 April 2014. Ten of the violations were

SPLA and 12 to SPLM/A in Opposition, while four were attributed to

The security situation remained volatile during the reporting period, with

repeated clashes between SPLA and SPLM/A in Opposition forces, particula

Nassir and Renk counties. Fighting between armed youth aligned with the

Opposition and SPLA occurred on 20 November and 10 December, and on several

occasions between 29 December and 3 January, particularly in and around Nassir.

On 3 January, SPLA re

pulsed the armed youth to Kedbek, east of Nassir. The SPLA

took control of Kedbek on 12 January.

On 20 November, SPLM/A in Opposition reportedly attacked an area

kilometres south of Renk town, but were repulsed by SPLA. On 10 December,

anuary, SPLM/A in Opposition briefly took control of villages in

northern Renk County, near the border with Sudan, before withdrawing. On 18 and

Manyo County and Renk town, which

remains under SPLA control. In Maban

County, clashes between SPLA and SPLM/A in Opposition occurred on

November and on 8 and 9 January. Tensions also rose in Maban County in early

January between SPLA and the Maban Defence Force (a local pro

group) reportedly owing to the latter’s reluctance to integrate into SPLA, with the

January. On 19 and 23 December, exchanges of

shellfire were reported in Panyikang County. The situation in Ulang and Baliet

Major tensions continued in areas north and south of the state capital, Bentiu,

skirmishes concentrated around the oilfields in Unity State and in Pariang

County. On 18 November, the SPLA regained control of the oilfields in Unity,

kilometres north of Bentiu in Rubkona County, which had been contested since

January 2015, however, SPLA and SPLM/A in Opposition

east of Bentiu in Guit and Rubkona counties

January, clashes were reported in Pariang

County, with SPLA repulsing the Opposition northwards. On 30 January, UNMISS

border between Mayom and Rubkona counties, west of Bentiu

again on 19 and 23 December, resulting in the reported displacement of thousands

vilians. Each party controls parts of Pigi County, with SPLA reportedly in

The situation in Raga County has been tense throughout the reporting period.

Reports indicate that in

SPLA at Boro Medina and Raga towns in Raga County. The group has been blamed

for four ambushes that took place between 15 and 25 January, resulting, inter alia, in

the injury of the Raga County Co

mmissioner and up to 11 people killed.

December following the defection of SPLA

and claims were made that Kenyi and f

orces loyal to him were responsible for an

ambush of two trucks on the Juba

Staff for Moral Orientation and the commander of SPLM/A in

Equatoria Forces”. In January, SPLA and personnel of the National Security

Services detained Maadi and Acholi youth in Pageri, Magwi County, on suspicion of

sympathizing with Kenyi and SPLM/A in Opposition.

at the national and S

tate levels to stem the violence. In the most significant incident

of intercommunal fighting, in Rumbek East on 27 December, up to 48 people were

back to the national poli

ce from SPLA, which was deployed as a temporary

State, have had limited success. Moreover, the State

campaign is yet to take place amidst a cont

In Eastern Equatoria State, a cattle raid in Torit County on 6 December left

people dead. On 19 January, conflict between the Bari and Mundari tribes in Juba

farmers from the eastern counties.

Regional dimensions of the conflict

Regional involvement in the conflict continued during the reporting period

with the presence of a number of non

Residents in Juba fled as mortars and "heavy ground assault weaponry" were fired, the UN in Juba said. More than 100 people are reported to have been killed in recent clashes between supporters of President Salva Kiir and vice-president Riek Machar. A 2015 peace deal to end a 20-month civil war has failed to quell unrest. James Gatdet Dak, a spokesman for Mr Machar, blamed Friday's violence on government troops. "Our forces have been attacked at Jebel base. We hope it will not escalate," he told the AFP news agency. 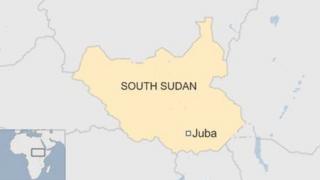 The violence is the first since Friday, when a half-hour gun battle with heavy weapons and artillery killed more than 100 people. Some estimates put the death toll at about 150. A South Sudanese journalist told the BBC that reporters counted at least 100 bodies, inside and outside the presidential palace's compound. Friday's exchanges were apparently sparked by a shootout between Mr Kiir's and Mr Machar's bodyguards. The two men met at the presidential palace on Friday.

South Sudan, the world's newest country, marked its fifth anniversary of independence from neighbouring Sudan on Saturday in lockdown. The country is so short of money that no official anniversary events were planned. Tens of thousands died and millions were displaced in the civil war that split Sudan five years ago.

How Obama Is Impeding Peace in South Sudan...

Obama Is Impeding Peace in South Sudan
Aug. 14, 2015 - By endorsing arbitrary deadlines, the president is getting in the way of a real solution to South Sudan's conflict

Even before British Major-General Charles "Chinese" Gordon and his followers were massacred in 1885, following the year long siege of Khartoum, Sudan and the nations that surround it have proven problematic to the West. At one time those problems could be safely ignored. Now, though, speed of travel has shrunk vast distances into blocks of appreciable time, the need for increased energy and mineral exploration has even the most barren wastelands considered for development and, most of all, what is commonly held to be basic human decency means the West can no longer turn a blind eye to religious and tribal oppression, especially if and when it leads to genocide.

In the 1990's the world's attention focused on Sudan once again as civil war between the country's ethnic Africans in the south and the Arab-dominated government in the north produced such suffering and depravation it could not be ignored. After much arm-twisting by the United States and other global powers, a peace-accord was reached in 2005 that included a provision that the southerners would, in time, be given the opportunity to form an independent state of their own. In January 2011 a referendum was held and, with 98.8 percent of the region voting in what is as free and fair an election as ever happens in that part of the world, a new nation, the Republic of South Sudan was born.

A man holds a South Sudanese flag during celebrations as part of the country's fourth independence day.​
Things going forward from that point have not been easy, as is often the case when new nations develop. A political power grab pushed President Salva Kiir of the ruling SPLM/A party to dissolve his cabinet and dismiss his vice president, Riek Machar, from office. To suggest this has proven disruptive to the foundations of the democratic process would be an understatement. And, as might be expected, the problems have been made worse as politics have been overlain with tribal divisions: The majority of Dinka, South Sudan's largest ethnic group, are backing Kiir; the Nuer, the second largest tribe, support Machar. Once again civil war rages, pushing more than 2 million people from their homes. For all that, the biggest stumbling block to peace, however, may be the Obama administration. American envoys are pushing both sides to sign a peace accord that neither side yet appears to be committed to fulfilling.

As Brian Garst of the non-profit Center for Freedom and Prosperity writes in a new whitepaper, "Stumbling Toward Peace in South Sudan," the United States and other global powers are attempting exert their influence in South Sudan, and they must be "mindful of the lessons learned to date and avoid ham-fisted efforts that prioritize smothering conflict over securing real stability." His paper seeks to "identify where the international community may be doing more harm than good." It is an excellent primer on the situation that provides a solid critique of the process of getting to peace that is currently being led by the Intergovernmental Authority on Development, an eight-country African trade bloc headquartered in Djibouti City.

Australia should go to war!

Dismantle the Department of Homeland Security...Shrink government to such a tiny little fraction it is nothing more than a unrecognizable afterthought
2 3

What makes police think they are special?
4 5 6

Capitol Police Deny David Bailey is Killer of Ashli Babbitt. What Goes On?
20 21 22