Why does Trump take valium? 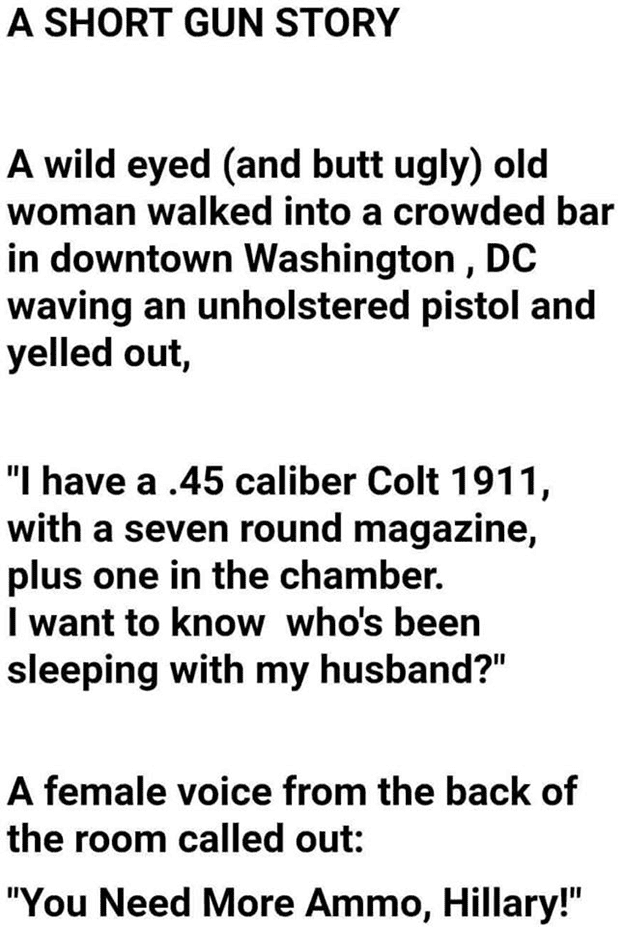 4 Surgeons walk into a bar.


Four surgeons were sitting around on lunch break, discussing what kinds of people they like to operate on.


The first surgeon said, “I like operating on librarians. When you open them up everything is in alphabetical order.”


The second surgeon said, “I like operating on accountants. When you open them up everything is numbered and organized.”


The third surgeon said, “I like operating on electricians. When you open them up everything is color-coded.”


The fourth surgeon said, “No no, operating on politicians is clearly the best, and also really easy.”


The other three surgeons looked at each other in disbelief. One of them asked why.


The fourth surgeon replied, “Because they are heartless, gutless, spineless, and their ass and head are interchangeable.”

A cannibal goes into a butcher shop to buy something nice for dinner. The owner greeted him and told him to look around. The cannibal began to inspect the meat case and noticed the market specialized in brain.

The owner responded with a deadpan look on his face, "Do you realize how many politicians it takes to get a pound of brains?"

A young Arab boy asks his father “What is that strange hat we are wearing?”
The father said: “Why, my son, it is a ‘chechia.’ In the desert it protects our heads from the intense heat of the sun.”
“And what is the long flowing robe we are wearing?” asked the boy.
“Oh, my son!” exclaimed the father “It is very simple. This is a ‘djbellah.’ As I have told you, in the desert it is not only very hot, but the sand is always blowing. Our djbellah protects the entire body.”
The son then asked: “But Father, what about those ugly shoes we have on our feet?”
“These are ‘babouches’ my son,” the father replied. You must understand that although the desert sands are very beautiful, they are also extremely hot. These babouches’ keep us from burning our feet."
"So tell me then..." continues the boy.
“Yes, my son…”
“Why are we living in Minnesota and still wearing all this shit?

The king wanted to go fishing, and he asked the royal weather forecaster the forecast for the next few hours. The palace meteorologist assured him that there was no chance of rain.

So, the king and the queen went fishing. On the way he met a man with a fishing pole riding on a donkey, and he asked the man if the fish were biting.

The fisherman said, "Your Majesty, you should return to the palace! In just a short time I expect a huge rain storm.”

The king replied: "I hold the palace meteorologist in high regard. He is an educated and experienced professional. Besides, I pay him very high wages. He gave me a very different forecast. I trust him.”

So, the king continued on his way.

However, in a short time a torrential rain fell from the sky. The King and Queen were totally soaked.

Furious, the king returned to the palace and gave the order to fire the meteorologist.

Then he summoned the fisherman and offered him the prestigious position of royal forecaster.

The fisherman said, "Your Majesty, I do not know anything about forecasting. I obtain my information from my donkey. If I see my donkey's ears drooping, it means with certainty that it will rain.”

So, the king hired the donkey.

And so, began the practice of hiring dumb asses to work in influential positions of government. And thus, the symbol of the democrat party was born. The practice is unbroken to this very day…

A young woman brought her fiancé home to meet her parents. After dinner, her mother told the girl's father to find out about the young man.


The father invited the fiancé to his study for a talk.


"So, what are your plans?" the father asked the young man.


"I am a biblical scholar," he replied


"A biblical scholar, hmmm?" the father said. "Admirable, but what will you do to provide a nice house for my daughter?"


"I will study," the young man replied, "and God will provide for us."


"And how will you buy her a beautiful engagement ring, such as she deserves?" asked the father.


"I will concentrate on my studies," the young man replied, "God will provide for us."


"And children?" asked the father. "How will you support children?"


The conversation proceeded like this...and each time the father questioned, the young idealist insisted that God would provide.


Later, the mother asked, "How did your talk go, honey?"


The father answered, "He's a Democrat. He has no job, he has no plans, and he thinks I'm God." 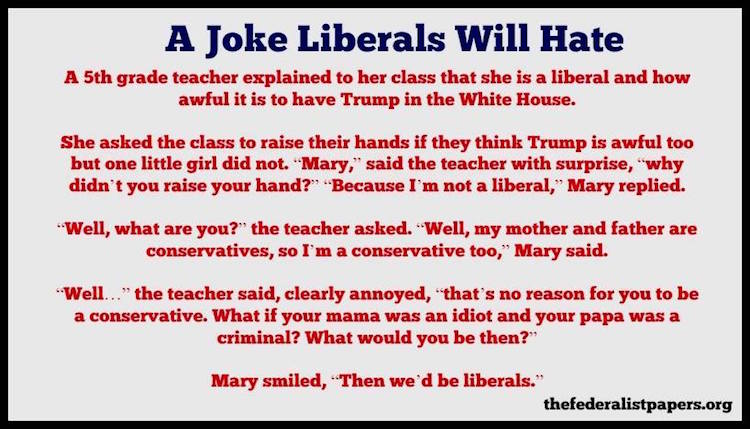 A golfer was involved in a terrible car crash and was rushed to the hospital.
Just before he was put under, the surgeon popped in to see him.
"I have some good news and some bad news," says the surgeon.
"The bad news is that I have to remove your right arm!"
"Oh God no!” cries the man. "My golfing is over! Please Doc, what's the good news?"
"The good news is, I have another one to replace it with, but it's a woman's arm.
I'll need your permission before I go ahead with the transplant."
"Go for it doc", says the man "As long as I can play golf again."
The operation went well and a year later the man was out on the golf course
when he bumped into the surgeon.
"Hi, how's the new arm?" asks the surgeon.
"Just great", says the businessman.
"I'm playing the best golf of my life. My new arm has a much finer touch and my putting
has really improved."
"That's great," said the surgeon.
"Not only that," continued the golfer, "my handwriting has improved, I've learned how to sew
my own clothes and I've even taken up painting landscapes in watercolors."
"Unbelievable!" said the surgeon, "I'm so glad to hear the transplant was such a great success.
Are you having any side effects?"
"Well, just one problem," said the golfer, "every time I get an erection, I also get a headache."

When Bill and Hillary first got married Bill said, “I put a box under the bed. You must promise never to look in it.” In all their 30 years of marriage, Hillary never looked. On the afternoon of their 30th anniversary, curiosity got the best of her and she lifted the lid and peeked inside. In it were 3 empty beer cans and $81,874.25 in cash.

She closed the box and put it back under the bed. Now that she knew what was in the box, she was doubly curious as to why there was such a box and with those contents. That evening, they were out for a special anniversary dinner. After dinner, Hillary could no longer contain her curiosity and she confessed, saying, “I’m so sorry, Bill. For all these years, I kept my promise and never looked into the box under our bed. However, today the temptation was too much and I gave in. But now I need to know, why do you keep the 3 beer cans in the box?”

Bill thought for a while and said, “I guess after all these years you deserve to know the truth. Whenever I was unfaithful to you, I put an empty beer can in the box under the bed to remind myself not to do it again.”

Hillary was shocked, but said, “Hmmm, Jennifer, Paula and Monica. I’m disappointed and saddened by your behavior; however, I guess it does happen and I guess 3 times is not that bad.”

Bill thanked her for being so understanding. They hugged and made their peace. A little while later Hillary asked Bill, “So why do you have all that money in the box?”

He answered, “Well, whenever the box filled up with empty cans, I took them to the recycling center.”

President Ted Roosevelt was bored hunting bears all the time, so he decided to travel to Africa. Over there, with a scientific mission to study preservation of animals, he started what today is known as a "safari".

At his return to the Oval office, he was at dinner time with the vice president and other invited people.

He told his story.

After walking for days into the jungle, he took a route by himself following a path to a prairie. He was admiring the horizon in front of him when he heard a roar very close to his place.

He turned his face and saw a lion. The animal started his run against him. The president immediately tried to charge his rifle but saw it was too late. The lion was barely a few feet from him and jumping to catch his prey.

The other hunters heard the roars of the lion and run fast to help the president. They killed the animal with 25 rounds. Unfortunately they had to leave the skin of the dead lion because was full of holes, so no memories of that moment was to be kept.

One of the invited was amazed with the story.

-Mr. president, you are a brave man. If I were you, in those same moments I should have sh*t myself several times.

The president smiled and said: 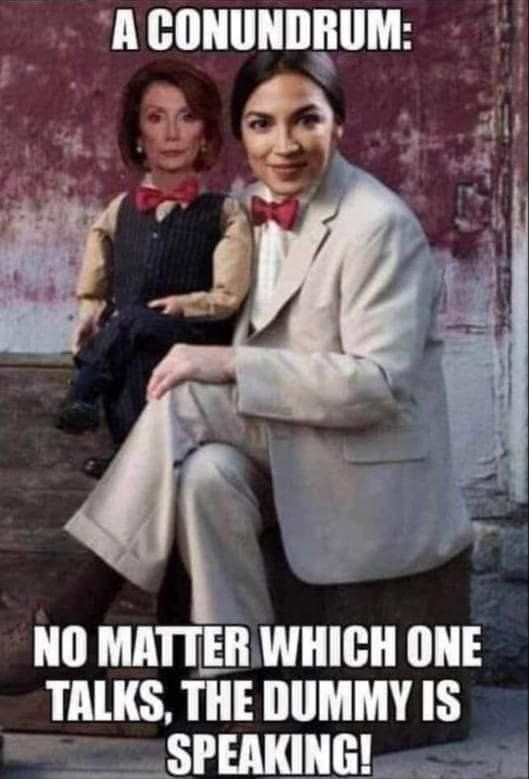 A bug-eyed, pencil-neck sissy from Burbank starts a sham impeachment with the intention of nullifying the will of the American electorate....

two_iron said:
A bug-eyed, pencil-neck sissy from Burbank starts a sham impeachment with the intention of nullifying the will of the American electorate....

NO SEX AFTER SURGERY

A recent article in the San Francisco Examiner reported that Nancy Pelosi has sued Stanford Hospital, saying that "after her husband had surgery there, he lost all interest in sex".

"Your husband was admitted for cataract surgery. All we did was correct his eyesight.”

The Cuban revolution finally took control of the island and Fidel Castro decided to send the hostages home.


In his communication with the American representative, Fidel demanded agricultural machines at exchange of each hostage. The president and congress rejected such demand, but under pressure of the families of the hostages, the exchange took place.

Tractors, plows, harrows, were given each for each hostage.

Celebrating later this transaction which was for Fidel Castro a victory against the “Yaquis’”, at the main plaza in the Havana, he directed his speech in a message given to Cubans.

-Today will be remembered for eternity. Our revolution will bring freedom against the American imperialism.

-They hate us and say that we are lazy, good for nothing, and we only love dancing pachanga all day long! Is that true?!

-No Fidel! – replied the people

-Do we pass all day long dancing pachanga?!

-Do we pass all day long dancing pachanga?! (And he moved his hips from one side to another like dancing)

-No Fidel! (And the people also moved their hips from one side to another like dancing)

...and they continued all day long up to late at night...
B

What would you say about a group of liberal lunatics covered in cement up to their necks? Not enough cement!
B

two_iron said:
A bug-eyed, pencil-neck sissy from Burbank starts a sham impeachment with the intention of nullifying the will of the American electorate....

......has a thing for young men!
You must log in or register to reply here.

B
The Tide Turns Toward Trump
2