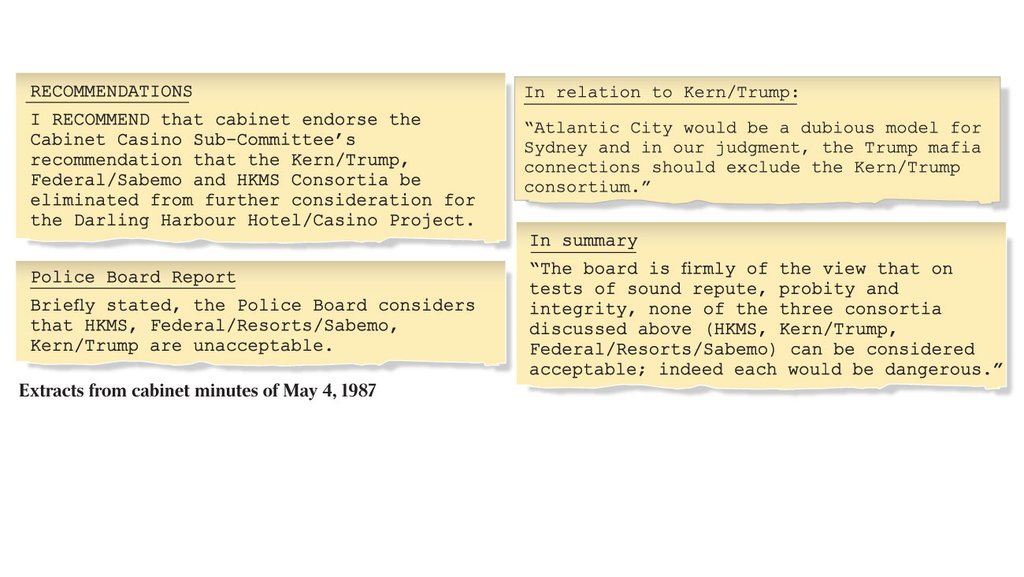 Donald Trump’s plan to build and operate Sydney’s first casino was killed off in 1987 by the NSW government on the back of a high-level police report that warned against the now-US President’s bid because of his “mafia connections’’.

The secret report by the NSW Police Board into the suitability of tenderers for the inner-city Darling Harbour casino project cautioned that it would be “dangerous’’ to go ahead with Mr Trump’s joint venture with the Queensland-based Kern Corporation, headed by the late developer Barry Paul.

Documents show that the Unsworth Labor cabinet met in May 1987 to discuss the assessment of the four tenderers for the project, which also included a financial report that concluded Mr Trump’s consortium had overstated projected revenues from the casino.

At the time the Kern-Trump consortium was making its play, Mr Trump owned two casinos in Atlantic City — Trump Plaza and Trump’s Castle — and was about to open a third with the Trump Taj Mahal.

Mr Trump had been approached by the Kern Corporation — a then successful developer of shopping centres, with strong ties to superannuation funds — to front and operate the casino.
Nocookies

Sydney, though another Two dozen Prawns on the Barbie!!!

How does the Greatest Business ManBaby lose so much?

Hmmm? I wonder if IT Pissed OFF their PM?
Yep!

First a Commy and now a Nazi.