Nigel Farage touring US- America is coming back

Sorry, libs. The greatest living Englishman is here in the colonies to help us return to greatness.

The people are rising up against Biden's Reign of Error. I think he realizes it too, as he even revoked the Mask Mandate this week, the main pillar of the Biden Regime. 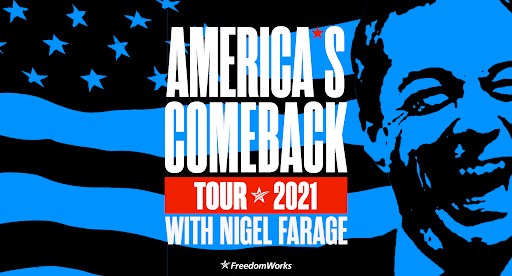 **WASHINGTON, D.C. --** FreedomWorks today announces the launch of its “America’s Comeback Tour” in association with Nigel Farage. The in-person tour will cover nearly a dozen states over the next month with the goal of energizing grassroots activists to begin to restore America’s founding...

What mask mandate from Biden?

Not to be a stickler, necessarily, although, words mean things (to the not publicly educated which BOTH sides subscribe to) but, from the article (I do read btw):

Therefore, it is critical that we maintain our republican institutions.

I wonder if he meant Republican institutions - there is a difference. This country was founded as a republic- the Republican Party is a major player in the Duopoly Party and BOTH sides subscribe to the paternalistic bullshit *policies* set forth and funded by a non-republican entity that uses coercion with the threat of force by a non-elected (by anyone) *agency* as a collection "agency" for the non-republican central bank- which controls the economy from centrally located banks-

Libertarians have been on the leading edge of making America great for years- again is nonsense- anything built on lies is not great, IF great is defined as freedom and liberty as it's constant- and the US gov't, with the "leadership" of the Duopoly Party, deeply and firmly entrenched in the "publicly educated" sponges, (minds for the not so bright), refuse republican institutions, or principles or values or traditions-

How Quid Pro Joe O'Biden Bama and his Grifter family got rich off his connections.

Why Would Democrats Practically Legalize Shoplifting?
4 5 6