The Libyans are going to have to stop this racist shit, most Gaddafi mercenaries have left the country weeks ago.

TRIPOLI, Libya  Rebel forces and armed civilians are rounding up thousands of black Libyans and migrants from sub-Sahara Africa, accusing them of fighting for ousted strongman Moammar Gadhafi and holding them in makeshift jails across the capital.

Virtually all of the detainees say they are innocent migrant workers, and in most cases there is no evidence that they are lying. But that is not stopping the rebels from placing the men in facilities like the Gate of the Sea sports club, where about 200 detainees  all black  clustered on a soccer field this week, bunching against a high wall to avoid the scorching sun.

Handling the prisoners is one of the first major tests for the rebel leaders, who are scrambling to set up a government that they promise will respect human rights and international norms, unlike the dictatorship they overthrew.

The rebels' National Transitional Council has called on fighters not to abuse prisoners and says those accused of crimes will receive fair trials.There has been little credible evidence of rebels killing or systematically abusing captives during the six-month conflict. Still, the African Union and Amnesty International have protested the treatment of blacks inside Libya, saying there is a potential for serious abuse.

Aladdin Mabrouk, a spokesman for Tripoli's military council, said no one knows how many people have been detained in the city, but he guessed more than 5,000. While no central registry exists, he said neighborhood councils he knows have between 200 and 300 prisoners each. The city of 1.8 million has dozens of such groups.

"We are building a Libya of tolerance and freedom, not of revenge," he said.

Oil-rich but with a relatively small population of 6.6. million, Gadhafi's Libya welcomed hundreds of thousands of black Africans looking for work in recent decades. Many young citizens of Mali and Niger who flocked to Libya in the 1970s and 1980s were recruited into an "Islamic Legion" modeled on the French Foreign Legion. In addition, Gadhafi's military recruited heavily from black tribes in Libya's south.

In February, witnesses reported African fighters shooting at protesters or being captured by anti-Gadhafi forces. Witnesses have described scores of mercenaries being flown in to put down the rebellion, although many of the fighters already were in Libya.

As a result, people with roots in sub-Saharan Africa and black Libyan citizens have been targeted by rebel forces in the messy and confusing fight for control of the country.

In the Khallat al-Firjan neighborhood in south Tripoli, Associated Press reporters saw rebel forces punching a dozen black men before determining they were innocent migrant workers and releasing them.

The Gate of the Sea club near Tripoli's fishing port became a lockup Monday night, when residents rounded up people in the surrounding area.

Guards at the club said they looked for unfamiliar faces, then asked for IDs. Those without papers or whose legal residences were distant cities were marched to the club.

This week, an armed guard stood by a short hallway that led through two metal gates onto a soccer field surrounded by high walls. There was no roof, so the detainees clustered against the wall to get out of the heat.

One black Libyan from the southern city of Sebha said he had worked for a Tripoli cleaning company. A French-speaking man from Niger said he had a shop nearby. One black Libyan said he was in the army but quit during the uprising.
Click to expand... 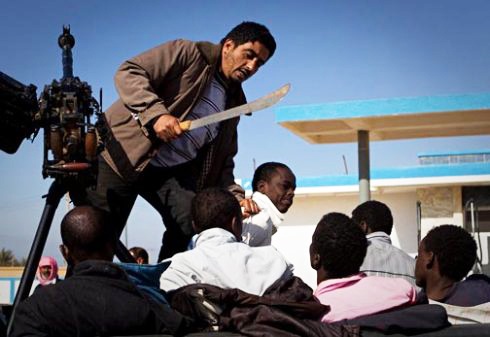 The Libyan rebels at a checkpoint in the western suburb of Ghout al-Shaal are handing out fliers to passing drivers to wish them a Happy Eid al-Fitr, the celebration that marks the end of a month of fasting for Ramadan. "Thank God for making our holiday into two holidays," the flier reads. "The Eid al-Fitr and the holiday of our victory over the injustice and oppression that the dictator [Muammar Gaddafi] and his cronies inflicted on us over the course of 42 years." Much of Libya is celebrating this week, after rebels pushed into the capital nearly two weeks ago, ushering in a new era.

But several miles away, just off the same stretch of coastal road is a camp full of men, women, and children who have lost a lot and gained little from Gaddafi's downfall. Hundreds of black African migrant workers have filled a small fishing port here, filtering in over recent months as they sought an escape from a country at war. Many were already refugees who had fled civil strife in Sudan or Somalia to find a better, safer life in a country that was once uniquely welcoming of sub-Saharan Africans. "Now I don't have any place to go," says Abdel Nasser Mohamed, who fled with his father from Sudan's war-torn Darfur region at the age of five, after losing half his family to tribal clashes.

Nearly 25 years later, Mohamed found himself on the run once again, as fighting engulfed the Libyan coastal city of Misrata where he grew up, and foreign Africans became figures of suspicion.

The makeshift camp he and the others now inhabit is woefully devoid of food, drinking water, and toilets. A representative for the international aid organization Doctors Without Borders, says that diarrhea and other diseases borne of poor hygiene are running rampant. And shelters consist of little more than blankets and rope strung haphazardly between grounded wooden fishing boats.

The displaced hail from countries across mostly West Africa, like Nigeria, Ghana, and Sierra Leone. Many have lived in Libya for years &#8212; even decades &#8212; and carry the legal papers to prove it; their presence rooted in Gaddafi's legacy of fostering close relationships with fellow African regimes, and recruiting loyalists from among their citizens. But for a man who often sought to portray himself as a leader of the continent, Gaddafi may have done more to divide his country's future than to encourage tolerance and respect.

It's popular knowledge among the predominantly Arab and Berber rebel ranks here that Gaddafi funded questionable African warlords and armies, even as his own population struggled. And at his home in Tripoli's Bab al-Aziziya compound, rebels hold up old pictures of Gaddafi posing with African children dressed in fatigues as further evidence of their former ruler's betrayal.

His alleged mercenaries &#8212; particularly, the men who populated the fearsome Khamis Brigade, which was used to assault the rebels over the course of their six month revolt &#8212; often came from the southern town of Sabha, or the neighboring countries of Mali, Niger, and Chad. The foreigners were alleged to receive benefits, and even fast-track residency, in exchange for their services as loyalists and fighters, a practice, whether real or exaggerated, that has fueled deep tribal, ethnic, and geographic mistrust.

The line between regime soldier and dark-skinned southerner or migrant worker has grown murkier in the fog of war. Throughout the conflict, the rebels have often been eager to offer reporters their proof of foreign fighters in the form of dark-skinned bodies, foreign passports, and ethnic charms that they've found along the front lines. And in the aftermath, foreign blacks and southern Libyans remain prime suspects, even as rebels sweep pacified neighborhoods of Tripoli.
Click to expand...

Read more: The Disinvited: The New Libya's New Racism - TIME
You must log in or register to reply here.

Who is more vicious?

Obama meddling in foreign Elections - What should the penalty be?
2

Nazis were not the first nor the last to use concentration camps; even Whites have been rounded up

20 Things Liberals Have Said Are Racist You Probably Won't Believe

Putin: Russia supports both Assad troops and rebels in battle against ISIS

Why God is Unknowable Unless He Reveals Himself
2

The Consternation Of A Conservative