I don't want 1 single US Troop left in Iraq if this goes into effect. 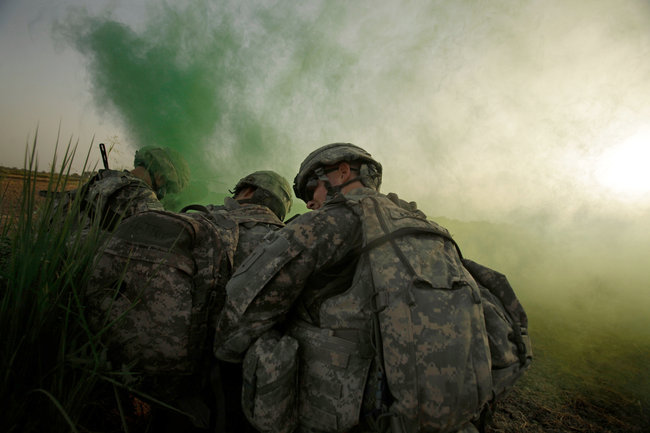 BAGHDAD  Iraqs political leaders announced late Tuesday that they had agreed on the need to keep American military trainers in Iraq next year, but they declared that any remaining troops should not be granted immunity from Iraqi law, a point the United States has said would be a deal breaker.

The statement, issued as the political leaders emerged from a meeting in the presidential compound, sent mixed signals as United States officials and the Iraqi cabinet negotiate whether any troops will remain after the first of the year, when the forces are scheduled to depart. American officials were scrambling on Tuesday night to decipher the announcement.

Less than three months before the last troops are scheduled to leave  close to 40,000 members of the military are in the country  Americans are increasingly frustrated at the slow pace of the discussions. The United States has called for a prompt decision, noting the logistical hurdles of moving ahead on a withdrawal while making contingency plans to leave some troops behind.

The meeting of Iraqs political leadership, which concluded around 10 p.m., was attended by Prime Minister Nuri Kamal al-Maliki; President Jalal Talabani; Mr. Malikis chief rival, Ayad Allawi; and several other high-ranking officials. Ali al-Dabbagh, the government spokesman, issued a statement saying the leaders had agreed that there was no need to grant immunity to trainers, rather ambiguous phrasing for a deal-breaking demand.

The spokeswoman for Mr. Allawis Iraqiya bloc, Maysoon al-Damluji, said the leaders had pressed Mr. Maliki for his stance on granting the troops immunity.

Eventually, Ms. Damluji said, we agreed on the necessity of having American training troops, and we agreed to not grant them immunity.

Mr. Dabbagh, the government spokesman, said any training from the Americans should help Iraq maintain the security of its borders, waterways and airspace, which American military leaders have said the Iraqis need help protecting.

An official for the United States Embassy in Iraq said the Americans were reviewing the statement and appreciate the democratic spirit displayed by Iraqi leaders in debating this important subject.

The issue is far from settled and will most likely be subject to further behind-the-scenes negotiations in the coming weeks, just as the troop withdrawal accelerates.

Immunity strikes a deep nerve among ordinary Iraqis because it would mean that American troops could not be prosecuted in Iraq. The issue evokes some of the worst horrors of the war here, from the Abu Ghraib prison scandal to the killing of civilians by Blackwater mercenaries. But it is also important to the United States to shield troops working in good faith under difficult and dangerous conditions.

Earlier this year, American officials considered a plan to allow significant numbers of troops to stay in Iraq under diplomatic authority, which was essentially an end run around the need for a new security agreement and parliamentary debate about immunity. For Iraqis, that idea evoked memories of mercenaries operating with impunity and sometimes killing civilians.

The idea was shelved after a Central Intelligence Agency operative in Pakistan who held a diplomatic passport was accused of murder, touching off an international controversy about the meaning of diplomatic immunity. That case prompted American government lawyers to insist that Parliament approve immunity for soldiers in Iraq.
Click to expand...

http://www.nytimes.com/2011/10/05/w...o-immunity-for-remaining-american-troops.html
You must log in or register to reply here.

Iraq aligns itself with US foes

Will American forces leaving Iraq forever a be an Iran win or TrumpO win?
15 16 17

L
Can we please agree that people who base their entire life and personality on being a gun owner are fucking annoying.
2 3 4

A moment ago
Wild Bill Kelsoe

Keep this antivaxxer in your Thoughts
2 3

Robert Kagan: Trump will run in 2024 and send America to 'its greatest constitutional crisis since the Civil War'
20 21 22

The bottom half of Manchinema, Kyrsten Sinema Hits A Record 8% Approval Rating
4 5 6

IF Trump were to win in 2024…how vengeful should we expect him to be…what kind of action will be taken on the southern border?
3 4 5