How To Win In Al-Anbar

Links to the original powerpoint and 'animation':

This is a bit of a tribute in felt. I read the "How to Win in Al-Anbar" Power Point, and I thought it was one of the greatest, simplest explanations you'll ever see of anything that goes on in Iraq-- all of which is pitched and violent and complicated by centuries of tradition and politics.

Since it's a Power Point/pdf, I thought we might make it move a little bit, so Katie and I went to the craft store, and this is what we came up with. I hope you enjoy. It's dedicated, of course, to the memory of Army Capt. Travis Patriquin-- the man who wrote it in the first place, who was killed Dec. 6, 2006 in Iraq. He left behind three young children and a wife, and with this, a glimpse into the mission for which he lost his life:
Click to expand...

Leader of IS in Iraq's Anbar 'killed'...

Abu Waheeb, formerly a member of al-Qaeda in Iraq, was killed in a raid on Friday, according to the Pentagon. "It is dangerous to be an Isil leader in Iraq and Syria nowadays," spokesman Peter Cook said, using an alternative name for the group. Waheeb has falsely been declared dead on several previous occasions. 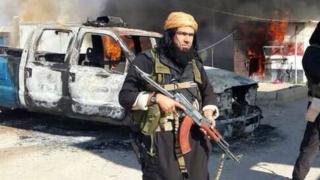 He was killed travelling in a vehicle in a town near Rutba, in Anbar province, Mr Cook said. The Pentagon said three other militants were killed in the raid, describing Waheeb as the IS "military emir for Anbar province". Born in 1986 and a former computer science student, Waheeb was often described on monitoring sites as a rising star among IS.

He was arrested by US forces in Iraq and sentenced to death but escaped prison in 2012, the following year gaining notoriety for killing a group of Syrian truck drivers travelling through Iraq. An international coalition led by the US has been carrying out air strikes on Iraq since 2014, when IS seized large swathes of territory.

Prominent Republicans Ask the pertinent questions on the WAR ON Iraq

Good To Hear This

Newsom pardons Sara Kruzan, imprisoned in 90s as a teen for killing man who trafficked her