TOKYO: A Japanese whaling ship that triggered a high-seas showdown with environmental groups and suffered a deadly fire returned to port Friday with a catch of 508 whales, despite having to cut its annual hunt short after the accident.

The homecoming, however, was dogged with questions, as authorities prepared to investigate the below-deck blaze that killed a sailor and crippled the ship as well as the anti-whaling protests that had earlier tried to block the hunt.

Journalists were being barred from the Tokyo wharf where the processing ship Nisshin Maru docked with its crew of 149. Japan's Fisheries said it would hold a news conference only next week after the investigation has progressed.

The black-and-red hulled ship, with the word "RESEARCH" emblazoned just above the waterline, slipped into port flanked by about 10 patrol boats for security, but there was no immediate sign of protests in the area.

Greenpeace issued a fresh condemnation of Japan's whaling program on Friday, calling for the damaged ship to be retired. It criticized Japan's whaling, ostensibly done for research purposes, as not yielding useful data on the marine mammals.
The Nissin Maru's return brings an early end this year's hunt in the icy waters off Antarctica, which had been scheduled to continue through the end of March. It was the first time in 20 years that Japan had to abort its whaling mission.

Still, the six-vessel fleet managed to kill 508 whales out of a target of 860. After scientific research is conducted on the animals, the meat will be sold to market where it is snapped up as a culinary delicacy by the Japanese.

The fire aboard the Nisshin Maru broke out last month, killing one crew member and leaving the ship unable to sail under its own power for 10 days.

The accident prompted strong protests from the New Zealand government and from the environmental group Greenpeace over potential oil and chemical spills.

The fleet had been earlier harried by protests by the group Sea Shepherd.

The Nisshin Maru was eventually repaired and able to return to Japan.

It is the second ship in the fleet to come home. Three more spotter ships are scheduled to return Saturday and the final vessel on Sunday.

Japan's fleet is part of a scientific whaling program that Tokyo says provides crucial data for the International Whaling Commission on populations, feeding habits and distribution of the mammals in the seas near Antarctica.

The hunts are allowed by the International Whaling Commission, but environmental groups have long condemned the hunts as a pretext for keeping commercial whaling alive after the practice was banned by the IWC in 1986.

http://www.iht.com/articles/ap/2007/03/23/asia/AS-GEN-Japan-Whaling-Ship.php
"Opinions that arise from the existing arrangements of economic and political power are treated as facts, while facts that are troublesome to the prevailing powers are likely to be dismissed as opinionated.
Those who censor the seemingly opiniated views see themselves as protectors of objectivity and keepers of heterodoxy when, in fact, they are the guardians of ideological conformity." Michael Perenti
W

Japan achieves its goal under a revised research whaling program...

The Fisheries Agency said the five-ship fleet finished its four-month expedition without major interference from anti-whaling activists who have attempted to stop it in the past.

Japan says the hunt was for ecological research. Research whaling is allowed as an exception to a 1986 international ban on commercial whaling. Opponents of the Japanese program say it’s a cover for commercial whaling because the whales are sold for food. The International Court of Justice ruled in 2014 that Japan’s Antarctic whaling program should stop because it wasn’t scientific as Tokyo claimed. Japan conducted nonlethal whaling research in the Antarctic in 2015, and revised its program in 2016 by reducing the catch quota to about one-third of what it used to kill. 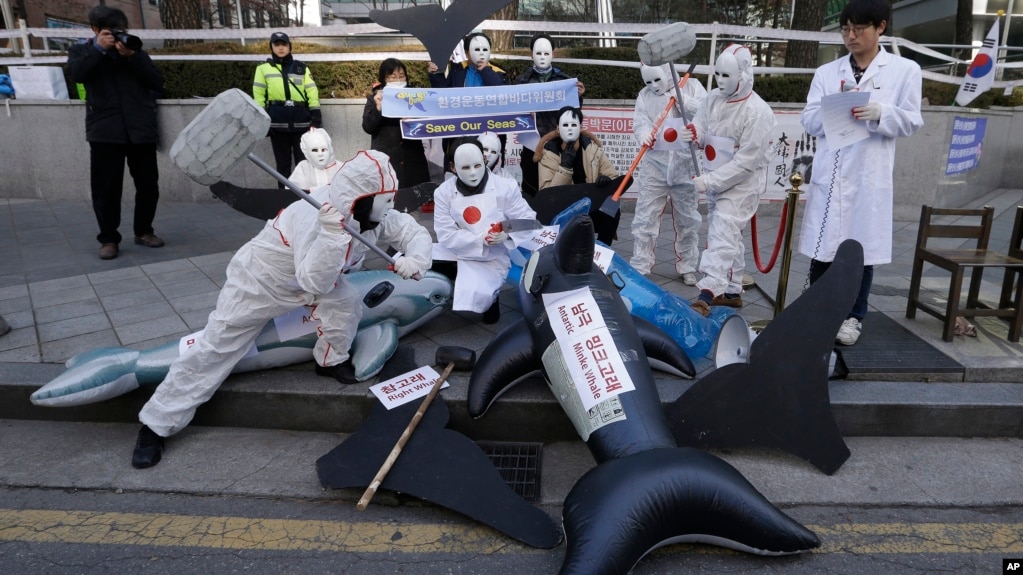 South Korean environmentalists beat whale-shaped balloons during a rally against Japan's whaling activities in the name of research near the Japanese embassy in Seoul, South Korea​
“It was great that we have achieved our plan. We will steadily continue our research toward a resumption of commercial whaling,” Fisheries Agency official Shigeto Hase said at a welcome ceremony in Shimonoseki, homeport for the fleet’s mother ship, Nisshin Maru. Officials said the whalers used parts of the whales to determine their age, nutrition and reproductive conditions. Opponents say such studies can be done using non-lethal methods.

Kitty Block, executive vice president of Humane Society International, an animal protection group based in Washington D.C., said Japan is needlessly killing whales every year. “It is an obscene cruelty in the name of science that must end,” she said in a statement.

Japan has hunted whales for centuries as a source of protein and cheaper alternative to other meats. Its whale catch has fallen in recent years in part because of declining domestic demand for whale meat. Protests by the anti-whaling group Sea Shepherd have also contributed to the decline. Critics say it’s a dying industry, but Japan’s government has spent large amounts of tax money to sustain the whaling operations, saying it’s a Japanese cultural tradition that must be preserved.

Exactly what kind of research requires 860 dead whales?
For Blood & For Soil
For Love & For Truth
For Faith & For Honor
For Our Past & For Our Future
For Now & Forever​
You must log in or register to reply here.

The Cruise of the Great White Fleet

A moment ago
ninja007