Egypt to withdraw ambassador in Israel over shootings

String tension is not infinite.

Egypt says it is withdrawing its ambassador to Israel over the deaths of five of its policemen on the two countries' border.

The five were killed as Israeli troops pursued Palestinian militants blamed for deadly attacks in southern Israel on Thursday.

Cairo said it held Israel "responsible for the incident", demanding an investigation and an apology.
Click to expand... 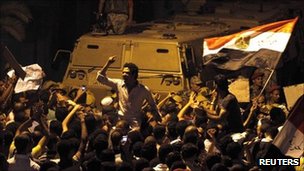 The five Egyptian policemen died as Israel was pursuing suspected militants from the Gaza Strip.

Since then, Israeli has carried out a series of air strikes on targets in Gaza, in which at least 14 Palestinians were killed.

The Hamas-run ministry of health in Gaza accused Israel of committing "war crimes".

On Friday, Palestinian militants fired more than 20 rockets into Israel.
Click to expand...

"The Egyptian ambassador to Israel will be withdrawn until we are notified about the results of an investigation by the Israeli authorities, and receive an apology from its leadership over the sad and hasty remarks about Egypt," the Cabinet statement said.
Click to expand...

How a Hudna is ended.

Hudna was first used in 628, when the Prophet Mohammed entered into a peace-pact with the elders of Quraysh. This pact was supposed to last for 9 years, 9 months and 9 days.
Less than two years later, when Mohammeds troops had gathered enough strength, they violated their oath and attacked the Quraysh, defeating their enemy and conquering the city of Mecca.

What does cease-fire really mean in the Middle East ?
And what do the Palestinians want? A three-month Islamic Hudna !
will give the Palestinians time to:
* Run more of their famous summer camps to recruit and train the next generation of terrorists
* Smuggle in better weapons and build more bombs
* Carefully prepare for their next wave of human-bombs.
And while the Palestinians pretend that this Hudna is really a truce, Israel will be expected to stop all its efforts to prevent terrorism....
Click to expand...

Toro said:
I'm not a Republican anymore
Click to expand...

G.T. said:
I say fag to my gay friends all of the time.
Click to expand...

The question Israel should be asking is why the militant terrorists ran to Egyptian police? Why didn't the Egyptian police shoot them or disarm them? If the terrorists were wearing Egyptian Uniforms, where did they get them?
The fact that an opinion has been widely held is no evidence whatever that it is not utterly absurd. Indeed in view of the silliness of the majority of mankind, a widespread belief is more likely to be foolish than sensible.
-Bertrand Russell

Facts are stubborn things, but statistics are more pliable
-Laurence J. Peters
A

Never trust muslims, mohammed proved it. Of course he was nothing more than a false prophet and a pedophile.

AmericanFirst said:
Never trust muslims, mohammed proved it. Of course he was nothing more than a false prophet and a pedophile.
Click to expand...

That is what the American Natives thought about the white man. Many, many peace agreements were broken by the US govt., and it citizens.
To live is to suffer~Fritz Lang-Film Director

RetiredGySgt said:
The question Israel should be asking is why the militant terrorists ran to Egyptian police? Why didn't the Egyptian police shoot them or disarm them? If the terrorists were wearing Egyptian Uniforms, where did they get them?
Click to expand...

Because since Mubarak left the Egyptians have not been keeping up their end on locking down the border with Gaza and Israel, its open season for Islamic Militants in the Sinai now.
You must log in or register to reply here.

*Next Dictator Of Libya*

How many children does the IDF need to murder in order to win this coldblooded war-?
3 4 5

Are there any Christians, and/or Conservatives, on here that have been vaccinated?

A moment ago
Ivan88

1 minute ago
Bald Eagle
B
F
Everyone wants to argue. What's the solution?
2

Do you follow the news of your ancestral home ?