I really am not interested in clicking on links with no dialogue explaining what one thinks the link says or shows.
The fact that an opinion has been widely held is no evidence whatever that it is not utterly absurd. Indeed in view of the silliness of the majority of mankind, a widespread belief is more likely to be foolish than sensible.
-Bertrand Russell

'People turned on Christians': Persecuted Iraqi minority reflects on life after Saddam
20 Mar.`13 -- Rana stepped out of church in Baghdad in December 2006 to find an envelope wedged against her car windshield. Inside was a bullet -- a message that meant she and her family were next on an assassins list.

They fled the city the next day, leaving behind a business, a home -- everything. "I didn't like Saddam Hussein, but he didn't bother the Christians," said Rana, 29, after a church service in London. "He was a dictator. When he went, the gangs came from everywhere." Rana isnt alone: Bombings, kidnappings and generalized violence unleashed by the 2003 U.S.-led invasion of Iraq that toppled Hussein caused hundreds of thousands of Christians to flee their homeland.

While there is no centralized source of information on the number of Christians who have left Iraq, it is estimated that there were 2 million there in the 1990s. That number has fallen to between 200,000 to 500,000 today, according to church leaders. Rana, who like others interviewed would not give her last name because of fear for the safety of relatives still in Iraq, is now part of a congregation that worships at Holy Trinity Brook Green, a Roman Catholic church in West London.

The congregants -- Syriac Catholics whose services are conducted in Aramaic, the language spoken by Jesus -- are part of the estimated 2,500 Iraqi Christians thought to live in the U.K. In a pew near Rana sat Wasseem, a 26-year-old who arrived in the U.K. five months ago. The murder of his friend Rariq haunts him, Wasseem said through a translator. Rariq, also a Christian, was a driver for American forces in Baghdad and was kidnapped on his way to meet Wasseem. Rariqs dismembered body was returned to his family five days later.

Wasseem received a handwritten death threat himself. Terrified, he decided to stay in his village in northern Iraq, he said. While safe, the predominantly Christian area offered no jobs, and he soon fled the country. Extremists haven't targeted only individual Christians and their families. On Oct. 31, 2010, gunmen stormed Our Lady of Salvation Church in Baghdad during Sunday Mass, taking more than a hundred hostages. When security forces tried to free those held, the attackers detonated explosives. At least 58 people were killed, including two priests.

Pakistan acquits 112 in case of torching Christian homes over blasphemy rumour
January 29, 2017 - A Pakistani court acquitted 112 suspects in the 2013 torching of hundreds of Christian homes in the eastern city of Lahore over a rumour that one of the residents there had blasphemed, a lawyer said on Sunday.

In March 2013, more than 125 homes in Lahore's Josep Colony were burned by a mob of more than 3,000 Muslims responding to rumours that a local Christian man, Sawan Masih, had made derogatory remarks about the Prophet Mohammad. No one was killed in the incident but there was widespread damage to the property of the mostly destitute Christians living in the neighbourhood. Two churches and dozens of Bibles were also desecrated in the attack.

Defence lawyer Ghulam Murtaza Chaudhry said an anti-terrorism court in Lahore had acquitted 112 people accused of torching and ransacking hundreds of houses. "They were acquitted by the court because of lack of evidences against them," Murtaza told Reuters. "The state witnesses could not identify the accused and their statements were also contradictory." All 112 suspects were already out on bail. A road sweeper in his late twenties, Sawan Masih told police after his arrest on blasphemy charges that the real reason for the blasphemy allegation was a property dispute between him and a friend who spread the rumour.

Police beat and detain a Pakistani Christian protester during a demonstration against Saturday's burning of Christian houses and belongings in Badami Bagh, Lahore​
In Pakistan, conviction under the blasphemy laws can carry a mandatory death sentence. Masih was sentenced to death in 2014, a decision he has appealed. Critics of Pakistan's blasphemy laws say they have long been used by individuals and religious groups to settle disputes. This month, the Pakistani Senate's human rights panel said it would debate how to prevent the country's blasphemy laws being applied unfairly, the first time in decades that any parliamentary body had considered a formal proposal to stop the abuse of the blasphemy laws.

Many conservatives in Pakistan consider even criticising the laws as blasphemy, and in 2011 a Pakistani governor, Salman Taseer, was assassinated by his bodyguard after calling for reform of the laws. His killer Mumtaz Qadri was hailed as a hero by religious hard-liners. Tens of thousands of supporters attended his funeral after he was executed last year and a shrine was built over his grave soon after his burial. Hundreds of Pakistanis are on death row for blasphemy convictions.

American pastor Andrew Brunson has been imprisoned in Turkey since October 2016...

Prosecutors Call For Lengthy Sentence For US Pastor in Turkish Prison
March 19, 2018 – American pastor Andrew Brunson faces up to 35 years in a Turkish prison after prosecutors presented a court with an indictment demanding a 20-year term for espionage and another 15 years for committing crimes on behalf of terror organizations.

The 50-year-old evangelical pastor from North Carolina, who has lived in Turkey for more than two decades, has been incarcerated since late 2016, in a case that prompted personal appeals by President Trump and senior members of his administration to the Islamist leader of the NATO member-state. Turkey’s state-run Anadolu news agency reported that the prosecutors’ prison sentence demand had been “accepted” by a court in the city of Izmir on Friday. However, the American Center for Law & Justice (ACLJ), which is advocating for his freedom, says that according to Brunson’s Turkish lawyer, the prosecutors are disputing that that step has yet been taken. “Since the case remains sealed, we will have to wait for the coming weeks to see how this situation plays out,” said the ACLJ. “In the meantime, Pastor Andrew remains behind bars, separated from his family, now for almost a year and a half.”

According to the Anadolu report, Brunson is accused of carrying out espionage activities “under the guise of missionary operations,” and of working on behalf of two entities viewed by the state as terror groups – the Kurdistan Workers’ Party (PKK) and the so-called Fethullah Gulen Terrorist Organization (FETO). The PKK, which is also a U.S.-designed foreign terrorist organization, has been waging a separatist struggle with the Turkish state for three decades. With regard to FETO, Turkey accuses Gulen, a U.S.-based Turkish cleric and former close ally of President Recep Tayyip Erdogan, of organizing a failed coup attempt in 2016 and is demanding that the U.S. extradite him. Gulen denies responsibility. 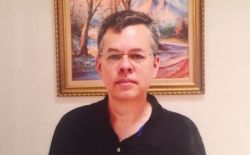 Erdogan last fall suggested Turkey could free Brunson in exchange for Gulen, a move that led critics in the U.S. to accuse him of effectively holding the pastor as a hostage. The indictment against Brunson, according to the Anadolu report, cites witnesses making various claims about a range of alleged activities, including:

--converting Kurds to Christianity and aiming to establish a Kurdish state for them (it noted that Brunson’s church held separate congregations for Kurds and used a Bible translated into Kurdish);

--trying to divide Turkey into pieces and giving “a small part to the administration” to FETO;

--helping formerly imprisoned PKK members to flee the country; and

--having prior knowledge of the coup attempt and expressing sadness at its failure.

Some pro-government media outlets have raised even more far-fetched scenarios, accusing Brunson of being a “high-level CIA agent” and even of masterminding the coup attempt – although it’s not clear whether those allegations are included in the indictment.

this is why we fight against islamo nazi's

It's FJB Saturday yo
2

S
we don't have to be enemies

S
Why did israel support Azerbaijan against Armenia?

The Interesting Lives of Babies

A President Betrayed by Bureaucrats: Scott Atlas’s Masterpiece on the Covid Disaster