China is building its second aircraft carrier, which is expected to take six years, and the country aims to have at least four such ships, Chinese and Hong Kong media reports said on Sunday.

After two decades of double-digit increases in the military budget, China's admirals plan to develop a full blue-water navy capable of defending growing economic interests as well as disputed territory in the South and East China Seas.

The country's first aircraft carrier, the Liaoning - a Soviet-era ship bought from Ukraine in 1998 and re-fitted in a Chinese shipyard - has long been a symbol of China's naval build-up.

Successfully operating the 60,000-tonne Liaoning is the first step in what state media and some military experts believe will be the deployment of locally built carriers by 2020.

In comments carried on Chinese news websites, Wang Min, the Communist Party boss of the northeastern province of Liaoning, where the first carrier is based, said the second carrier was being built in the port city of Dalian.

Its construction would take about six years, and in future China would have a fleet of at least four carriers, Wang told members of the province's legislature on Saturday, the reports added.

Dalian is the port where the existing carrier was re-fitted for use by the Chinese navy.

Some of the reports about the new carrier were apparently latter removed from the Internet, as links to the stories did not work.

Hong Kong's South China Morning Post, citing unnamed military sources, said the reports may have been removed either because the government wanted the construction to be low profile or because Wang did not have the authority for such an announcement.

The Defense Ministry did not respond to a request for comment.

The Liaoning successfully executed more than 100 tests, including those of its combat systems, during drills in the disputed South China Sea last month.

The exercises off the coast of Hainan Island marked not only the first time China had sent a carrier into the South China Sea but the first time it had maneuvered with the kind of strike group of escort ships U.S. carriers deploy, according to regional military officers and analysts.

Uncle Ferd says Hagel's checkin' to see if a 200 million man army will fit on it...

A senior defense official said Hagel requested the visit, which comes a day after he told reporters that China must better respect its neighbors  a pointed allusion to Beijing's ongoing territorial dispute with Japan and others over remote islands in the East China Sea. He also has continued to urge Beijing to be more transparent about its expanding military.

China spent a decade refurbishing the derelict Soviet-era carrier bought from Ukraine before commissioning it as the Liaoning in 2012. It moved to Qingdao in February 2013 and is part of a major expansion of the Chinese navy that includes sophisticated new surface ships and submarines. Early this year the Liaoning completed sea trials in the South China Sea. The official Xinhua News Agency said the carrier tested its combat system, conducted a formation practice and "attained the anticipated objectives."

On Dec. 5, early in the Liaoning's trial run, one of the Chinese ships accompanying it was involved in a near collision with a U.S. Navy cruiser, the USS Cowpens, when it was operating in international waters in the South China Sea. U.S. Navy officials said the Cowpens maneuvered to avoid the collision, but it marked the two nations' most serious sea confrontation in years.

At the time, a Chinese media report said the U.S. ship got too close to the Liaoning. Hagel is on a 10-day trip to the Asia Pacific region and was leaving Japan Monday to travel to China. He is scheduled to meet with senior Chinese leaders before traveling to Mongolia, then returning home.

It is showing the improvement in Chinese technology.
W

Growing China military budget may shift power perceptions in Pacific
April 21, 2014 ~ Chinas recent announcement that it would increase defense spending by 12.2 percent in 2014 is making some American allies nervous in a region where perception matters and the possible flashpoints are numerous.

Those countries, mainly Japan and the Philippines, have come to rely on the U.S. military for protection from a neighbor who seems set on creating instability by expanding and intensifying territorial claims to disputed waterways, airways and islands in the Pacific. Those actions  coupled with U.S. plans to scale back military spending for the next several years  have led to the perception that China is rising as the U.S. slips. That perception may be even more important in countries sitting on the fence, like Vietnam, Cambodia, Malaysia and Myanmar, which only recently started backing off from its close ties with China.

In reality, Americas $495.6 billion defense budget dwarfs the $132 billion in spending planned by China this year, but some lawmakers in the region find little comfort in that fact, analysts say. It will take China a long, long time before its budgets will effectively alter the military balance with the U.S., said Jonathan Holslag of the Brussels Institute of Contemporary China Studies. But thats not the main concern. While the U.S. still has some scope to respond, neighbors are getting much more nervous Japan, Vietnam and the Philippines all know that they could be the first victim if the balance of power shifts at Americas detriment. In recent months, China has done its best to look like the bully on the block.

Late last year, it announced a new air defense identification zone over a broad swath of the East China Sea, requiring foreign aircraft to report flight paths and follow other regulations if they enter the zone. Days after the announcement, U.S. Defense Secretary Chuck Hagel made it clear that the U.S. has no intention of complying. This announcement by the Peoples Republic of China will not in any way change how the United States conducts military operations in the region, Hagel said. Then on March 9, China entered Japans airspace, flying a surveillance plane and two bombers between Japans Okinawa and Miyako islands. Japans Air Self-Defense Force responded by scrambling its fighter jets. The same day, Chinese Coast Guard vessels prevented two civilian ships contracted by the Philippine Navy from resupplying and rotating Philippine forces at its Ayungin Shoal, Philippine officials said.

Other incidents include Chinese submarines encroaching on Japans outlying islands in 2013 and Chinese coast guard patrols around the disputed Senkaku islands in 2012. Earlier this year, Chinese vessels drove Filipino fishermen away from the Scarborough Shoal with water cannons and issued fishing regulations that would require foreign vessels to obtain Chinese approval before casting nets in the South China Sea. What we are seeing is just the beginning of an effort of China to break through the security perimeter that the U.S. traditionally tries to maintain in the Western Pacific, Holslag said. China knows that it can only recover what it calls lost territory if the U.S. is kept at a distance. I dont think that the security dilemmas in Asia are going to have a peaceful ending, he said. All these territorial disputes will ultimately be decided by power and probably also military power.

Time for Washington to park some nuke missiles in the Australian outback, ready to fire at China.

It's already guiding its drones from there.

Former personnel at the Australian-American base have described the facility's success in locating and tracking al-Qaeda and Taliban leaders - and other insurgent activity in Afghanistan and Pakistan - as ''outstanding''.

Starry skies, clear shots could be had at China.
Beijing, Shanghai etc all turned to ash with the push of a few buttons.

Or what about building a giant satellite ray gun as shown in the movie "Under Siege 2"?
And just zap Chona out of existence with it.


Of course China is increasing its military budget...its ambition to own and rule the world is perfectly clear.
Germany and Japan failed...China will not.

Why China is buying up the US- MSN Money

Why China is buying up the US

From pork to theaters to oil and gas, Chinese companies are snapping up U.S. assets
W

China wants carrier off US coast...

China's lone aircraft carrier is prowling the Pacific as the country seeks to assert its military might and build up its naval warfare capabilities. The Liaoning carrier's J-15 fighter jets practiced air confrontations and air refueling in the Yellow Sea late last week before the ship and its flotilla of escorting frigates and destroyers headed into the open Pacific beyond Taiwan and Okinawa. On Monday it headed to the South China Sea -- the site of regional tensions caused by China building fortifications on disputed islands. It's a move that hasn't gone unnoticed by China's Asian neighbors.
Taiwan sounded a note of alarm, with its defense minister emphasizing the need for vigilance. "The threat of our enemy is growing day by day. We should always be maintaining our combat alertness," said Taiwan Defense Minister Feng Shih-Kuan. 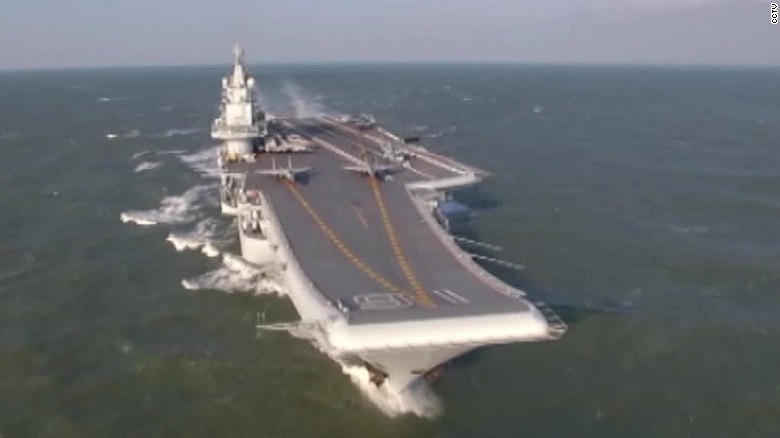 Japan's Defense Ministry, meanwhile, said it's the first time it could confirm the Liaoning, which China bought from Ukraine in 1998, then rebuilt and commissioned in 2012 as a training vessel, had gone into the open Pacific. "We are taking notice of this event, which indicates China is expanding its ability to engage in maritime warfare," Japanese Chief Cabinet Secretary Yoshihide Suga said. And it looks like that's exactly the point China's trying to make clear.

A warning for Eastern Pacific

China's state-run Global Times media agency published an editorial on Christmas Day, timed to coincide with the aircraft carrier Liaoning's maneuvers. The piece called on China to build up its fleet of aircraft carriers, make them combat ready, sail them to Eastern Pacific and look to set up naval supply bases in South America. The Global Times also said the drill is a sign the Liaoning's combat capability has been enhanced and its areas of operation expanded, and could soon include the Eastern Pacific, including off the US West Coast. "When China's aircraft carrier fleet appears in offshore areas of the US one day, it will trigger intense thinking about maritime rules. "If the fleet is able to enter areas where the US has core interests, the situation when the US unilaterally imposes pressure on China will change," the Global Times said. 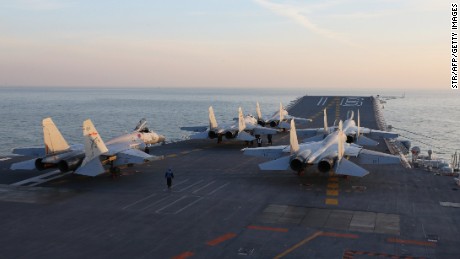 Chinese J-15 fighter jets wait on the deck of the Liaoning aircraft carrier​
The editorial called on China to speed up construction of homemade aircraft carriers "so as to activate their combat." China is believed to have one new carrier near completion and another about to start construction, said Carl Schuster, a professor at Hawaii Pacific University and former director of operations at the US Pacific Command's Joint Intelligence Center. But China's ability to pose a long-range threat with aircraft carriers is a long way off, he said.

Japanese WWII soldier who hid in Philippine jungle until 1974 dies

Teacher admits “I was wrong a out the Democratic Party”
2

Will California secede if Don wins?
3 4 5

College football is back!!